Chinese president Xi Jinping has given Canadian Prime Minister Justin Trudeau a well-publicized dressing-down, accusing him of leaking to the media the contents of a meeting between the two leaders about alleged Chinese interference in the 2019 federal election.

The confrontation has grabbed attention around the world and sparked debate about the ways diplomatic conversations are communicated to the public. 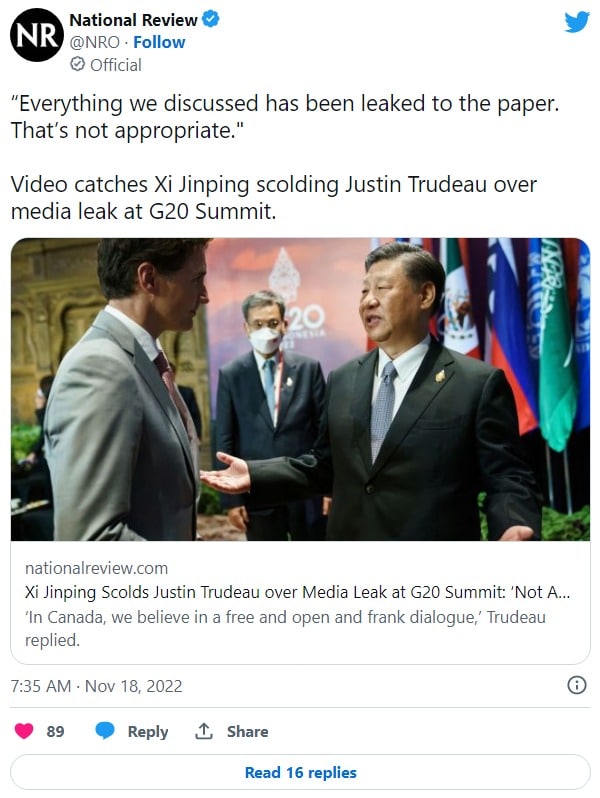 It’s also an object lesson in diplomatic communication as Xi was apparently trying to push Canada back towards an earlier Canadian stance that accepted closed-door discussion. Chinese leaders believe they can push Canada around, because Canadian governments have been broadcasting for decades that they don’t mind being pushed around.

That’s one reason why China feels free to arrest Canadian citizens like Huseyin Celil, “re-educate” Uighurs and thumb its nose at the global human rights system.

To see how we got here, we need only look to Jean Chrétien’s Liberal government of the 1990s.

Canada was among the world’s top enablers for Chinese Communist Party rights violations. In the 1990s, it helped the CCP undermine the international human rights system. We’re now living with consequences of an eroded, weakened rights system.

Beginning in 1997, Canada, along with other countries, began to hold what they called “bilateral human rights dialogues.” Under the Chrétien government, Canada opened three dialogues — with China, Cuba and Indonesia. Not coincidentally, all three were countries that were then criticized by Canadian human rights activists for their poor human rights records.

The three new “dialogues” were a government effort to demonstrate some action on rights without actually imposing any sort of sanctions.

The Chrétien Liberals opposed any sort of concrete action to pressure China on human rights, and just embraced trade. After all, they argued, trade would make everybody wealthier, and that would lead to more democracy.

How did that work out?

Judging by recent events, not so well. 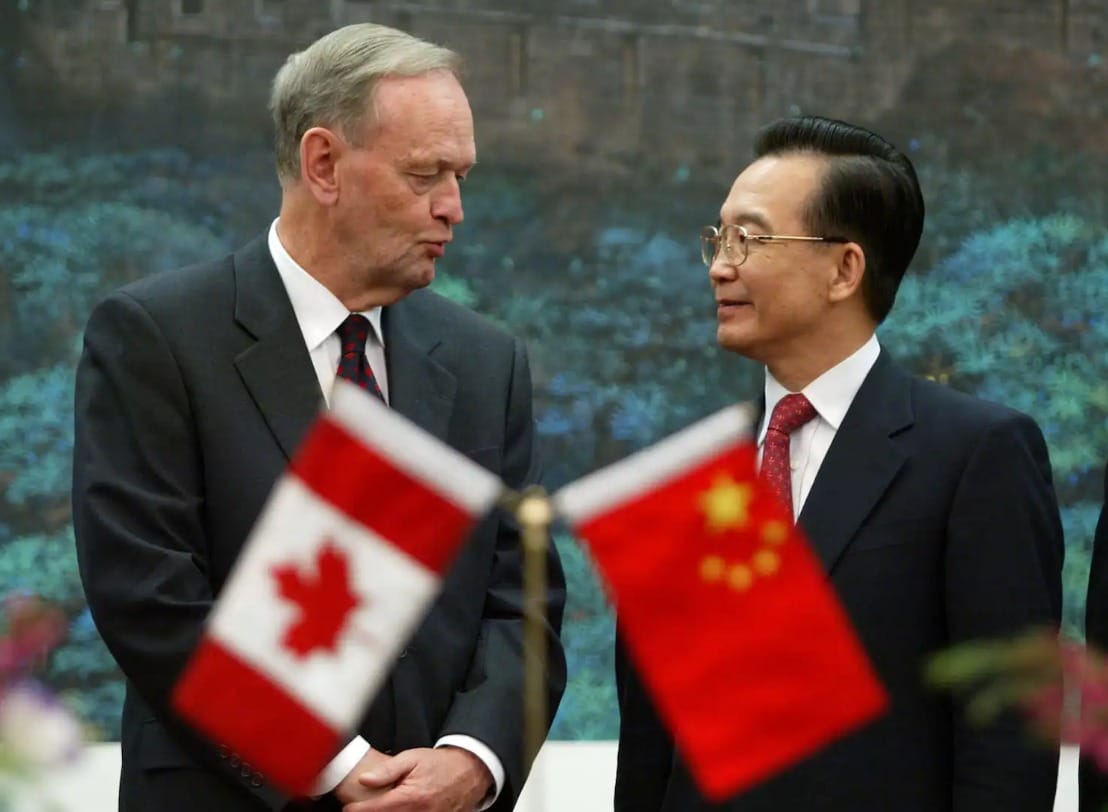 Far from changing things, these supposed human rights dialogues became an end in their own right, showing few measurable results and freezing out meaningful participation by civil society. They became an excuse to avoid multilateral action.

The dialogue with China ended in ignominious failure.

Canada opened a “dialogue” with China in 1997. At the same time, it stopped sponsoring an annual resolution on human rights in China at the United Nations Human Rights Committee. The Chrétien government called this u-turn “constructive engagement.”

Instead of public criticism, the defence of this tactic went, Chrétien would bring up human rights quietly and privately while he was visiting China on his travelling jamborees to promote Canada-China trade — trips that he insisted on calling “Team Canada.”

Providing an assist to China

After the Tiananmen Square massacre in 1989, the Communist government in China started calling for “dialogue” about human rights with western countries. Premier Li Peng, the “butcher of Tiananmen,” told the UN:

“China values human rights and stands ready to engage in discussion and co-operation with other countries on an equal footing on the question of human rights.”

What that meant was talking, quietly, in closed sessions, one-on-one. In open sessions, countries can advocate together with human rights groups. Behind closed doors, with only two governments present, Canada’s voice is that of a pipsqueak — and easy for the CCP to ignore.

“Bilateral human rights dialogues” replaced multilateral pressure. China could not have succeeded on its own. The system changed because governments like Canada’s helped it.

The result: China managed to alter international human rights norms at the UN, so much so that it’s no longer possible to even hold a debate on Uighur rights at the UN Human Rights Committee.

Why did Canada help China’s leaders undermine human rights at the UN? The Chrétien government wanted trade with China.

Though Stephen Harper would criticize this valuing of “the almighty dollar” ahead of human rights, his own government ended up hugging China just as closely.

As foreign affairs minister, John Baird shamelessly (and falsely) called China an “ally.” Harper signed a major trade deal with China, returning to the bipartisan status quo on the Chinese. 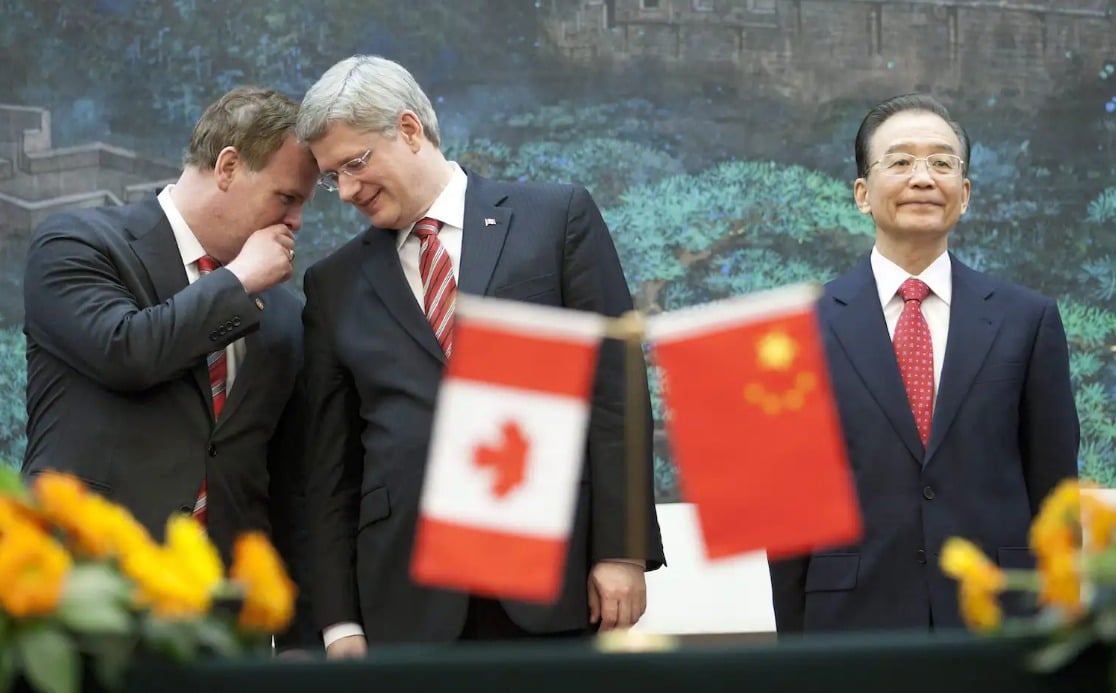 Governments of both parties wanted trade. And both were willing to sacrifice human rights to get it. If previous governments had not aided and abetted China’s campaign to undermine the UN human rights system, we might not be where we are today with China.

It is this closed-doors style of bilateral relationship that Xi wants to force Trudeau back into, as he publicly showed in hectoring Trudeau in Bali.

He thought he could do so, because this is the lesson that the Chrétien and Harper governments conveyed to China’s leaders: don’t take us seriously when we talk about rights.

It’s a lesson that it will take a long time to overhaul – if the Trudeau government even truly wants to.

This article was originally published in The Conversation on 18 November 2022. It can be accessed here: https://theconversation.com/why-did-xi-scold-trudeau-maybe-because-canada-spent-years-helping-china-erode-human-rights-194899

David Webster – teaches Human Rights Studies at King’s University College, Western University and is also adjunct research professor at Carleton University. His books include Challenge the Strong Wind: Canada and East Timor 1975-99 and Fire and the Full Moon: Canada and Indonesia in a Decolonizing World. He is the editor of Flowers in the Wall: Truth and Reconciliation in Timor-Leste, Indonesia and Melanesia and co-editor (with Greg Donaghy) of A Samaritan State Revisited: Historical Perspectives on Canadian Foreign Aid. Webster is a fellow of the Wilson Institute for Canadian History at McMaster University and the Graham Centre for Contemporary International History at the University of Toronto.