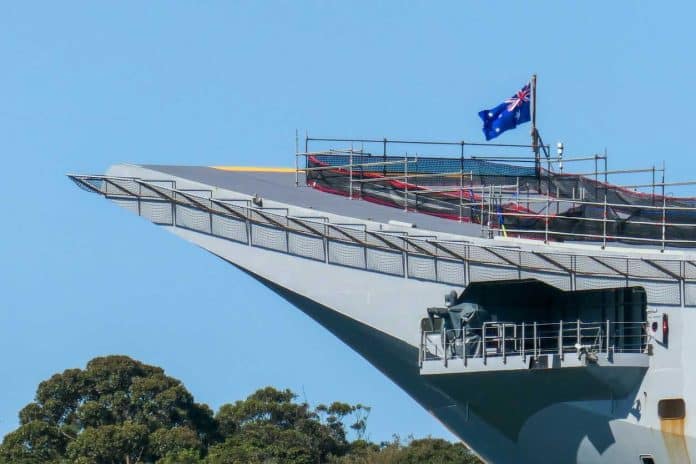 Not so long ago, Australia was known for its booming economy and balanced foreign policy. Today its economy is stagnating, while the US Big Defense casts a dark shadow over its foreign policy – as evidenced by nuclear escalation.

In late October, Australia dropped its opposition to a landmark treaty banning nuclear weapons in a vote at the United Nations. The shift in its voting position to “abstain” after five years of “no” is significant.

The Treaty on the Prohibition of Nuclear Weapons (TPNW) prohibits the development, testing, stockpiling, use and threats regarding the use of nuclear weapons.

The change comes as the U.S. is planning to deploy nuclear-capable B-52 bombers to the country, where the weapons will be positioned close enough to strike China.

Defending the vote, foreign affairs minister Penny Wong stresses Australia has “a long and proud commitment to the global non-proliferation and disarmament regime” and the government supports the treaty’s “ambition of a world without nuclear weapons.”

The Australian labor government is now facing extraordinary pressure due to its stand. Recently, the U.S. warned Australia against joining the TPNW. As the U.S. embassy in Canberra put it, the treaty “would not allow for U.S. extended deterrence relationships.” It argues that the agreement could hamper defense arrangements between the U.S. and its allies.

Beatrice Fihn, executive director of the International Campaign to Abolish Nuclear Weapons (ICAN), the Nobel-awarded organization behind the TPNW, called the U.S. embassy’s comments “irresponsible” adding, “Using nuclear weapons is unacceptable, for Russia, for North Korea and for the U.S., UK and all other states in the world. There are no ‘responsible’ nuclear armed states. These are weapons of mass destruction and Australia should sign the #TPNW!” (Figure 1). 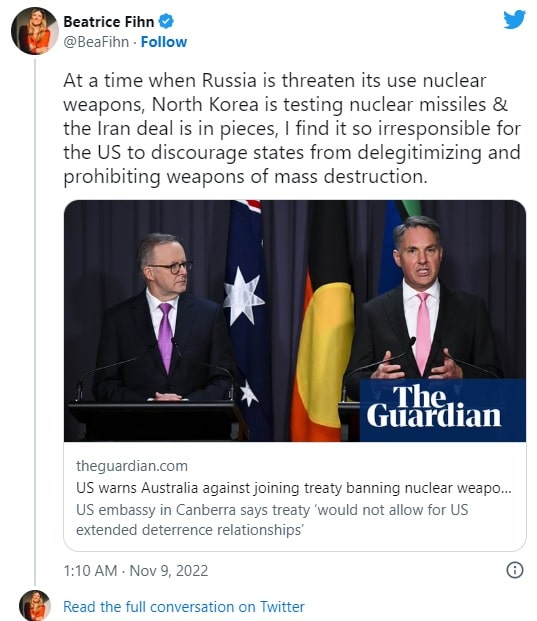 Only 6% of Australians support nuclear arms

Australian Prime Minister Anthony Albanese believes that “nuclear weapons are the most destructive, inhumane and indiscriminate weapons ever created.” That was the basis for his 2018 motion to commit the Labor Party to supporting the TPNW.

The Labor’s 2021 platform included a commitment to signing and ratifying the treaty “after taking account” of factors including the development of “an effective verification and enforcement architecture.”

Recently, New Zealand said it was “pleased to observe a positive shift” in Australia’s position in the UN vote and “would, of course, welcome any new ratifications as an important step to achieving a nuclear weapon-free world.”

The treaty now has 91 signatories, 68 of which have formally ratified it, and it entered into force last year.

An overwhelming majority of Australians backs the government’s position. According to an Ipsos poll taken in March, 76% of people support the country signing and ratifying the treaty, while only 6% are opposed.

The real gap is between the profit objectives of the U.S. Big Defense and the peaceful aspirations of Australian people.

The pact will also escalate regional arms races and nuclear proliferation, which is strongly opposed by China, and it casts a dark shadow over the aims of the Southeast Asian Nuclear-Weapon-Free Zone Treaty (SEANWFZ, 1995). Indeed, it will effectively contribute to the erosion of the long-anticipated Asian Century by militarizing the region and dividing its dynamic economic engines.

If the stakes are so high, why this interest in the weapons of mass destruction? Here’s the simple answer: follow the money.

The Pentagon and the Department of Energy have been ramping up a three-decades-long plan to build a new generation of nuclear-armed bombers, submarines and missiles, coupled with new warheads. The price tag for operating current weapons and building new ones could reach a confounding $2 trillion. The cost of nuclear weapons deployment, development, and procurement could soar to $634 billion.

For the fiscal year 2022, the Pentagon budget proposal includes billions of dollars for new nuclear delivery vehicles, with a handful of contractors as the primary beneficiaries, including General Dynamics, Northrop Grumman, Lockheed Martin and Raytheon, along with Huntington Ingalls, Honeywell, and Bechtel. Australia’s privilege is to pay the bill.

In June, Australia announced a $585 million settlement with France’s Naval Group as compensation for scuppering a submarine contract with Paris. According to current estimates, Australia’s nuclear submarines could cost up to $171 billion.

Australia is today among the four largest importers of arms, globally. In 2021, it spent over $1.2 billion on the import of weaponry, according to SIPRI, making the formerly-peaceful nation the world’s No.1 importer of deadly capability. Since two-thirds of Australia’s military imports come from the U.S., America’s Big Defense is the great beneficiary of the trend (Figure 3).

According to recent disclosures by The Washington Post, the Pentagon’s high-level influence operations in Australia have escalated since the mid-2010s. The results are stunning. Between 2012-16 and 2017-21, Australia’s share of global arms exports doubled. In the period, that translates to an increase of a stunning 92%; more than in any other arms exporter worldwide, except for South Korea and India.

In Canberra, some conservatives see these trends as positive. They want to turn Australia into a world-class military-industrial complex – a more advanced version of the “arms depots” in Taiwan and Ukraine.

In the past, U.S.-Australian bilateral interests converged in security matters, but diverged in trade and investment. However, a decade ago, I argued in a Reuters analysis that Australia was “no longer immune to the stagnation in the West.” Worse, the past decade has witnessed a drastic shift toward hawkish geopolitics at the expense of welfare.

In the 2000s, a more open stance ensured strong growth on the back of China’s industrialization. But in the past decade, the return to geopolitics and neoliberalism has derailed progress.

As economic growth is gradually stagnating, military expenditures have increased sixfold in the past two decades. Worse, government debt has increased tenfold in just one decade. As a net effect, income inequality has progressively increased since the 1980s, particularly in the past decade, as the old egalitarian ideals have been brushed away, polarization and divides of class, race and gender have deepened. (Figure 4)

In January, Australia agreed to a $3.5 billion deal with the U.S. to acquire more than 120 tanks and other armored vehicles to upgrade its military fleet. In November, Australian media reported that up to six U.S. nuclear-capable B-52s would be sent to the Royal Australian Air Force’s Tindal base in northern Australia. The move led China to accuse the U.S. of stoking nuclear tensions in the region.

The Albanese government faces the prospect of a blowout in defense spending which reflects annual growth of 7.4% in nominal terms and 3.8% in real terms. While the economy faces prospects of stagnation and the population is aging, defense spending is increasing two to three times faster than economic growth. That’s untenable.

The Biden administration has made Australia a central part of its defense strategy. It needs a military-industrial complex in the country which is being forced into the kind of nuclear escalation that two of three Australians oppose.

These strategic objectives are very much in the interest of U.S. Big Defense. But they are not in Australia’s national interest.

The original commentary was published by China-US Focus on Nov. 15, 2022