Presidents Xi Jinping of China and Joe Biden of the United States have held their first face-to-face meeting since 2017. The pair met on the sidelines of the G20 summit in Bali, Indonesia, to discuss their joint obligation for charting a new course towards a better a bilateral relationship.

Biden emphasised their shared responsibility to “prevent competition from becoming anything ever near conflict”. Xi, in turn, acknowledged that “the two presidents need to play the leadership role, set the right course for the China-US relationship and put it on an upward trajectory”.

This, of course, is easier said than done given the key areas of bilateral disagreement: Taiwan, North Korea and Ukraine, to name but the top three. The two leaders also face a raft of pressing global challenges in the climate, economic, food and energy crises. And while the tone of the their opening remarks was amicable enough, it cannot disguise the fact that US-China relations have been at their lowest point in decades.

Taiwan is a particularly sensitive issue. The US remains committed to its one-China policy of not having diplomatic relations with Taiwan, but has provocatively strengthened its unofficial relationship. From Beijing’s perspective, supporting the status quo is one thing. But it’s quite another when the speaker of the US House of Representatives, Nancy Pelosi, makes a highly publicised visit to Taipei in which she reiterates US security guarantees for Taiwan.

Washington, in turn, takes a dim view of Xi’s statement in his report to the 20th Congress of the Chinese Communist Party last month that: “Resolving the Taiwan question and realising China’s complete reunification is, for the Party, a historic mission and an unshakeable commitment.”

According to China’s Xinhua news agency, Xi reiterated this point in his meeting with Biden, adding that: “The Taiwan question is at the very core of China’s core interests, the bedrock of the political foundation of China-US relations, and the first red line that must not be crossed in China-US relations.” Biden, in response, assured Xi that the one-China policy had not changed and that the US continued to oppose “any unilateral changes to the status quo by either side”.

North Korea is similarly contentious for Beijing and Washington, and arguably more prone to unwanted escalation. North Korea’s reclusive regime is hard to predict and even harder to control, including for its Chinese allies. A series of missile tests since late September led to speculation that Pyongyang could also test nuclear warheads themselves, not just the missiles capable of carrying them.

This fear has not materialised so far. But it triggered the largest-ever joint US-South Korean air force drills, including supersonic bombers. This prompted more North Korean missile tests. It also led to intensified defence cooperation between the US, South Korea and Japan.

In the context of the existing three-way strategic defence pact between Australia, the UK and US (Aukus) and the Quadrilateral Security Dialogue of the US, Australia, India and Japan (the Quad), it is easy to see how an increase in US military presence and activities in China’s neighbourhood at a time of already tense bilateral relations with the US is perceived as more than just a potential threat in Beijing. This is the case even if it is related to North Korea rather than directly to China.

While Taiwan and North Korea have been on the US-China agenda for some time, Ukraine is a more recent problem on which the two sides do not see eye-to-eye either over whose fault the war is or how to end it. On the one hand, China – and Xi personally – has supported Mosocow’s narrative of a western threat to Russia. But China has also repeatedly emphasised the need to respect countries’ sovereignty and territorial integrity and has spoken out against irresponsible threats to use nuclear weapons. 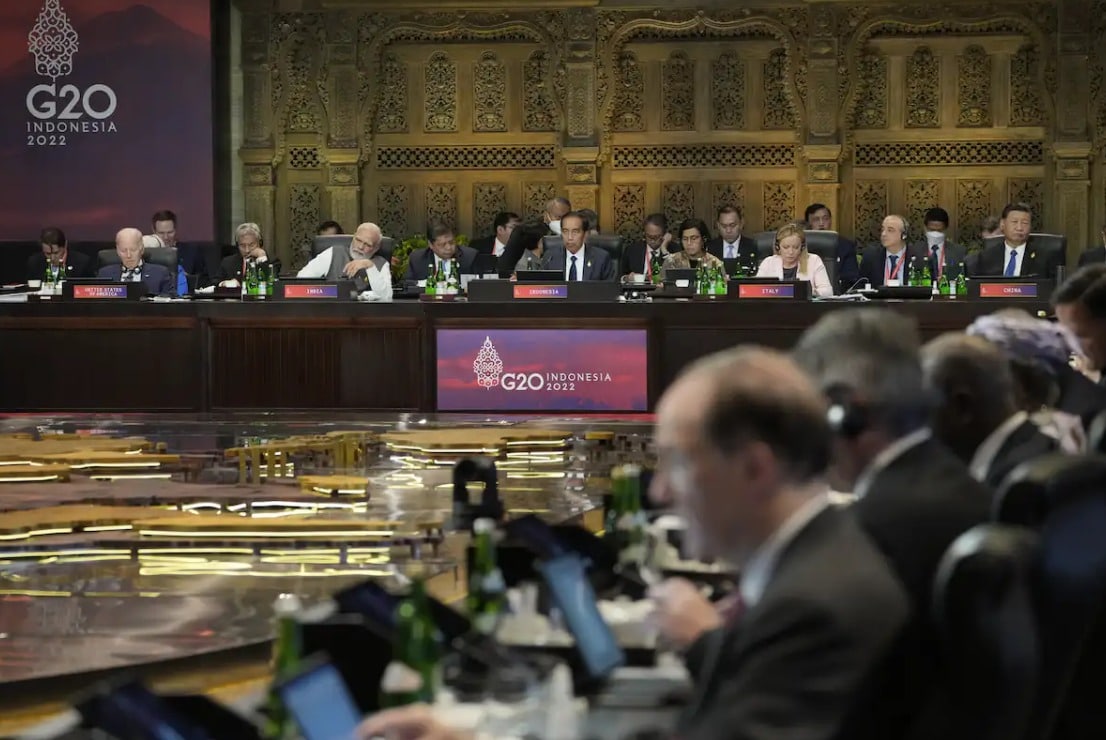 According to the US account of the meeting, Biden and Xi “reiterated their agreement that a nuclear war should never be fought and can never be won and underscored their opposition to the use or threat of use of nuclear weapons in Ukraine”. Chinese state media additionally reported that: “China supports and looks forward to a resumption of peace talks between Russia and Ukraine, and hopes that the United States, Nato and the European Union will conduct comprehensive dialogues with Russia.”

This is a far from unequivocal condemnation of the Russian war of aggression against Ukraine. Nor is it a sign that China will abandon a position that it considers as “balanced”. This much was obvious when China voted against a subsequent draft resolution at the UN general assembly that had proposed to impose reparations on Russia “for damage, loss or injury, and arising from the internationally wrongful acts of the Russian Federation in or against Ukraine”.

But what it does demonstrate is that, under Vladimir Putin – and especially since the invasion of Ukraine – Russia has lost more of its former great-power status. It is now a problem for the only two remaining major powers to manage rather than to accommodate.

A road to détente?

There are three key takeaways from the Biden-Xi meeting. First, neither side has an interest in the further escalation of tensions in their bilateral relations. On the contrary, the statements by both leaders before and after their meeting point towards efforts to improve relations.

Second, there are areas where both countries will be able to work together. The resumption of the US-China climate security dialogue is a clear sign of this. Planned follow-up talks during a visit of US secretary of state, Antony Blinken, to China next year indicate that both sides see scope for further cooperation elsewhere.

Third, relations between the US and China may be heading towards more stability and cooperation, but this will not end competition between them. While Xi outwardly opposes the “democracy versus authoritarianism” narrative, it is equally clear from the Biden-Xi meeting that the US-China relationship will remain the defining feature of the international system.

This article was originally published in The Conversation on 15 November 2022. It can be accessed here: https://theconversation.com/us-china-talks-biden-and-xi-attempt-to-play-down-superpower-tensions-but-ukraine-and-taiwan-loom-large-194471

Stefan Wolff – The author of eighteen books and over fifty journal articles and book chapters, Stefan Wolff is Professor of International Security at the University of Birmingham, England, UK. He is also A political scientist by background, he specialises in the management of contemporary security challenges, especially in the prevention and settlement of ethnic conflicts and civil wars, and in post-conflict reconstruction, peace-building and state-building in deeply divided and war-torn societies. He has extensive expertise in Northern Ireland, the Balkans, Central and Eastern Europe, and the former Soviet Union, and has also worked on a wide range of other conflicts elsewhere, including the Middle East, Africa, and Central, South and Southeast Asia. Bridging the divide between academia and policy-making, he has been, and is, involved in various phases of conflict settlement processes, including in Iraq, Sudan, Moldova, Sri Lanka, the Philippines, and Kosovo.