European Council president Charles Michel heads to Beijing on December 1, the latest in a procession of western leaders to seek an audience with Xi Jinping, in a year when the Chinese president has cemented his position as the country’s most powerful leader since Mao Zedong.

Xi met more than 20 heads of government earlier in 2022 at the Beijing Olympics, but most of these did not represent democracies. The visit of Michel, a senior European politician, will focus attention on western attitudes to China’s increasingly assertive geopolitical stance. And it is likely to highlight deep divisions in the west over how to deal with Beijing.

The first divide is transatlantic. It’s true that US president Joe Biden took a more conciliatory tone at his recent meeting with Xi at the G20 summit in Indonesia. But Washington is generally taking a much more hawkish approach to China than the major EU members, especially France and Germany.

The most recent US national security strategy, released at the end of October, characterises China as “the only competitor with both the intent to reshape the international order and, increasingly, the economic, diplomatic, military, and technological power to do it”. It makes “maintaining an enduring competitive edge over the PRC” a US priority.

By contrast, Josep Borrell, the EU’s high representative for foreign affairs and security policy, speaking at the European Parliament on November 22, put the EU’s emphasis on cooperation with China. Noting differences with China – including on democracy, human rights, and multilateralism – Borrell also said: “China is becoming increasingly assertive and developing an increasingly vigorous competition.” But, crucially, he closed his speech by saying: “The United States are our most important ally but, in some cases, we will not be in the same position or on the same approach to towards China.”

While the US has started to increase pressure on EU allies to align more closely with its hard line on China, Europeans have been pushing back. There have been reports about Dutch concerns over new US export restrictions to China. The French president, Emmanuel Macron, who is to meet Biden in Washington on December 1, is expected to raise EU-China relations in their discussions.

And perhaps most importantly, during German chancellor Olaf Scholz’s recent visit to China, the emphasis was very much more on economic cooperation than on political competition.

Yet it would be too simplistic to assume that there is a clear dividing line that runs through the Atlantic. Within the EU, there are clear differences over how to approach China, and they are difficult to paper over. For example, the EU-China Comprehensive Agreement on Investment, signed to much fanfare and criticism in December 2020, remains to be ratified. 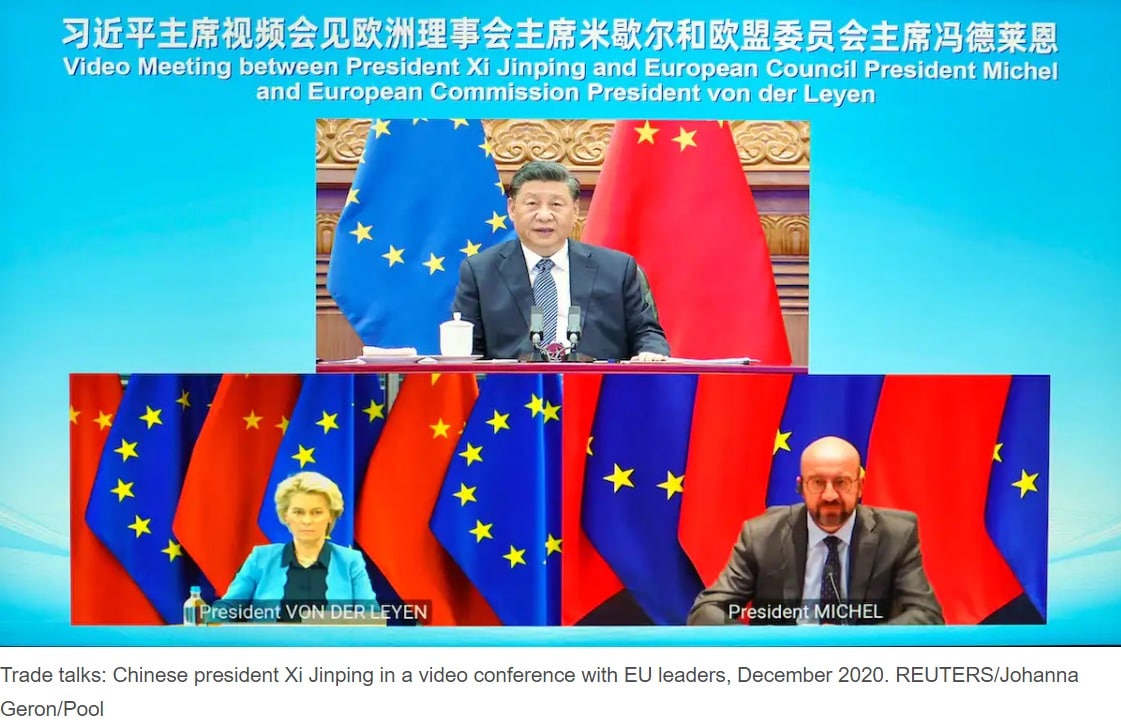 Lithuania, one of the smallest EU members, allowed Taiwan to open a trade office in the Lithuanian capital, Vilnius, using the name Taiwan rather than the more commonly used name of its capital, Taipei. This caused a major row with China who considered this as a departure from the One China policy. It also put the EU in a difficult spot between standing up for one of its member states and maintaining its long-professed offical policy that recognises Taiwan as part of China.

Scholz’s trip to Beijing was also not without controversy. Several leaders reportedly raised concerns over the possibility of separate deals with China that could undermine EU unity. Moreover, a French proposal of a joint Macron-Scholz trip to China to signal EU unity was apparently rejected by Scholz who favoured a German-only political and business delegation.

A third dividing line exists within countries where political and business leaders are often at odds among themselves and with each other over which approach to take to China.

Take the example of the UK. In a speech at the Lord Mayor’s Banquet in London – a traditional venue for UK leaders to lay out their foreign policy priorities – the UK’s current prime minister, Rishi Sunak, advocated an approach of “robust pragmatism” towards China. This seeks to strike a balance between hardliners in his own party who seek a tougher approach to China and the interests of many businesses trading with China.

But a recent decision by the UK government to ban the use of Chinese cameras in surveillance systems indicates that, for now, British hawks are winning in this debate.

Similar debates are happening in Germany. The government is debating new rules on private sector links with China that aim to incentivise German companies to seek markets elsewhere and decrease their dependency on China. In response, the chief executive of German car manufacturer Mercedes-Benz, Ola Källenius, said it was “absolutely inconceivable” to back out of the Chinese market.

This stance is likely to be shared by Volkswagen and BMW, as well as chemicals giant BASF, who together with Mercedes accounted for more than one-third of all European foreign direct investment in China between 2018 and 2021.

The German coalition government is also far from united on China. The Green party, which holds both the economics and foreign affairs briefs in Chancellor Scholz’s cabinet, in particular is far more reluctant to give China the benefit of the doubt.

Buoyed by US pressure and intelligence reports on China’s potential for subversion, the Greens have won some key arguments of late. This has led to the German government banning Chinese investment in two chip makers and reducing the Chinese stake in the port of Hamburg.

Against this background, it is unlikely that Michel’s trip will lead to any fundamental change in EU-China relations. The lowest common denominator between the two economic giants remains stability in their trade relations.

This is as important for China as it is for the EU, neither of who can afford further shocks to volatile domestic and global economies. Nor can they give up on trying to work out approaches to other critical challenges such as climate change and the war in Ukraine and its implications for global food and energy prices.

The current primacy of economic concerns, however, cannot forever disguise the fundamental political differences between the EU and China. Brussels will eventually need to face up to them, no matter how much it might prefer a business-as-usual relationship with Beijing.

This article was originally published in The Conversation on 30 November 2022. It can be accessed here: https://www.weforum.org/agenda/2021/01/china-digital-agriculture-global-food-security/

Stefan Wolff – The author of eighteen books and over fifty journal articles and book chapters, Stefan Wolff is Professor of International Security at the University of Birmingham, England, UK. He is also A political scientist by background, he specialises in the management of contemporary security challenges, especially in the prevention and settlement of ethnic conflicts and civil wars, and in post-conflict reconstruction, peace-building and state-building in deeply divided and war-torn societies. He has extensive expertise in Northern Ireland, the Balkans, Central and Eastern Europe, and the former Soviet Union, and has also worked on a wide range of other conflicts elsewhere, including the Middle East, Africa, and Central, South and Southeast Asia. Bridging the divide between academia and policy-making, he has been, and is, involved in various phases of conflict settlement processes, including in Iraq, Sudan, Moldova, Sri Lanka, the Philippines, and Kosovo.