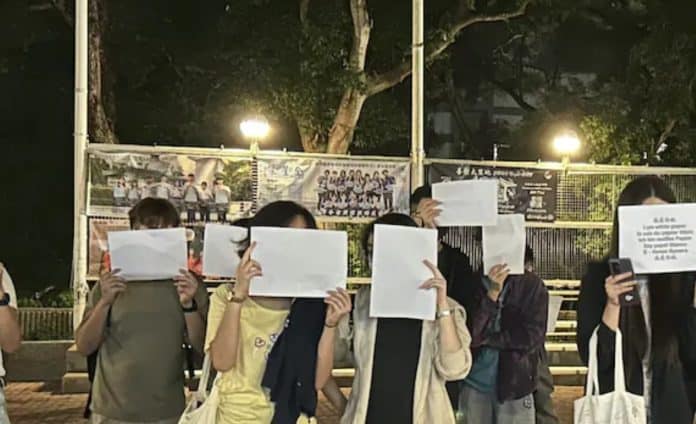 While a lot of attention has been given to the unprecedented protests in China about the “dynamic zero COVID” policy, not much has been written about the wider political context, and particularly the young people leading the protests.

These young protesters have proven to be agile, and appear to be always a couple of steps ahead of the authorities, who are desperate to keep a lid on any uprising. They particularly do not want the wider world to know the extent of the protests.

There have been reports that at the heart of the protests is a call for greater political freedom, and these young people are using the zero-COVID policy as the platform to seek more openness. This should not come as a surprise to anyone keeping an eye on China since the pandemic measures were first introduced in 2020.

President Xi Jinping has made zero-COVID one of his signature programs, along with the “China Dream”, and used it to get a precedent-breaking third term at the five-yearly Communist Party congress in October. All opposition was crushed, and nothing was allowed to derail his ascendency.

Now that Xi has cemented his status as the most powerful Chinese leader since Mao, why wouldn’t he relax the zero-COVID policy in line with the rest of the world?

The easy answer would be that he would lose too much “face” if he were to back down. I would suggest Xi is actually more worried that a relaxed policy will lead to more deaths among the elderly.

Close to 20% of China’s population is over 60, and the percentage is higher in rural areas where health services are poor. Most of the COVID deaths this year are associated with old people. The vaccination rates among the old, especially those in the rural areas, are significantly lower than the overall figure.

Latest figures released by the government show that in Shanghai, only 62% of those over 60 are vaccinated, with 38% boosted. But in the most vulnerable over-80 age group, this number fell to just 15% fully vaccinated. You can imagine what the figures would be like for those living in the rural interiors of China.

Xi is simply unwilling to pay the political price for large numbers of elderly Chinese dying. His hold on power may even be affected if there is a sudden spike in deaths due to COVID.

One should not underestimate the political consequences: unlike in the West, many elderly Chinese in rural areas live with their children. Even though large numbers of Chinese clearly want to restrictions lifted, he will be blamed for the opening up leading to more deaths.

So, where does that leave us? On the one hand, it’s clear the young people want more freedom and restrictions lifted, including more political freedom. The zero-COVID policy has turned out to be the most effective platform to get their message out. There is every chance that if the authorities cannot slow down or crush the protests, the next step will be nationwide protests where other dissatisfied groups will join in.

At this stage, Xi will probably have to deploy the full security apparatus, which will likely result in high numbers of protester arrests. China has perfected the art of putting an entire segment of the population under detention for a period to cool the political temperature – the suppression of the Uyghurs is just one example. 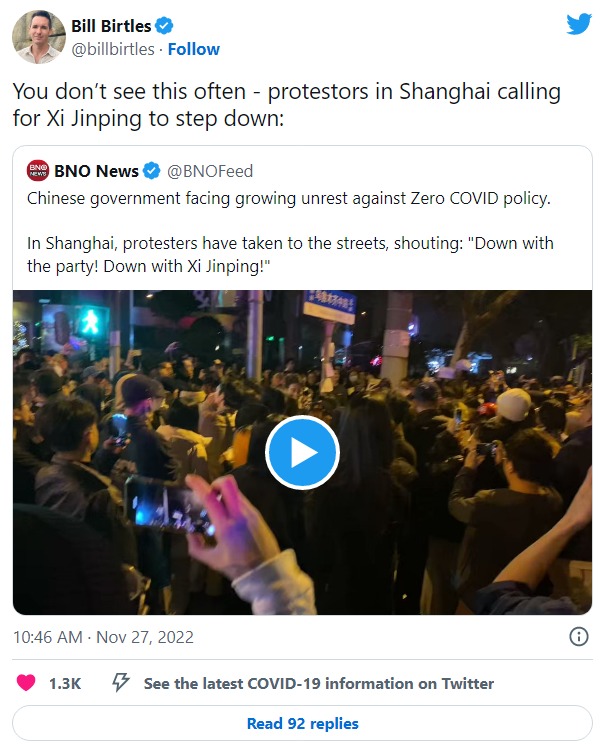 One cannot help but see parallels between what is happening in China and the protest movement in Iran.

In Iran, the young people mobilised against the regime over the death of Mahsa Amini, a 22-year-old Iranian of Kurdish origin. She died in detention three days after she was arrested for allegedly breaching the Islamic dress code for women. The authorities deny she was mistreated, but she died while in custody.

The nationwide protests were led by young people and have now reached a stage where the entire regime is at risk.

At the heart of the protest is politics – Amini’s death was the trigger for young women in particular to take to the streets and call for political freedom from theocracy. It has been more than two months since the protests began, and there is no sign they are slowing down.

Young people in China, like those in Iran, want political freedoms and reforms, and want their voices to be heard and acted on. They were looking for a trigger point and found it in the COVID restrictions.

Where to from here?

It would be foolish to guess what will happen next in China, or even Iran. The inner workings of both regimes are opaque to the outside world. In China, Xi’s formidable political skills may be such that he will be able to find a way out while remaining in power.

The danger is that the longer the protests continue, the more dangerous they become. The security forces in China are brutal, and their actions against the protesters could easily get out control.

The saddest thing about the protests in Iran and China is the inability of the outside world to do anything. In both cases, the regime can completely ignore what the rest of the world thinks. In the meantime, the world can only watch, with horror, and wait to see what happens next.

This article was originally published in The Conversation on 29 November 2022. It can be accessed here: https://theconversation.com/yes-the-chinese-protests-are-about-politics-and-freedom-but-they-are-also-about-what-covid-might-do-if-it-is-let-loose-now-195553

James Chin – Professor of Asian Studies, University of Tasmania. He was the inaugural Director of the Asia Institute, University of Tasmania. He is also Senior Fellow, Jeffrey Cheah Institute on Southeast Asia, Kuala Lumpur. He is an expert on the governance issues in Southeast Asia, especially Malaysia and Singapore. He also works on island states in the South Pacific. His views are regularly sought by major news agencies around the world, including The New York Times, The Financial Times, BBC World TV, CNBC and Bloomberg.

How To Make Your Own Jewelry