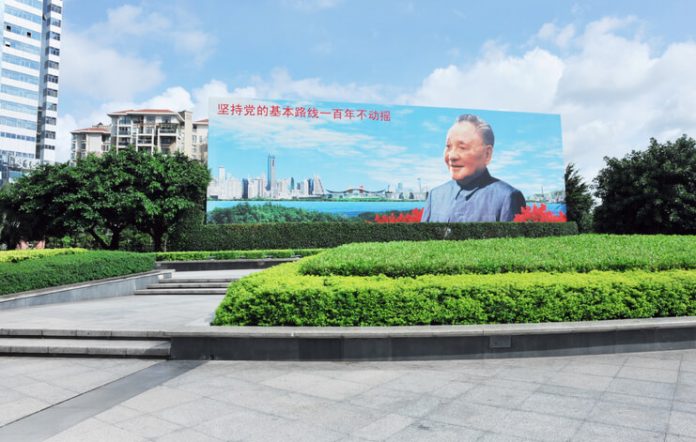 This piece is part of a new series in collaboration with the ABC’s Saturday Extra program. Each week, the show will have a “who am I” quiz for listeners about influential figures who helped shape the 20th century, and we will publish profiles for each one. You can read the other pieces in the series here.

Deng Xiaoping could lay claim to being the most significant political leader of the latter part of the 20th century, and one whose legacy continues to expand.

His record is remarkable.

It is at least arguable, if not certain, that had it not been for Deng’s force of personality and his willingness to take political risks, China would not have embarked in 1978 on an accelerated process of economic development.

If the Chinese economy had not achieved staggering rates of economic growth of 10% annually on average in the decades following Deng’s political re-emergence in 1977, the world would be a very different place.

In other words, one man of diminutive size — he was barely 1.5 metres tall — has had an outsize impact on world economic history.

Born to a landowning family in Sichuan province in 1904, Deng gradually progressed through the Chinese Communist hierarchy as a committed Marxist-Leninist and a tough field commander and political commissar.

Mao Zedong may have prevailed in a bloody revolutionary war against the Nationalists, but it was his one-time protégé who propelled a country containing one-quarter of the world’s population into a new era.

History will be a lot kinder to Deng than it will be to Mao, who brought enormous grief to his country in highly destructive political campaigns, culminating in the Cultural Revolution of 1966–76.

Deng himself was a victim of these campaigns. He was banished from the Chinese leadership early in the Cultural Revolution until he was rehabilitated in 1973 by his patron, then-Premier Zhou Enlai. He was purged a second time after Zhou died in 1976.

Mao’s death not long after Zhou’s and the arrest of the Maoist acolytes known as the “Gang of Four” enabled Deng to assert himself in a series of stunning political manoeuvres that ruled a line under years of revolutionary upheaval.

To get rich is glorious

Deng was, without question, an authoritarian figure who believed in the absolute power of the Chinese Communist Party. His legacy will be forever stained by his authorisation of force against the pro-democracy demonstrators on Tiananmen Square in 1989, in which hundreds are believed to have died, and many more were incarcerated.

On 13th May, radical students marched to Tiananmen and began a hunger strike. The next day, Soviet leader Gorbachev arrived. Deng Xiaoping was humiliated. [13/20] pic.twitter.com/LuWp5wwD1J

Without excusing the excesses of the Tiananmen crackdown, however, the totality of Deng’s contribution to his country’s transition from economic laggard to modern superpower cannot be overstated.

Deng’s extraordinary achievements are too many to list here, but three dates stand out in his efforts to set his country on a path, as he put it, of “reform and opening”.

The fact he used both words — reform and opening — summed up his approach to wrenching his country from its revolutionary past to chart another course.

1978: Deng’s authority manifested itself at the Third Plenum of the 11th Central Committee of the Chinese Communist Party.

In modern Chinese history, this event is seen as the starting point for the massive shifts that would loosen up China’s economy and dismantle what was known as the “bamboo curtain” that had shielded it from the outside world.

1980: In a speech whose importance is sometimes lost in historical accounts, Deng laid down the “Great Tasks” facing China in the last two decades of the 20th century and beyond.

Among those tasks was the quadrupling of gross national product by 2000, an aspiration that was initially scoffed at. Under the Deng-initiated reforms, which included the de-collectivisation of agriculture and the unleashing of an entrepreneurial business class, China achieved that goal in a canter.

1992: Deng, then 90 and in bad health, embarked on what was described as a nanxun, or southern inspection tour, in which he re-energised the reform process after it had fallen into the doldrums following Tiananmen.

The fallout from the massacre included the purging of reformist leader Zhao Ziyang, who was general secretary of the Communist Party and a former premier. A ruthless Deng elected not to protect his protégé.

Historians may well come to regard Deng’s nanxun as not simply his last hurrah, but his most enduring contribution to China’s surging power and influence.

In all of this, it is important to remember that in 1978, China’s economy was about the same size as Italy’s. In 2021, China’s economy on a nominal GDP basis is the world’s second largest behind the United States, and should surpass the US in the next few years. At the same time, China has lifted 800 million people out of poverty. Never before in human history have we seen anything quite like this.

Of course, Deng did not achieve all of this by himself, but he was prepared to embrace what Mao had sought to suppress in a single-minded desire to maintain control over party and country. This was the extraordinary energy and enterprise of the Chinese people.

Deng’s various slogans, such as “to get rich is glorious” captured the moment, and indeed helped to unleash the full potential of the Chinese people.

Biding its time no more

None of this is to suggest Deng’s legacy will be untroubled, or that China’s surging power and influence will continue to build without impediments.

The country’s continuing economic transformation resembles a high-wire act as China’s leadership seeks to maintain its footing in a world in flux as American power recedes. China’s economy is far from having reached a plateau in which consumer demand provides a buffer against ups and downs in its export markets. These are challenging times for the post-Deng leadership in Beijing.

Deng himself may well have looked askance on the emergence of a personality cult around paramount leader Xi Jinping. In his “Great Tasks” speech of 1980, Deng had warned against this very development.

This was born of his own experiences at the hands of a tyrannical Mao. In that speech, Deng had emphasised collective leadership in the knowledge that untrammelled power corrupts.

What has certainly been left astern is Deng’s advice that China should “keep a low profile” or “bide its time” – tao guang yang hui — as its power and influence grows. The use of this phrase has been variously interpreted over the years as either a warning from Deng that China should avoid throwing its weight around or a ruse in which Beijing stealthily accumulates power without making it too obvious.

Under Xi’s brand of Chinese nationalism, the tao guang yang hui approach has been discarded. This may have been inevitable as China becomes more powerful, but it is at least debatable whether a shrewd Deng Xiaoping would have countenanced an approach that risked antagonising much of the rest of the world.

Tony Walker is a vice chancellor’s fellow at La Trobe University. He is a columnist for The Age and The Sydney Morning Herald. He is a dual Walkley Award winner for commentary and recipient of the Paul Lyneham Award for Excellence in Press Gallery Journalism. He is a former foreign correspondent for Fairfax and the Financial Times in China, the Middle East and North America. Publications include Arafat: The Biography and The Peter Thomson Five.