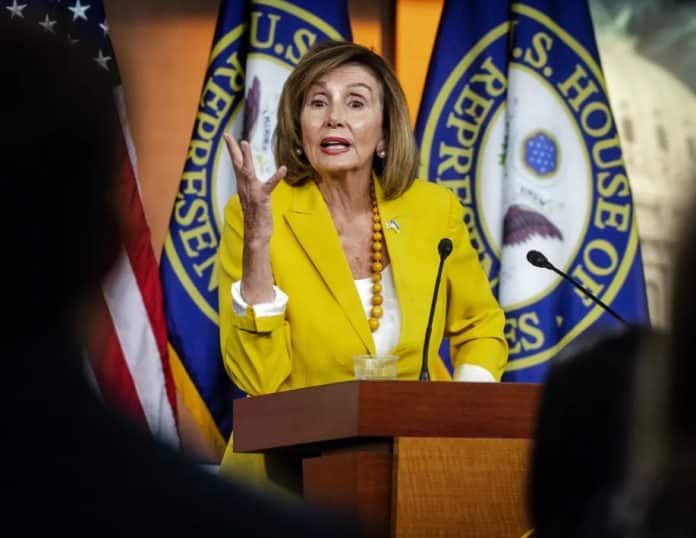 U.S. House Speaker Nancy Pelosi hasn’t confirmed when – or even if – she is to visit Taiwan. Yet such is the sensitivity over the island’s status that reports of her possible trip have resulted in a warning by China of “serious consequences” and a suggestion by President Joe Biden that the visit was “not a good idea.” Amid the rhetoric and heightened tensions, Taiwan is conducting military drills.

The comments follow a report by the Financial Times that Pelosi planned to take a delegation to Taiwan in August. The outlet based its report on six people “familiar with the situation”; Pelosi’s spokesperson has said she could neither confirm not deny the reported trip.

As someone who has long studied the U.S.‘s delicate diplomatic dance over Taiwan, I understand why this reported trip has sparked reaction in both Washington and Beijing, given the current tensions in the region. It also marks the continuation of a process that has seen growing U.S. political engagement with Taiwan – much to China’s annoyance.

The controversy over reports of Pelosi’s potential visit stems from the “one China” policy – the diplomatic stance under which the U.S. recognizes China and acknowledges Beijing’s position that Taiwan is part of China. The policy has governed U.S. relations with Taiwan for the last 40-plus years.

In 1979, the U.S. abandoned its previous policy of recognizing the government of Taiwan as that of all of China, instead shifting recognition to the government on the mainland.

As part of this change, the U.S. cut off formal diplomatic ties with Taiwan, with the U.S. embassy in Taiwan replaced by a nongovernmental entity called the American Institute in Taiwan.

The institute was a de facto embassy – though until 2002, Americans assigned to the institute would have to resign from U.S. State Department to go there, only to be rehired once their term was over. And contact between the two governments was technically unofficial.

As the government in Taiwan pursued democracy – starting from the lifting of martial law in 1987 through the first fully democratic elections in 1996 – it shifted away from the assumption once held by governments in both China and Taiwan of eventual reunification with the mainland. The government in China, however, has never abandoned the idea of “one China” and rejects the legitimacy of Taiwanese self-government. That has made direct contact between Taiwan and U.S. representatives contentious to Chinese officials.

Indeed, in 1995, when Lee Teng-hui, Taiwan’s first democratically elected president, touched down in Hawaii en route to Central America, he didn’t even set foot on the tarmac. The U.S. State Department had already warned that the president would be refused an entry visa to the U.S., but had allowed for a brief, low-level reception in the airport lounge during refueling. Apparently feeling snubbed, Lee refused to leave the airplane.

Two years after this incident came a visit to Taiwan by then-House Speaker Newt Gingrich.

Similarly to the possible Pelosi visit, the one by Gingrich annoyed Beijing. But it was easier for the White House to distance itself from Gingrich – he was a Republican politician visiting Taiwan in his own capacity, and clearly not on behalf of then-President Bill Clinton.

Pelosi’s possible visit could be different, because she is a member of the same party as President Joe Biden, and China may assume she has Biden’s blessing, despite his comments to the contrary.

Asked on July 20 about his views on the potential Pelosi trip, Biden responded that the “military thinks it’s not a good idea right now.”

The comment echoes the White House’s earlier handling of a comment by Biden in which he suggested in May 2022 that the U.S. would intervene “militarily” should China invade Taiwan. Officials in the Biden administration rolled back the comment, which would have broken a long-standing policy of ambiguity over what the U.S. would do if China tried to take Taiwan by force.

Similarly with Pelosi, the White House is distancing itself from a position that suggests a shift in U.S.-Taiwanese relations following a period in which the U.S. had already been trying to rethink how it interacts with Taiwan.

In 2018, Congress passed the bipartisan Taiwan Travel Act. This departed from previous policy in that it allowed bilateral official visits between the U.S. and Taiwan, although they are still considered to be subdiplomatic.

In the wake of that act, Donald Trump’s Health and Human Services secretary, Alex Azar, became the highest-ranking U.S. official to visit Taiwan since 1979. Then in 2020, Keith Krach, undersecretary for economic growth, energy and the environment, visited Taiwan.

And in April 2022, a U.S. congressional delegation visited Taiwan. Pelosi herself was reportedly due to visit the island that same month, but canceled after testing positive for COVID-19.

Each of these visits has provoked angry statements from Beijing.

A high-profile visit – even one without the public backing of the White House – would signal support to the island at a time when the invasion of Ukraine by Russia has raised questions over the international community’s commitment to protect smaller states from more powerful neighbors.

Meanwhile, the erosion of democracy in Hong Kong has undermined China’s commitment to the idea of “one nation, two systems.” The principle, which allowed Hong Kong to maintain its economic, political and social systems while returning to the mainland after the end of British rule, had been cited as a model for reunification with Taiwan. The Chinese Communist Party also plans to hold its 20th congress in the coming months, making the timing sensitive for a Taiwan visit from a high-profile U.S. political figure such as Pelosi.

This article was originally published in The Conversation on 26 July 2022. It can be accessed here: https://www.weforum.org/agenda/2021/01/china-digital-agriculture-global-food-security/

Meredith Oyen – teaches courses on U.S. History and U.S. Diplomatic History. She specializes in the history of Sino-American relations, focusing her research on the role of migrants, transnational networks, and nongovernmental organizations in bilateral relations in the twentieth century. Before coming to UMBC, she taught for two years at the Johns Hopkins University-Nanjing University Center for Chinese and American Studies. Her book, The Diplomacy of Migration: Transnational Lives and the Making of U.S.-Chinese Relations in the Cold War, was published by Cornell University Press in 2015. She has published articles in Diplomatic History, Journal of Cold War Studies, and Modern Asian Studies. Oyen is currently at work on a project involving Jewish refugees in WWII Shanghai. She served as the first Faculty Veterans Fellow at UMBC in 2015-2016. She participated in an NEH summer institute on Veterans Studies in summer 2016. She won a 2017 Hrabowski Innovation grant for her project on creating a better environment for UMBC’s Student Veterans. She also won 2017 CAHSS Summer Faculty Research Fellowship (SFRF) from the Dresher Center at UMBC for her new project: Shanghai Survivors: World War Two’s Displaced Persons in Asia and the International Politics of Refugee Resettlement. Oyen is on leave with a Holocaust Museum fellowship in 2016-2017.

Why China Has the Right to ‘Build Sovereignty’ in the South...

The Chinese Digital Consumer in a Multichannel World

The China Model: a Civilizational-State Perspective

The Impact of China’s Growing Influence in Africa