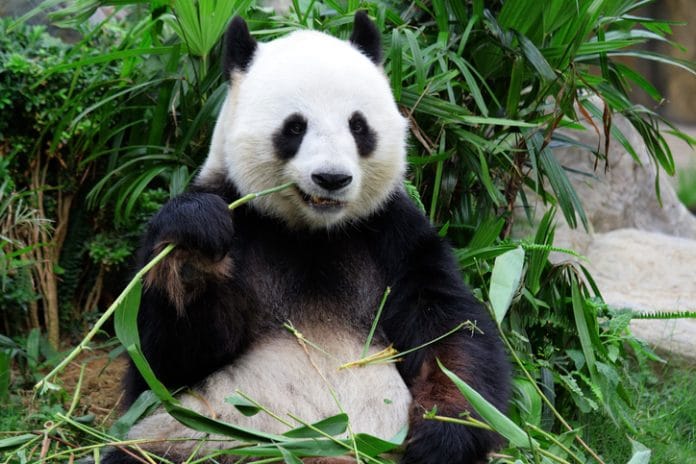 In contrast to the many flamboyant species of birds, most of the 5,000 species of mammals are drab browns or greys. But there are a small number of well known and intriguing exceptions, most notably zebras, skunks, and orcas.

Perhaps the most famous of all, however, is the giant panda. We already had a preliminary idea why they had their markings, but wanted to finally confirm the reason for its mysterious pattern.

Viewed up close in a zoo, the giant panda is a striking conspicuous mix of a white bear with black forelegs, shoulders and hind legs, and an extraordinary face with black fur around the eyes and ears. By comparing these different parts of the body with the coloration of other carnivores (pandas are officially classified as carnivores, contrary to popular belief) and also with bears, we already knew that carnivores with white backs are found in snowy environments, and those with dark legs and shoulders are found in shady habitats. This suggested that the fur was an adaptation to be camouflaged in different environments.

Nowadays, giant pandas are confined to isolated forests in western China, where there are relatively few predators. But we needed to confirm that the camouflage was effective against the giant pandas’ former predators – tigers, leopards, Asiatic black bears and dholes, a wild dog – from the days when they ranged right across China into Vietnam.

The breakthrough came when we linked up with colleagues in the Chinese Academy of Sciences, Yong-gang Nei and FuWen Wei. They work with giant pandas in the field and had rare photographs of wild giant pandas. Crucially, the photos of the bears in their natural habitat were taken at a distance from the camera.

We used state-of-the art image analysis techniques to demonstrate that the unique colourings do indeed work to disguise the giant panda.

By matching reflectance (the amount of light reflected) from the giant panda’s fur with natural objects in the background, we discovered that their black fur patches blend in with dark shades and with tree trunks, whereas their white patches match bright foliage and snow when present. Also, infrequent pale brown fur tones – muddy fur – match the colour of the ground. This provides an intermediate colour which bridges the gap between the very dark and very light visual elements in the natural habitat.

These results are consistent whether viewed by humans, feline or canine vision models. Domestic dog and cat visual systems are well known and are good surrogates for the visual systems of the giant panda’s natural predators such as tigers and wild dogs.

Next, we examined a second form of camouflage – something termed disruptive colouration – in which highly visible patches on an animal break up its outline by blending in with patches in the background.

We found that giant pandas show this form of defensive coloration, especially at longer viewing distances of at least 60 metres away. At these distances, the outline of the giant panda becomes difficult to recognise as the black fur patches blend into the background dark rocks and tree trunks.

Finally, we used a novel colour mapping technique to compare how well animals merge into their background across a variety of species, including the giant panda. This comparative analysis confirmed that the background resemblance of the giant panda fell solidly within the group of other species that are traditionally considered as very well camouflaged, right next to shore crabs and jerboas, a desert rodent.

So although giant pandas in zoos or other captive settings are highly conspicuous to us, it is because we see them up close and surrounded by artificial backgrounds. But when in the wild and at a distance, our research shows that they are beautifully camouflaged, using two different mechanisms to avoid detection.

Giant pandas are a much loved species, and doing better now in the wild thanks to extraordinary conservation efforts by the Chinese authorities. So the future of this species is cautiously optimistic. Hopefully more people will be able to see pandas in their natural habitat in the future.

Tim Carro studies the evolution and ecology of animal coloration focusing particularly on mammals and decapods. He conducts fieldwork in Tanzania and UK on zebras and horses, on coconut crabs on the Zanzibar archipelago, and on crabs and anemones in UK. His work is highly collaborative involving phylogenetic macroevolutionary comparative studies, simple field experiments, and state-of-the-art photographic techniques to test classic hypotheses about coloration of often charismatic conspicuous species.

Nick Scott-Samuel‘s research was initially concerned with the visual perception of motion by humans, but I’ve become sidetracked over time by various other things, including the perception of food and drink, camouflage, visual search and the estimation of numerosity. For more on his camouflage research, please go to www.camolab.com

Ossi Nokelainen is broadly interested in animal coloration, polymorphism and predator-prey interactions. He uses multispectral imaging, vision modeling and experimental approaches at the interface of sensory and evolutionary ecology. He is especially interested how animals see the world and how perception shapes the function of coloration in animals.