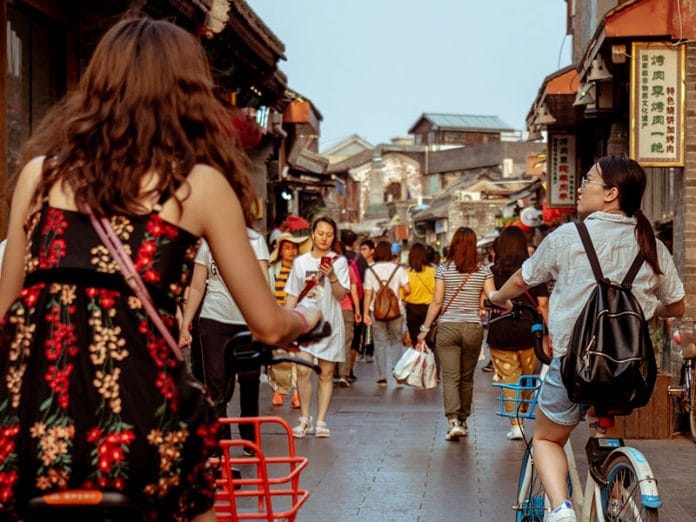 In China, if you are female, educated and unmarried by the age of 27, people might use a particular term – “Sheng-nu” – to describe your social status. It translates simply as “leftover women”.

The label was deliberately invented to curb the rising number of single women in a traditional society which sometimes views not marrying as a moral transgression. Some even consider it a threat to national security.

Indeed, portrayals of single women as lonely, desperate, overqualified and intimidating appear regularly in Chinese media and news outlets. Research has shown that the “sheng-nu” stigma has pressurised many women into marriage.

But others are fighting back.

Partly as a result of the expansion of mass education since the economic reform of the 1980s, women in China appear to be increasingly confident about their place in modern society.

The 7 million single women aged 25 to 34 in urban China are among the largest contributors to the country’s growth. Women now contribute some 41% to China’s GDP, the largest proportion of any country in the world.

And our research reveals that single professional Chinese women are changing how others see them not through protest or activism – but through their economic power. They are using consumerism to counteract longstanding stigma over their single status.

One 33-year-old woman told us:

“During family gatherings, my aunt just loves to tease my parents about why I’m still single. In her mind, I must lead a miserable life. I need to defend my parents [so] I constantly upgrade my own self-image by buying myself more and more expensive clothes to wear.”

She continued: “I want the best of everything in life. My sunglasses are from Burberry, my handbag is from Louis Vuitton, my laptop is from Apple.”

“I show that I’m not miserable and I lead a great life. [My relatives] can then leave my parents alone.”

And a 30-year-old explained: “The more people want to laugh at you, the more glamorous you need to look in front of them. When you look glamorous, people become more tolerant of you [and your family].”

An IT developer of 35 recalled: “When I bought my mother a golden ring, she was over the moon. My father was very poor when they got married, so she never received a ring from him. I wanted to show both of them that I can afford many, many things.”

The marketplace is also capitalising on the rise of singlehood and its economic muscle. China’s “Singles’ Day”, invented in 2009 by the e-commerce giant Alibaba as a kind of anti-Valentine’s celebration for single people, has overtaken Black Friday to become the biggest annual shopping festival in the world.

Held on November 11 every year (the date was chosen because of the four number ones in the date 11.11), 2021 has seen record levels of spending.

Japanese beauty company SK-II has also seen a growth in sales after it launched a series of popular videos featuring successful professional women who have chosen not to marry.

Of course, not all single women in China can afford to demonstrate this kind of spending power. But our study suggests that for those who can, a new sense of economic liberty helps to define themselves and their place in Chinese society.

The chance to spend money on themselves – and often on gifts for their parents – helps to positively redefine their single status as something to be proud of.

Through conspicuous consumption, they promote themselves as morally upright, economically independent, successful citizens. The women in our study are deploying the power of the market to counteract the “sheng-nu” stigma and its spread.

As another woman commented: “Single women really should go out more, especially when they are not bound by family life. Go out and see new scenery, experience a new life. You might realise there is another possibility to live.”

Despite its rise in contemporary China and Hong Kong, the act of protesting can lead to imprisonment and severe consequences. For stigmatised “sheng-nu” women, direct confrontation in the form of social activism could lead to serious professional or legal consequences.

Instead, consumption and economic power has become a way for these women to build legitimacy for an alternative lifestyle. Their struggle pits the modernising and global power of the contemporary market against the traditional cultural authority and media power of China’s modern party state. And in a surprising turn of events, it looks like the single women are winning.

Dr. Chih-Ling Liu is Lecturer in Marketing, Lancaster University. Her research activity is predominantly in the area of consumer culture theory, exploring the interrelationships between consumption, self and identity, with a specific focus on improving consumer welfare and subjective wellbeing.

Robert V. Kozinets is an academic who has developed methods and theories that are widely used around the world. In 1995, in a study of fan utopian community, he invented netnography, an application of cultural anthropology to digital networks. Since that time, he has taught digital research methods combined with marketing and branding theories, practices, and ethical praxis to academics as well as to companies such as Lowe’s, AMEX, Nissan, TD Bank, Campbell Soup, L’Oréal, Sony, Merck, and many others. Asking questions about technology, entertainment, utopia, and desire, his research pushes for more cultural and ethical approaches to studying media. His research has been cited over 30,000 times according to Google Scholar. He currently holds the Jayne and Hans Hufschmid Chair of Strategic Public Relations and Business Communication at the University of Southern California’s Annenberg School for Communication and Journalism and Marshall School of Business.