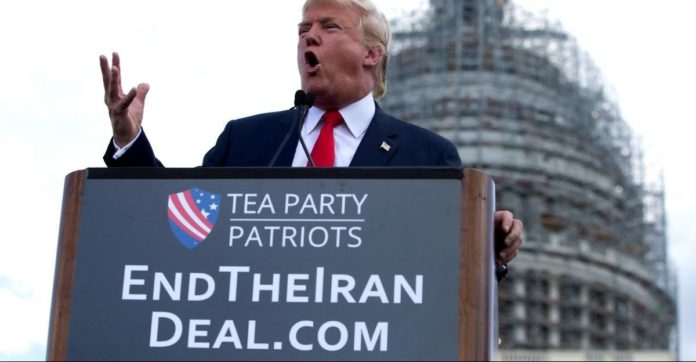 Iran is the most important partner of Russia and Syria in fighting Islamic terrorism, made in USA. Iran is also in the long run, the stabilising factor in the Middle East. Washington needs a big war to sustain its sick and faltering economy. For the Washington hegemon, the Middle East is not to become a stable region.

Did Trump cheat us all with his campaign promises and his succinct “to the point” Inaugural Address? Or did he just deceive some of us, some of the time, and the rest will be taken care of by a more or less sophisticated trickery? – A gambit, one of which is Iran?

After all, we know how he has been elected. Among the ruses used was a distinct scheme of mind manipulation, targeting specific voter groups in swing states, just as many as necessary to swing the state in his favour. This allowed him to capture a large majority of electoral votes, making him the winner, but running almost 3 million popular votes behind Hillary (“Mind Manipulations” to Influence Election Results – http://www.globalresearch.ca/mind-manipulations-to-influence-election-results/5566894).

By no means is this a plea for Hillary. With her in the White House we might already be in WWIII, I mean the nuclear version of it. But it shows that the choice Americans were given was rigged from the very beginning, as it usually is. It was either “business as usual” or “business as usual – plus”. I don’t dare guessing what we have now. But for sure it isn’t going to be peace for America and the rest of the world anytime soon. Not by a long shot. Not even near the prospects Trump put out when he said he would like to make peace with Russia, have Russia as a partner, rather than an enemy, and he would put an end to interventions in foreign countries. He specifically pointed to Syria, where he would not insist on a “regime change”, but rather fight efficiently and in collaboration with Mr. Putin, Islamic terrorism, i.e. ISIS, Al-Nusra, Al-Qaeda and whatever other names they give themselves.

The picture today looks quite different. Although, Mr. Trump said from the very beginning he didn’t like Obama’s Nuclear Deal with Iran, and that he would like to rip it up. But why would he want to do this? First, he assured his electorate no more interfering in foreign countries – which for many Americans was the reason for voting Trump; and second, he knows that this deal is not just an “Obama Deal”.