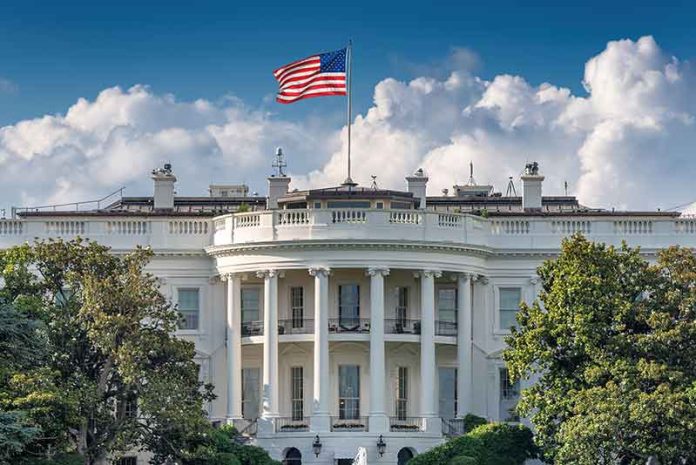 The Biden administration’s leadership failure is the net effect of Capitol Hill’s revolving door politics. The White House is not in charge. The Big Defense is.

In a recent China policy speech, secretary of state Antony Blinken managed to add a bunch of new “strategic ambiguities” to the Biden administration’s old contradictions. Progressive Democrats have lost trust in the administration. They are concerned with American welfare and the triple bear market in US stocks, bonds, and cash.

With de-globalization, international macroeconomic conditions are deteriorating. The number of globally displaced people exceeds 100 million for the first time on record, propelled by the war in Ukraine and other fatal conflicts. The fragile status quo is more likely to worsen than not, due to the Fed’s rate hikes and quantitative tightening.

Yet, the White House seems intent to escalate its new Cold War with China. That’s not in line with America’s national interest, as evidenced by the dramatic plunge of Biden’s approval ratings, but it will benefit the Big Defense.

Let’s start with the links (Figure 1).

As the president’s coordinator for Indo-Pacific affairs on the National Security Council (NSC), Kurt Campbell is president Biden’s Asia czar. In 2019, he and Sullivan introduced their China doctrine of stiff “competition without catastrophe,” which would allow America to “both challenge and coexist with China.” The doctrine is central to the “pivot to Asia,” which Campbell developed in the Obama administration.

The illusionary assumption is that the escalation of discord into open animosity is viable without collateral damage. Replacing the old Soviet Union with China, Campbell and Sullivan declared Beijing America’s pre-eminent rival; and hence the target of the “Indo-Pacific” containment.

As in the ‘50s, the effective objective is to militarize containment and minimize US costs by diversifying risks to allies and proxy conflicts to Asia. The idea seems to be to fight to the last Asian.

The new Cold War promoters like to quote George Kennan, the architect of US containment against Kremlin in 1947. Here’s the irony: Kennan himself pushed for dialogue with Moscow already by 1948. He denounced Truman administration’s “distorted and militarized” version of containment, which “led to 40 years of unnecessary, fearfully expensive and disoriented process of the Cold War.”

One of president Biden’s first acts was to issue a new ethics pledge to weaken shadow lobbying. Yet, his key figures in defense, security and foreign affairs have made fortunes in such lobbying. Campbell is not just a veteran diplomat, but former CEO of the Asia Group LLC. By its own testimony, the secretive company has Fortune 500 clients, particularly in defense and military high-tech.

In January 2021, Campbell’s appointment unleashed a public debate in the US, due to his portfolio of ex-clients rife with potential conflicts of interests. “Shadow lobbying” outfits, like Campbell’s firm, call themselves consultants to avoid restrictions associated with traditional lobbying. Campbell himself got $25,000 monthly retainer from several defense firms.

In November 2021, Biden nominated Fed governor Lael Brainard to serve as its vice chair. In the past, Brainard was seen as a dove. As the Fed is tackling soaring inflation months belatedly, it is overshooting in a hurry. After the confirmation of her appointment, Brainard is now promoting rapid rate hikes. She is an accomplished veteran Democrat, like her husband – Kurt Campbell.

So, in addition to Campbell’s alleged conflicts of interests, the husband-wife linkage reinforces critics’ perceptions of tacit collusion in decision-making by the executive branch, monetary chiefs, capital markets, Pentagon and the Big Defense.

And Campbell is not alone.

Jake Sullivan advised some of the world’s biggest businesses at Macro Advisory Partners, a secretive firm that is run by ex-British spy chiefs. In that role, Sullivan, who had been negotiating the Obama JCPOA nuclear deal, used his expertise to help companies exploit the opening of the Iranian economy.

Macro Advisory also guides state-owned entities, such as Taipei Economic and Cultural Representative Office in the US. Unsurprisingly, the militarization of US Taiwan policy shifts toward and weapons shipments to Taiwan has escalated in parallel with Taipei’s big donations to Biden’s corporate proxies.

Blinken has his alleged conflicts of interest. Between the Obama and Biden administrations, Blinken co-headed WestExec Advisors with Michèle Flournoy, Obama’s undersecretary of defense and a military expert. With key clientele in defense industry, private equity, and hedge funds, WestExec ensured Blinken over $1.2 million dollars in compensation.

Even before WestExec, Flournoy was making over $450,000 a year as a head of a think-tank, Center of New American Security (CNAS), which she co-founded in 2007 with Kurt Campbell. Biden’s former press secretary Jen Psaki and current CIA head Avril Haines, who had contributed to Obama’s drone program for extrajudicial killings, also served in CNAS, which was led by CEO Victoria Nuland, a neoconservative uber-hawk, who has played a key role in the Ukraine escalation as Biden’s undersecretary of state.

Flournoy and Blinken also served as strategic partners in a private equity firm Pine Island Capital Partners, led by controversial investment banker John Thain who tanked Merrill Lynch in 2008, while paying himself bonuses along the way. Amid the subprime debacle, Thain spent $1.2 million to remodel his office, including a $35,000 golden toilet.

By late 2020, Pine Island Capital, now linked with the Biden administration, was well-positioned to cash in on the US Covid-19 response, investing in government contractors. The firm also employed Lloyd Austin, the first black secretary of defense.

A veteran of the US Army (1975-2012), Austin has a remarkable story, but it, too, reflects revolving door hazards. As head of US Forces in Iraq, he befriended Biden’s son, Beau (Hunter, the other son, was linked with the Trump era “Ukrainegate”). He was then nominated to become the Army’s vice chief of staff. A year later, then-president Obama tapped Austin to head up US Central Command.

After the Trump triumph, Austin left the Army and joined the board of steel colossus Nucor, a beneficiary of Trump’s tariff wars, and military contractors that merged in 2020 with Raytheon, a top Big Defense lobbying spender. Austin earned seven figures from the defense companies until he stepped down from all three board positions following his nomination in 2020.

With the deterioration of macroeconomic conditions, geopolitical divisions have rapidly increased from the Middle East to Asia, even to Europe? Big Defense has been the prime beneficiary (Figure 2). As Investor’s Business Daily headlined in March, “Russia’s War On Ukraine Makes Defense Investors $49 Billion Richer.” Without a full policy reset, this is just a prelude to far worse in Asia. 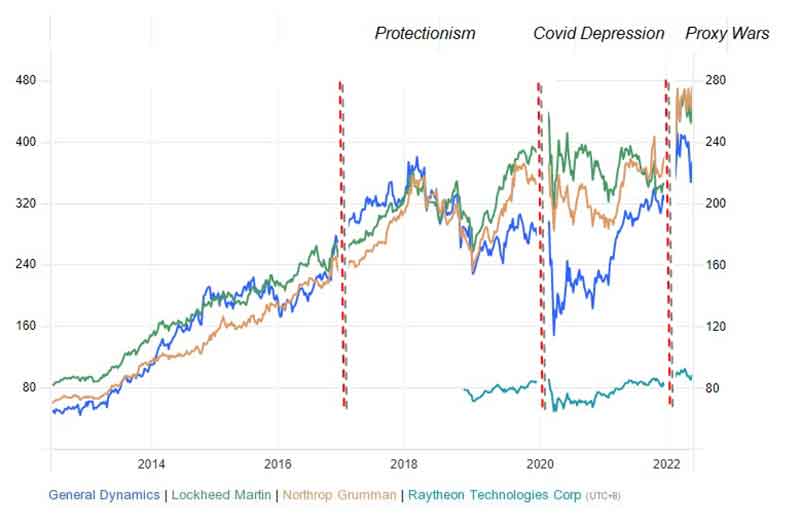 In mid-May, NBC’s Meet the Press aired a segment, which imagined a conflict over Taiwan in 2027. In the war game simulation, run by CNAS, the US-Sino tensions burst into an open war. What made Beijing opt for the year 2027? Nothing. The year was “postulated” by the controversial outgoing Commander of US Indo-Pacific Command, Admiral Philip Davidson already in March 2021.

What’s the CNAS solution? Flournoy demands US to develop “the capability to credibly threaten to sink all of China’s military vessels, submarines, and merchant ships in the South China Sea within 72 hours.” Whether that would contribute to peace is debatable, but it is certainly in line with the interests of CNAS donors, such as Northrop Grumman, Austin’s alumni in Raytheon, Lockheed Martin, and of course Taipei’s US office.

The original version was published by China-US Focus on June 2, 2022