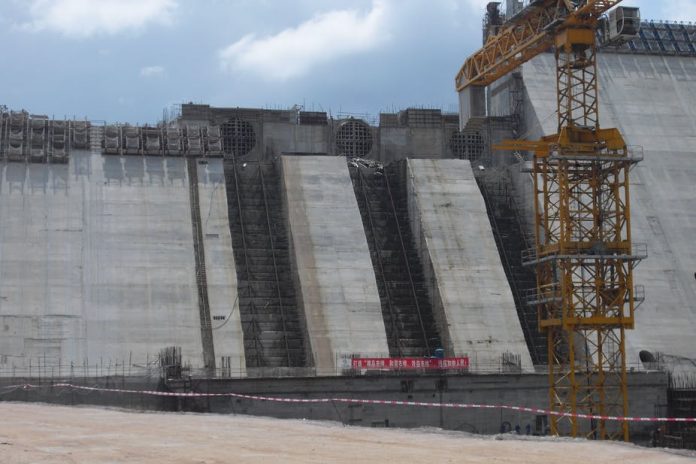 Contemporary China-Ghana relations follow a similar script with the Bui Dam playing a crucial role in the narrative. The magnitude of the Bui Dam and the amount involved set it apart from previous China-funded projects, including the National Theatre which was built in 1993.

Before China’s involvement, the World Bank and European Investment Bank had rejected the dam proposal due to environmental sustainability fears. This followed investigations by the World Commission on Dams and fears about Ghana’s inadequate handling of socio-economic issues resulting from the Akosombo and Kpong dams.

When sod for the Bui project was cut in 2007, it represented China’s most significant investment in Ghana. It was also the second highest foreign direct investment in Ghana after the Akosombo Dam. At the cost of $790 million, the dam had the trappings of everything China needed to build a positive image.

When construction started in 2006, Ghana wasn’t producing enough electricity. Shortfalls led to rationing. The government touted the dam as a solution to this problem. The construction also promised to create 4,000 jobs and socio-economic transformation.

In my research I examined the dam’s significance to relations between the two countries. I looked at how China used the project to cultivate soft power. The American political scientist Joseph Nye describes soft power as a country’s ability to persuade others to want what it wants. A country’s soft power can derive from its culture, political values and foreign policies.

I concluded that indeed the project facilitated market expansion by Chinese companies in the intervening decades. These included Sinohydro, Shanghai Corporation and China International Water and Electric Corporation. I also found that soft power was productive at the macro level such as increased government-to-government interactions. But it was limited at lower levels involving people-to-people relations.

The arrangement between China and Ghana that enabled the completion of the dam was done under a resource-for-infrastructure framework. This approach involved the exchange of African resources for China-funded infrastructure. The Bui Dam was secured by exporting 40,000 tons of cocoa beans from Ghana to China until the power sale arrangement kicked in when the project was completed.

There are actors in Ghana’s administration who were deeply enthusiastic about China’s involvement. As one ministry of finance official told me: Bui wouldn’t have materialised without China’s help.

But my research shows that, like other actors in Africa, China is a self-interested player. It used its soft power to facilitate its broader foreign policy goals, especially the market expansion of its companies and goods, employment of its citizens, and its companies’ long-term stays.

This was achieved in a number of ways.

The first was through the structure China uses for all mega water projects. It involves government agencies as well as private corporations working in China that manage water. Members interact with each other – and outside networks – to get dams built.

Overseas the structure also uses its influence and power to facilitate other investments, and the creation of other businesses.

The Bui Dam project was an example of this. It involved China providing labour, engineering and financing opportunities for its members. The role played by Sinohydro illustrates this. Even though the company handed over the dam to Ghanaian authorities in 2013, it stayed in the country, diversifying from dam to road and bridge construction.

The project was approved by Ghana’s Parliament, which also established the Bui Power Authority to coordinate and manage the dam’s construction. The contract with the Chinese company had a quota for how many Chinese could be employed on the project. This was never made public but I learnt it in several interviews with Ministry of Finance and Ministry of Energy officials.

The goodwill engendered by the project also allowed private Chinese citizens to visit Ghana and prospect for business opportunities. State investment data show that the number of Chinese projects and investments in Ghana has rapidly accelerated over the past two decades. Today, China is not only Ghana’s primary source of foreign direct investment, but principal trading partner and infrastructure financier.

Another conspicuous dimension of growing China-Ghana relations is the surge in Chinese migrants to Ghana and vice versa. Although the Ghana Immigration Service does not make public the number of Chinese migrants, some academics have pegged the numbers at about 30,000, a number that’s much larger than the estimates of two decades ago.

Ghana has emerged as the African country with the most students in China.

These commercial and associated activities and exchanges will continue to deepen with the Belt and Road Initiative. Ghana signed on to the initiative in 2018 and has already negotiated a $2 billion deal enabling Sinohydro to provide infrastructure, such as roads and bridges, across the country in exchange for refined bauxite.

The outcomes of the Bui Dam offer crucial lessons for future engagements between China and Ghana.

Ghana must see beyond China’s do-good narratives and try to engage on equal terms. The Belt and Road Initiative brings new opportunities and challenges that require a proactive and effective state strategy to optimise the gains.

It’s commendable that the government has formed an advisory committee to formulate strategies to engage China productively. Hopefully, its recommendations will help shape China-Ghana relations for the better and eliminate the prevailing asymmetries.

Kwame Adovor Tsikudo is a human-environment and development geographer with the Department of Geography at Augustana College. He was previously with the Department of Geography and Geographic Information Science and an affiliate faculty at the Centre for African Studies at the University of Illinois at Urbana-Champaign. His works on political economy, the environment, and south-south cooperation have been published as book chapters, policy briefs, and articles in journals, including Science of the Total Environment. He also has forthcoming articles in the Journal of Contemporary African Studies, African Geographical Review, and Geoforum.