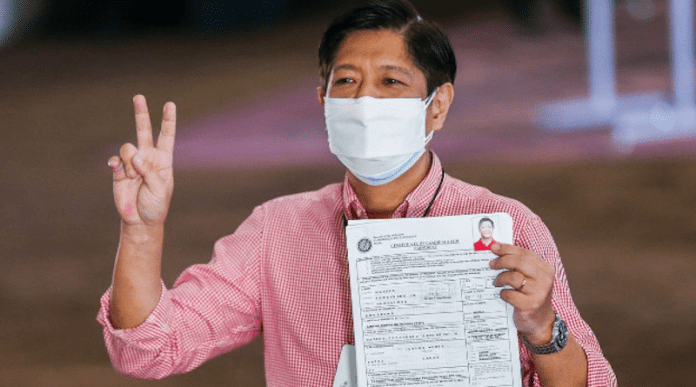 Overshadowed by US-Sino friction and xenophobic rhetoric, the 2022 election campaigns are getting ugly. Old elites hope to derail leading candidates while consolidating a set of US-Philippine military faits accomplis before the vote.

Recently, China and the Association of Southeast Asian Nations (ASEAN) established a comprehensive strategic partnership, a new bilateral milestone. However, the future course of the post-Duterte Philippines is less clear.

The goal of the once-dominant pro-US liberals is to tie Manila with the US-led Indo-Pacific front and the Quadrilateral Security Dialogue – before the democratic vote.

Will Manila deepen its integration with the ASEAN, rebalance its ties between the US and China and reinforce development? Or will it opt for militarized US ties, shun China, split the region and foster inequality?

The candidates, the polls

As the former governor of Ilocos Norte province, Marcos, the only son of the controversial ex-president (1965-86), has a strong foothold in the north. The daughter of the incumbent president dominates the south. And both are very popular in Metro Manila.

Senator “Bong” Go (4%), president Duterte’s longtime right-hand, has a strong track-record, but he says he will withdraw his candidacy. As a senator, the beloved ex-world-class boxer Manny Pacquiao (3%) has a weak track-record and as a candidate he doesn’t pull a punch. Ex-chief of national police Panfilo Lacson (3%) has made his career as an anti-corruption advocate, but enjoys little national support.

Public, covert and other controversies

Sara Duterte expected consolidated unity after Go’s withdrawal. Having expressed some reservations about Marcos’s candidacy, president Duterte and his party (PDP-Laban) may still adopt another standard-bearer for the 2022 elections.

Moreover, due to their superior lead, Marcos and Duterte will be attacked hard in public, covertly and otherwise. The prelude includes polls funded by pro-liberal interests in which Domagoso, Robredo and even Pacquiao have been promoted as likely or potential future winners.

The epilogue might feature 2022 election, due to Comelec’s reliance on Smartmatic technology, which has been linked with a set of international political controversies, and US-based Pro V&V Inc. holding the ‘source code review’ of software to be used in the 2022 elections.

Pro V&V is accredited by the US Election Assistance Commission (EAC), which itself has been criticized for succumbing to political pressure in the Bush era and the Trump years, when critics thought the troubled EAC “could undermine the effort to safeguard the 2020 presidential contest from foreign meddling.”

After their electoral meltdown in 2016, the liberals no longer enjoy the support of the Filipino majority. But the LP is supported by the country’s economic elite. In the coming months, the liberal interests are likely to do what they can to destabilize the Marcos-Duterte lead and comparable alternatives.

They abhor the reality that China has become the Philippines’ largest trading partner, the second largest foreign investor, and the second largest source of foreign tourists. So, they seek a return to the pre-Duterte status quo, by any means available.

During its three-decade reign until 2016, LP failed to initiate Philippine modernization. Every fourth Filipino lived in poverty and the gap between the rich and the poor remained steep. Even today, the top-10% elite controls some 46% the national income, in which the bottom-half have a share of less than 15%.

Ironically, relative to other emerging ASEAN economies, the elite share soared with the People Power Revolution. In just a decade, it peaked at almost 55% of the economy until the 1997 Asian crisis, when it exceeded that of Myanmar. As the dominance has gradually fallen, inequality in Lao and Indonesia has risen above that in the Philippines (Figure 2).

Liberal veterans support Robredo as the head of the anti-Duterte “unified opposition.” The “pro-democracy” group is led by ex-Supreme Court Justice Antonio Carpio, the proponent of the “West Philippine Sea,” and ex-foreign secretary Albert Del Rosario, millionaire businessman and key player in the liberal pro-US coalition.

In contrast, Bongbong Marcos and Sara Duterte seek to strengthen the economy after the severe pandemic recession. In foreign policy, they would likely try to balance between Chinese development and US military goals. They stress Philippine interests in South China Sea but also the ASEAN talks with China as the bilateral regional Code of Conduct (COC) is to be completed in 2022.

Hence, the frantic effort by Del Rosario and his troops to undermine the Marcos-Duterte ticket and to lock Manila into the Indo-Pacific anti-China front, via increasing friction, possibly an open conflict with China in the South China Sea. The goals are fostered by Del Rosario’s “think-tank” ADRi, which is joined with its parent Stratbase that’s linked with the Washington-based Bower Group Asia and connections with the Center for Strategic and International Studies (CSIS), a leading US think-tank.

In October, ADRi pledged it would “make China the issue of 2022.” Hence, Del Rosario’s call on the Filipinos to “unite against Manchurian candidates,” such as Marcos and Duterte. The evidence for the Cold War paranoia? Marcos had met the Chinese ambassador. By this logic, whoever meets foreign ambassadors is a traitor.

The liberals’ anti-China hyperbola fuels anti-Chinese Sinophobia in which distinctions between China, Taiwan and the Chinese is purposefully conflated. The more Robredo has trailed in the polls, the more she has seized anti-China rhetoric. Domagoso has embraced populism and racist street slang targeting ethnic Chinese and China. To raise his profile, Pacquaio has accused president for giving in to the Chinese. To avoid falling behind the pack, Lacson pledges deeper US military ties.

Peddling xenophobia as patriotic duty is ugly, but sells in troubled times.

Toward faits accomplis before 2022 election

According to Del Rosario, his fight for the South China Sea is for the poor Filipino fishermen. In fact, it may be also about oil extraction. He and his business associates could gain hugely from concession rights in the South China Sea.

It was also during Rosario’s government years that Philippines filed the arbitration case against China. That was followed by the 2014 Enhanced Defense Cooperation Agreement (EDCA), which opened the country to US military, ships, and planes; for the first time since 1991. A year later, Rosario met Obama’s then-deputy secretary of state Antony Blinken in Manila. Future looked bright until Philippine people spoke and Duterte’s 2016 electoral triumph caused a six-year pause in these plans.

Today, after much wheeling and dealing, the US-Philippines Visiting Forces Agreement (VFA) is back in effect, thanks to Del Rosario and a like-minded foreign secretary Theodore Locsin, Harvard Law alumnus; US ambassador Jose Romualdez, chair of the Philippine offices of several US-based multinational companies; and defense secretary Delfin Lorenzana, alumnus of US, UK and Australian military schools and programs.

The strategic goal seems to be a set of military faits accompli with the US before the 2022 election. And perhaps a high-profile maritime conflict; as an official rationale for broadened Mutual Defense Treaty with Washington.

First signs are promising. In early summer, the defense secretaries of Japan and the Philippines agreed on “enhanced defense cooperation.” In October, Philippines agreed to hold over 300 military activities with the US in 2022. Foreign secretary Locsin welcomed the highly controversial US-UK-Australia security pact (AUKUS), based on Canberra’s nuclear-powered submarines, against the 1995 Southeast Asian Nuclear-Weapon-Free Zone Treaty the legally-binding 2021 Treaty on the Prohibition of Nuclear Weapons ratified by Manila, and the Philippine Constitution.

The track record of liberal reforms and armament drives is dark in the Philippines. In the early 1960s, Filipino per capita incomes were far higher relative to Malaysia and over twice as high as in Thailand. By 2016, after decades of liberal leadership and intensified military investments, Philippine per capita incomes have fallen far behind those in Malaysia, Thailand, Indonesia, and Vietnam is waiting for its turn (Figure 3).

Obviously, every Philippine presidential candidate has a full right to his/her policy agendas. Only the Philippines can decide its own future. And like the ASEAN, the Philippines should maintain friendly ties with both the US, the descending Pacific power, and China, the ascending Asian power.

However, the real question is whether that future will be driven by military pacts, which benefit just tiny economic elites, or peaceful development fostering the living standards of ordinary Filipinos.

Rising prosperity is only viable through peace and stability. Anything else will effectively undermine the promise of the “Asian Century,” including efforts to overcome Philippine economic inequality.