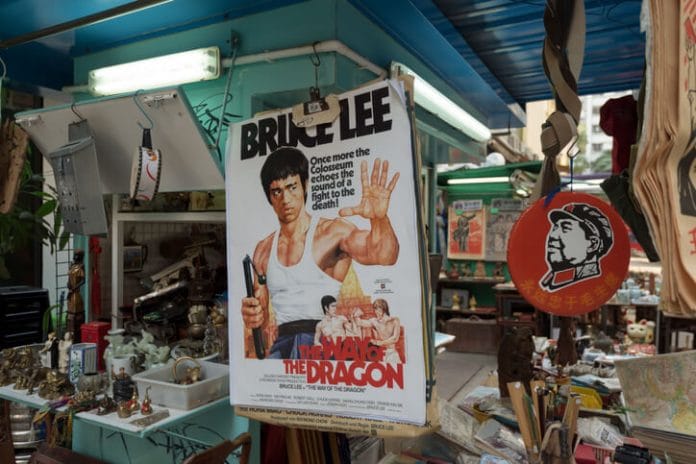 With action sequences that are being hailed as some of the best in the history of the Marvel Cinematic Universe, Shang-Chi and the Legend of the Ten Rings is shaping up to overtake Black Widow as the biggest film of the pandemic.

A hit with critics and audience alike, many commentators are praising Shang-Chi’s cast and, in particular, the performance by Hong Kong screen legend Tony Leung Chiu-wai, for helping breathe new life into a familiar Marvel formula.

Given the huge challenge of presenting a film of this scale with a kung fu master as its central character, it was imperative the filmmakers delivered authentic fight scenes that could stand alongside the classics and showcase the best action the genre has to offer.

Tracing through China, Hong Kong and Hollywood, martial arts films have a history almost as long cinema itself. This history is on exciting display in Shang-Chi, and will cement the film’s position in kung fu cinematic history.

Birth of the kung fu genre and the first boom

This changed with the transformation of Hong Kong cinema in the 1970s. Resisting the fantastical elements of the wuxia style, local studios Shaw Brothers and Golden Harvest put actual martial artists into their films.

With this move, the kung fu genre was born.

Popular titles of the time like Five Deadly Venoms (1978) and The 36th Chamber of Shaolin (1978) are classics, and the films of Bruce Lee brought kung fu to the world’s attention.

Lee’s intense and realistic fighting style, as shown in films like The Big Boss (1971) and Enter the Dragon (1973), sparked an international obsession with the art of kung fu — even as international fans often had to deal with poor-quality dubbing and bootleg videos.

After Lee’s untimely death in 1973, the genre morphed from showcasing ferocious physicality into a more acrobatic, comedy-infused approach, such as in Drunken Master (1978) and The Magnificent Butcher (1979) starring, respectively, Jackie Chan and his China Drama Academy “brother”, Sammo Hung.

In the late 1990s, around the time of Hong Kong’s handover to China, many of the industry’s leading figures made the move to Hollywood.

In 2000, the Chinese blockbuster Crouching Tiger, Hidden Dragon showed modern international audiences now had an appetite for the elaborate swordplay and gravity-defying wirework of wuxia films, and many stars returned to China to capitalised on the trend.

Jet Li’s Hero (2002) and Fearless (2006), as well as House of Flying Daggers (2004) and the first film to feature both Jackie Chan and Jet Li, Forbidden Kingdom (2008), all helped to redefine the martial arts film: bringing star power and global audiences to an industry that had, until then, largely received only local attention.

Marvel’s “other kung fu hero”, Iron Fist from the 2017 Netflix series of the same name, was controversial. The star, Finn Jones, lacked martial arts experience, and the show was criticised for its “white saviour” narrative.

In light of this, the producers of Shang-Chi were keen to bring together a predominantly Asian and Asian-American cast and crew who could do justice to the first Asian superhero to headline a Marvel feature film.

This has paid off: Shang-Chi is being praised as both a classic Marvel superhero film, and an exceptional kung fu film in its own right.

Under fight director Andy Cheng and stunt coordinator Brad Allan, the film draws upon a range of different styles, including wing chun, Shaolin kung fu, bajiquan and hung ga stances, and the iron rings from which the film gets its title.

Hollywood has come a long way from declaring Lee “too authentic” to take the lead role in the original 1970s Kung Fu television series. Shang-Chi is likely to inspire a whole new generation of kung fu cinema fans.

Dr Joyleen Christensen is a Senior Lecturer in Screen, Media, and Cultural Studies at the University of Newcastle, Australia. She researches popular culture – with an emphasis on celebrity and fan cultures in film, television, and music. As 2015 Visiting Scholar with the University of British Colombia’s Centre for Cinema Studies, she researched the reception of Hong Kong superstar, Andy Lau, across national borders and has also examined Lau’s celebrity against significant social and historical movements in regional and transnational cultural relations over a period of thirty years.