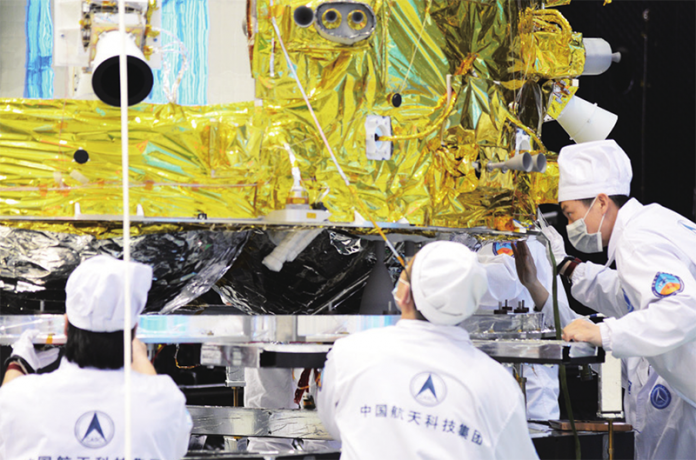 China has been the only country to land on the Moon for over 40 years – since the Soviet Luna programme. Its recent Chang’e missions (1-4) demonstrated that China could not only orbit and land on the Moon, but also successfully operate a rover. On November 24, the Chinese National Space Administration launched Chang’e 5 – the latest in the series.

This mission to collect and return samples is impressive. Recent failed landings on the Moon by an Israeli privately funded mission and the Indian Vikram lander show just how challenging such missions still are.

So is this solely a case of China using space exploration to show the world that its new scientific and technological capabilities rival those in the west? And if so, what are the consequences?

Chang’e 5 (named after the Chinese goddess of the Moon) is intended to collect samples from Mons Rümker, a 70km-wide, 500 metre- high dome made of basalt in the Oceanus Procellarum Mare region of the Moon’s nearside.

The plan is to then bring back 2kg of drilled and scooped samples to Earth. If the mission succeeds, planetary scientists will be able to test some key theories about the origin of the Moon and the inner Solar System’s rocky planets, which date back to the Apollo era

The age of a rocky body can be estimated based on its density of craters. The longer a body has existed, the more debris will have bombarded its surface. But it isn’t a very precise measurement. Estimates of the age of Mons Rümker and its surrounding area, derived from the number of impact craters on it, have ranged from over 3 billion to 1 billion years.

The absolute age of returned samples will be determined with radiometric dating. This is a method of dating geological specimens by working out the relative proportions of particular radioactive isotopes (elements with more or fewer particles in the atomic nucleus than the standard substance) that they contain. This will help us better understand how crater density corresponds to age. And that can then be used to improve crater-density age models of surfaces on the Moon and Mars, Mercury and Venus.

Few would argue with the fact that the rise of China’s space programme – which involves satellites, human missions and a space station planned for 2022 – has been rapid and successful. But it has competition. The US-led Artemis Programme has set an aim to return humans to the Moon by 2024, which would notably be before any Chinese taikonaut landing.

The European Space Agency also has its own plans for the Moon, including the European Large Logistics Lander EL3, which aims to deliver a 1.3-tonne lander with new scientific experiments in the late 2020s. However, China’s plans for the Moon are becoming more ambitious than Europe’s. A new cohort of 18 Chinese trainee taikonauts has recently started their training with long-term aims of crewing their new space station, walking on the Moon and ultimately reaching Mars.

China’s capabilities will no doubt continue to grow. As a scientist in the west, I wonder how this will shape research in future generations. Will Chinese universities start to lead space research and influence rankings that are currently dominated by western universities? Is this rapid development a good thing, given that the Chinese state is not democratic?

There are reasons for optimism, such as potential collaboration – at least between Europe and China. The fact that many geochemical models of lunar and planetary formation have their roots in the 380kg of samples brought back by the Apollo missions means that there is worldwide excitement among scientists about sampling a new area of the Moon. Planetary scientists in the west are in fact taking a keen interest in Chang’e 5 and the Chinese lunar programme.

One of my earliest memories of space science was seeing the successful US-Soviet Skylab space station link up in 1973-74. That was a counter balance to the cold war era politics of the time, and it happened despite the absence of democracy in the Soviet Union.

As a university scientist, I believe that the presence of many Chinese students on our campuses over the last decade could help promote future collaboration and changes. COVID-19 is hindering that now, so I will be hoping that Chang’e 5 is successful and becomes a route to future collaboration which might help defuse tension.