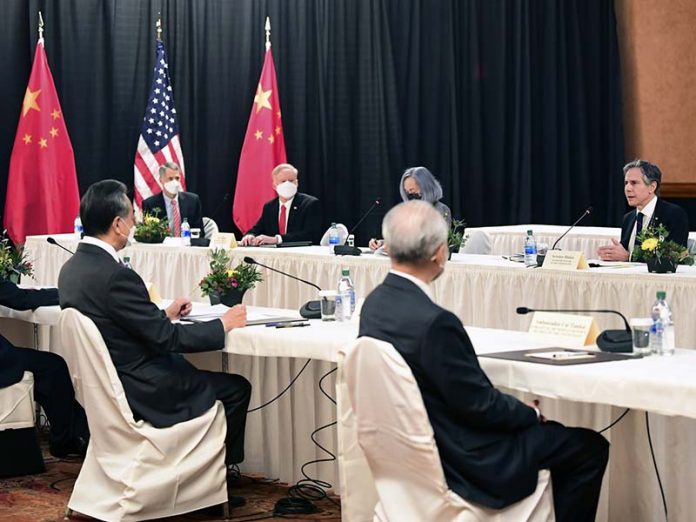 In contrast to the hopes of moderate bipartisan voices, Blinken’s China vision builds on the Trump-Pompeo unipolarity, at the expense of US business and American people. The semiconductor debacle is a prelude to future.

Recently, Anne O. Krueger, World Bank’s former chief economist, noted that, following four years of a modus operandi to bully China, Trump’s trade war is “a failure that harmed both China and the US.”

Like Krueger, many progressive Democrats and global-minded Republicans hoped a reset of US-China relations. That’s why US Secretary of State Antony Blinken’s foreign policy speech was seen as a huge disappointment.

At the minimum, the old-new-Pompeo-Trump-Biden China vision is a pretext for managed trade. At worst, it seeks to replace business success with geopolitics.

In early February, Blinken applauded President Trump for having been “right to take a tougher approach to China.” The tacit assumption is that the trade war was a success and in the interest of American people and business.

And yet, that was precisely not the case. Trump’s trade war, as Krueger and most economists have concluded, not only harmed both bilateral partners, but caused US deficits to soar to record heights.

Unilateral tariff wars cannot resolve America’s domestic and multilateral vulnerabilities. And perhaps that’s why the Trump and Biden administrations have opted for bigger guns – ones that will make a bad status quo a lot worse.

In late February, US signaled it planned to move ahead with a Trump administration-proposed rule to “secure” the information-technology (IT) supply chain. The interim rule, which Trump proposed in January, will allow the Department of Commerce to monitor transactions of governments, including China’s. It is a pretext to an odd effort to weaponize the entire global IT ecosystem, in peacetime conditions.

Understandably, American technology giants oppose the rule and have warned the Biden administration about the consequent damage in the US economy. “By the Commerce Department’s own estimate,” says IBM Regulatory Vice President Christopher Padilla, “this rule would impose many billions of dollars in new compliance costs on millions of US firms, including countless small businesses.”

Why is Blinken pushing such “such a massive, overbroad, and economically damaging rule” against the interests of American business? The simple response is that his goals are dictated by neoconservative geopolitics rather than US interests.

When Blinken began to tout Trump’s interim rule, it paralleled the Biden administration’s cooperation with Pentagon and Silicon Valley, as exemplified by the activities of Eric Schmidt, former CEO of Google (2001-2011), executive chairman of its Alphabet Inc. (2015-17) and financier of Obama, Clinton and Biden campaigns.

Schmidt headed the advisory board (2016-20) of the Department of Defense (DoD) aiming at connecting Silicon Valley with Pentagon, followed by the National Security Commission on Artificial Intelligence (2019-21) and his current government work to create a military technology college.

As Blinken began to push his old-new-Pompeo-Trump-Biden China vision, Schmidt submitted his recommendations to President Biden and the Congress. “The US and its allies,” he noted, “should utilize targeted export controls on high-end semiconductor manufacturing equipment … to protect existing technical advantages and slow the advancement of China’s semiconductor industry.”

Instead of China’s competitive or trade practices, the objective is to weaponize artificial intelligence (AI), which scientific communities abhor but neoconservatives consider critical for US unipolar military superiority. In these efforts, “national security” is exploited to offset longstanding erosion of US technology competitiveness relative to Chinese, European, Japanese and South Korean rivals.

And since AI requires fifth-generation (5G) platforms that Chinese technology giants, particularly Huawei, have pioneered in and for commercial markets, the State Department seeks to contain Huawei and China’s technology progress, especially its nascent semiconductor industry.

How policymakers endanger US semiconductor futures

In the 1980s, US technology giants pressed the Reagan administration to battle Japanese competition. Today, the Trump-Biden administrations are pushing the reluctant US semiconductor giants to fight China.

As demand for semiconductors has shifted to Asia and industry activities have dispersed, production has globalized. That has boosted the fortunes of US semiconductors, while providing new opportunities to new producers in advanced Asia (Taiwan, South Korea) and emerging Asia (China).

In contrast, the Pompeo-Blinken vision would like to reverse the course of history by forcing re-centralized production in the US. Instead of economic efficiency, the de facto new criteria of success would be geopolitical loyalty to US unipolar supremacy, at the expense of normal business rivalry and consumer welfare. That’s why the Trump-Biden administrations are whipping US semiconductor leaders into a trade war against their wishes.

The policy debacle started in July 2018, when the US imposed 25% tariffs on semiconductors imported from China, causing significant damage in the US industry. Moreover, the tariffs failed as companies like Huawei bypassed US suppliers buying semiconductors from Taiwan and South Korea. Trampling over established business practices, Trump’s policymakers next enacted US export controls targeting the global semiconductor ecosystem. while threatening to cut off niche equipment and software inputs by US firms to Taiwanese and South Korean firms.

As blackmail replaced business strategy; bullying substituted for business practices setting a warped precedent. Worse, the controversial weaponization turned out to be “legally complex and accompanied by considerable unintended consequences,” as analyst Chad P. Bown has argued. Hence, the new effort to use a US-China semiconductor working group to ease tension in industry.

The moral hazards have not gone unnoticed.

When Schmidt began his DoD activities in 2016, Google signed its AI initiative Project Maven contract with Pentagon to analyze drone footage. As work on lethal strikes became public, over 3,000 Google workers protested the deal. With his $13 billion fortune, venture capital firm (and $5.3 billion in Alphabet’s shares), Schmidt has invested millions of dollars into over half a dozen defense start-ups.

Starting in 2016, the first DoD employee complaint against Schmidt raised concerns about his conflicts of interests, which ProPublica’s report documented even before. In the past five years, the ties between Google, Alphabet, Schmidt, his shares and companies have grown so blurry that a federal court ordered him to turn over records that might shed light on whether he has promoted his personal business interests.

Recently, allegations have also been raised about Blinken’s activities. Between the Obama and Biden administrations, Blinken co-headed WestExec Advisors with Michèle Flournoy, a high-profile Clintonite and military consultant. With key clientele in defense industry, private equity firms, and hedge funds, Blinken made his first million dollars in compensation. Even before WestExec Flournoy was making over $450,000 a year as a head of think-tank, funded largely by defense contractors.

In the past year, several US media and progressive Democrats have raised questions about potential conflicts of interest between WestExec principals, and Pine Island advisors. Yet, Blinken portrays his vision as a “foreign policy for the American people.” In his recommendations, Schmidt touted export controls to weaponize semiconductor supply chain. In reality, neither will serve either American people or American business, not even Pentagon. But each has lucrative potential to Blinken, Schmidt and those defense contractors benefiting from forever wars that penalize both American business and people.

A version of the commentary was published by China-US Focus on March 22, 2021

China does not want war, at least not yet. It’s playing...