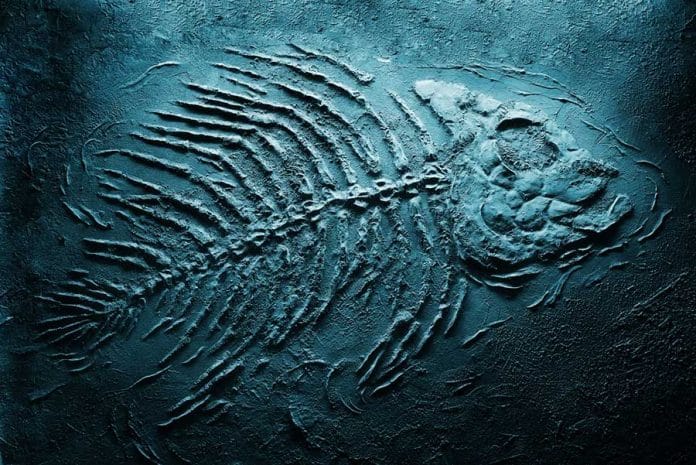 Some of the world’s most significant fossil discoveries have come from China. These include amazing feathered dinosaurs, the earliest modern mammals, and some of the oldest-known animals on Earth.

Today, four new papers published in Nature carry on this tradition by revealing the world’s oldest well-preserved jawed fishes, dating between 436 million and 439 million years ago to the start of the Silurian period.

The fossil discoveries all come from new fossil sites in the Guizhou and Chongqing Provinces in China. The Chongqing site was found in 2019, when three young Chinese palaeontologists were play fighting, and one was kung-fu kicked into the outcrop. Rocks tumbled down, revealing a spectacular fossil inside.

The research teams behind the papers are led by Zhu Min of the Institute of Vertebrate Palaeontology and Palaeoanthropology in Beijing. Min told me:

“The discovery of the Chongqing lagerstatte (a “lagerstatte” is a fossil site of exceptional preservation) is indeed an unbelievable miracle of fossil hunting. Suddenly we realised we have found a jaw-dropping lagerstatte. We are now close to the core of untangling the fishy tree of early jawed vertebrates.”

What kinds of fishes were they?

The origins of these living fish groups are now much clearer due to the new findings of the oldest complete fishes from China.

These were shark-like fishes. Some were placoderms, an extinct class of armoured fish that had bony plates forming a solid shield around the head and trunk.

Others were ancestral kinds of sharks called acanthodians. These are extinct forms of “stem-sharks” that evolved as a separate branch – or stem – of the evolutionary line that led to modern sharks.

Placoderms are the earliest-known jawed vertebrates. Researching them is important as they help reveal the origins of many parts of the human body (including our hearts and faces).

A small flattened placoderm called Xiushanosteus, about three centimetres long, is the most common fish found at the new Chongqing site.

Its skull shows paired bones which reflect those on top of our own heads. Frontal and parietal bones have their origin in these fishes. Zhu You-an, who led the study on these fishes, told me:

“All the things are still like dreams. Today we are staring at complete early Silurian fishes, 11 million years earlier than the previous oldest finds! These are both the most exciting, as well as the most challenging fossils I have had the privilege to work on!”

The world’s oldest sharks and teeth

The new papers also describe the oldest complete shark-like fish, named Shenacanthus. It has a body shape similar to other prehistoric acanthodians (or stem-sharks) – but differs in having thick plates forming armour around it, as seen in placoderms.

The fact that Shenacanthus shares the features of both acanthodians and placoderms suggests these two groups evolved from similar ancestral stock. That said, Shenacanthus retains typical shark-like fin spines so it’s not regarded a placoderm, but a chondrichthyan (the group including today’s cartilaginous sharks).

The research also reveals the oldest-known teeth of any vertebrate – at least 14 million years older than any previous findings. Coming from a fossil chondrichthyan named Qianodus, the teeth are arranged as coiled rows called “whorls”. Such tooth whorls are common at the junction of the jaws in many ancient sharks and some early bony fishes such as Onychodus.

The researchers also found another early stem shark called Fangjinshania at the new site in Giuzhou. More than 300 kilograms of rock were collected and dissolved in weak acetic acid to free thousands of microscopic bits of bone and teeth.

Fangjinshania resembles a stem shark called Climatius known to have lived about 30 million years later in Europe and North America. Fangjinshania lived as far back as 436 million years ago, which tells us the fossil record of such sharks is much older than we previously thought.

Both Fangjinshania and Qianodus were about 10cm-15cm long, making them many times larger than the placoderms and the Shenacanthus. They would have been the top predators in their ancient ecosystem, and the world’s first predators armed with sharp teeth.

Plamen Andreev, the lead author on two of the new papers, told me:

“These new finds give support to the idea that older fossil shark-like scales found in the Ordovician period could now really be called sharks.”

From fins to limbs

Another interesting discovery from these fossils concerns how paired limbs in vertebrates first evolved. A new jaw-less fish called Tujiiaspis now shows the primitive condition of paired fins before they separated into pectoral and pelvic fins – the forerunner to arms and legs.

Pectoral fins were thought to have evolved in jawless fishes called osteostracans, then pelvic fins later in placoderms. But the new Tujiiaspis fossil suggests both sets of fins could have evolved at the same time from fin folds that run along the body and end at the tail fin.

When was the first radiation of the jawed fishes?

Finally, all these discoveries reveal that the first great major “radiation” of the jawed vertebrate (which refers to an explosion in diversity) took place much earlier than anyone imagined. Ivan Sansom from the University of Birmingham was a coauthor on one of the papers. As Sansom notes:

“We’ve had hints of older material previously, but the appearance of clearly defined remains from jawed vertebrates so close to the base of the Silurian suggests jawed and jaw-less fish coexisted for longer than previously thought. There is now evidence for an earlier radiation of sharks and other jawed fish in the Ordovician period.”

The four papers have shaken up the evolutionary tree, and new diagrams are showing revised hypotheses of the relationships between living fishes. Zhu Min informed me it will take many years to complete the studies on the new fossils, with several new species not yet having been described in the papers.

We’ll have to wait patiently for the next exciting discoveries to be announced from these extraordinary fossil sites.

This article was originally published in The Conversation on 28 September 2022. It can be accessed here: https://theconversation.com/a-kung-fu-kick-led-researchers-to-the-worlds-oldest-complete-fish-fossils-heres-what-they-found-190749

Prof John Long researches the early evolution of vertebrates in order to unravel the stages of how the modern vertebrate body plan evolved.
Many parts of our human anatomy had their origins back in the Early Palaeozoic (540-350 million years ago) in fishes. This was when jaws, teeth, paired limbs, ossified brain-cases, intromittent genital organs, chambered hearts and paired lungs all first appeared.