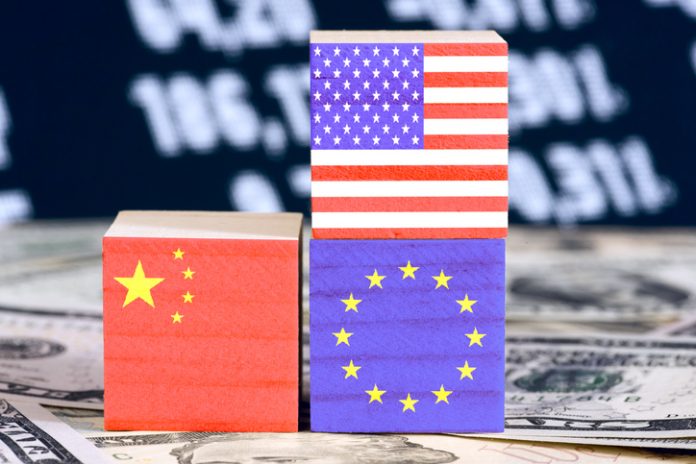 The Australian government desperately hopes this week’s AUSMIN meetings between Australian and US officials will see greater practical American support being delivered in the face of ongoing trade strikes by China.

Reports confirm that measures to combat Chinese economic coercion will be discussed at the meetings between Foreign Minister Marise Payne, Defence Minister Peter Dutton and their American counterparts.

This desire is readily understood: China’s US$14.7 trillion (A$20 trillion) economy towers over Australia’s at $US1.3 trillion (A$1.7 trillion). And since May 2020, China has blocked or disrupted around a dozen Australian exports, including beef, wine, barley and coal. Previously, sales of these goods to China had been worth more than A$20 billion per year.

Yet, there is good reason to question whether repurposing the ANZUS security alliance to tackle economic issues — and working ever more closely with Washington on initiatives aimed at Beijing — represents a coherent strategy for Canberra to get what it wants.

In 2017, the leading Australian foreign policy practitioner, Allan Gyngell, wrote that the animating force behind Australia’s foreign policy has long been a “fear of abandonment” by a “great and powerful friend” – first the United Kingdom, and since the ANZUS treaty was signed in 1951, the US.

The US has consistently signalled its support for Australia in its trade dispute with China — at least, rhetorically.

Late last year, Jake Sullivan, the new national security adviser in the Biden administration, declared the US stood “shoulder to shoulder” with Australia.

The Australian people have made great sacrifices to protect freedom and democracy around the world. As we have for a century, America will stand shoulder to shoulder with our ally Australia and rally fellow democracies to advance our shared security, prosperity, and values.

Then, in March, Kurt Campbell, President Joe Biden’s “Indo-Pacific czar”, assured Australian media the US was “not going to leave Australia alone on the field”. This message was repeated in May by Secretary of State Antony Blinken.

Yet, when Trade Minister Dan Tehan went to Washington in July, he received a more tepid message regarding Australia’s stoush with China.

Katherine Tai, the US trade representative, was only prepared to say the US is “closely monitoring the trade situation between Australia and China” and she “welcomed continuing senior-level discussion”.

“AUSMIN as the ‘icing on the cake’: Alliance management – a history in pictures: In a game of diplomatic spot-the-difference, a sense
of continuity is evident at recent AUSMIN meetings”, says @danielflitton https://t.co/wxtMAFR6l0

The US is not always a reliable partner

What has been particularly jarring isn’t just that the Biden administration has stopped at rhetoric, without offering any material support to Canberra. Rather, it has persisted with choices that actively hurt Australia.

One example is a continuation of the tariffs the Trump administration unilaterally imposed on Chinese imports, which were subsequently assessed by the World Trade Organisation as being inconsistent with international rules.

The US then appealed the decision, which effectively ended China’s legal challenge to the WTO. This was because the Obama, Trump and Biden administrations have blocked the appointment of new judges to the WTO’s appeals body as the terms of serving judges expired.

As a result, the body was left completely paralysed in November 2020. Last month, the US rejected a proposal from 121 other WTO members to have it restored.

Lacking the sheer power of the US or China, Australia relies on global adherence to WTO rules to protect its trade interests. But the US actions mean the rules can no longer be enforced.

Another example is Tai’s insistence in February that China “needs to deliver” on the bilateral trade deal that Washington pressured Beijing into signing in January 2020.

This granted American producers favourable access to the Chinese market compared with their Australian competitors. It also served as another demonstration to China that big countries are able to use their power to coerce others.

The China Daily, a Communist Party mouthpiece, said China remained open to trade cooperation with other countries, including Australia. However, it accused Canberra of blindly following the US. https://t.co/7vHSfquxFH

Australia still likely to double down on US support

That US support for Australia hasn’t gone beyond rhetoric is in a sense not surprising. To do so would involve a political or economic cost to the US. The bilateral trade deal it struck with China, for example, benefits American producers.

But as Gyngell’s analysis suggests, tepid US support to date is more likely to prompt Australia to double down on its efforts to seek more US help.

He proposed a “regular strategic economic dialogue” — an extension of AUSMIN talks that cover defence and foreign affairs – between key senior US and Australian economic and trade officials.

The American response to the proposal was reportedly “non-committal”.

Nonetheless, a new report commissioned by the United States Studies Centre at the University of Sydney backed Morrison’s call and advocated an alliance response to China’s trade strikes on Australia.

AUSMIN 2021 is fast approaching and economic coercion in the Indo-Pacific is high on the priority list. @limdarrenj @ZackCooper & @afeng79 have provided an essential playbook on geoeconomics for Australia and the US at this critical time.https://t.co/iaFsIJdOl4#Alliance70

Reasons to be concerned about an economic ‘alliance’

There’s nothing wrong with an economic dialogue with Washington. But there’s two important considerations for Canberra to reflect on.

First, the pain that Beijing has been able to inflict on the Australian economy by disrupting exports has been limited.

A new analysis by the Australia-China Relations Institute looked at 12 goods that were disrupted by China’s economic coercive actions — everything from barley to rock lobster. And it found that for nine of those 12 goods, the cost incurred by Australian exporters has been less than 10% of the total export value.

The analysis also found that in the first half of 2021, the value of Australia’s overall goods exports to China was actually 37% higher than the previous record set in 2019.

What this means is that China’s trade strikes are nowhere close to being an existential crisis. The Australian economy can weather the storm, with or without US support.

Second, what Australia wants most is for China to follow global trade rules and for these rules to be updated and extended to cover more activities, like government subsidies for agriculture and fisheries.

But the ANZUS alliance is ill-equipped to deliver on this. It has no legitimacy in setting or enforcing global trade rules. And the US has a poor record of following the existing WTO rules itself.

Further complicating matters, the US has designated China as a “strategic competitor” since 2017.

“that does not automatically make it the strategic competitor of Australia.”

The more the idea of an “economic alliance” with the US on par with its security alliance is embraced, the greater the danger of Australia getting bogged down with the US in a “forever war” against its largest trading partner — in this case, spilling treasure rather than blood.

Alternatively, the US might cut another bilateral trade deal with China, leaving Australia on the sidelines again.

If the Australian foreign and defence ministers emerge from this week’s AUSMIN meetings empty-handed on the economic front, the public might, in time, consider itself lucky.

James Laurenceson is Director and Professor at the Australia-China Relations Institute (UTS), University of Technology, Sydney. He has previously held appointments at the University of Queensland, Shandong University (China) and Shimonoseki City University (Japan).