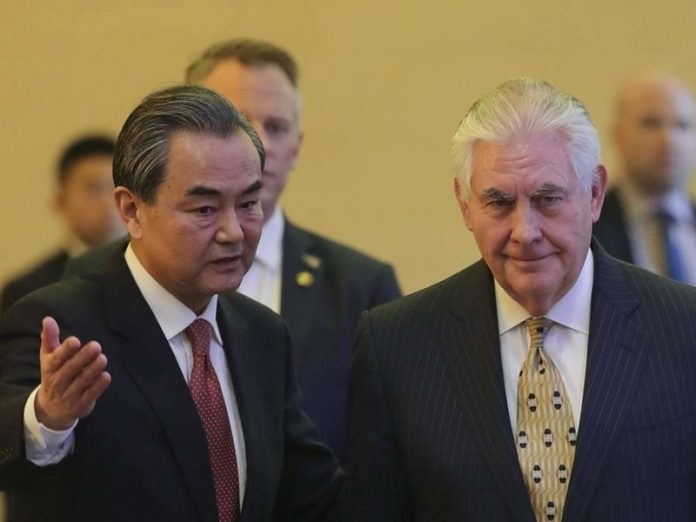 Chandran Nair says Asian nations cannot be mere bystanders or slavish US allies as Washington’s self-serving strategies worsen the prospects for regional peace, and new options can start with an all-Asian alternative to the six-party talks.

Foreign Minister Wang Yi and visiting US Secretary of State Rex Tillerson arrive for a joint press conference in Beijing on March 18. Wang urged the US to be “cool-headed” over North Korea after Tillerson said tensions were at “dangerous levels” over Pyongyang’s nuclear programme. Photo: Reuters

Three months ago, Rex Tillerson was CEO of a global oil giant with a mixed reputation on global issues such as climate change and the environment. Today, he is the top American diplomat, working for a president whose foreign policy approach, as a New York Times editorial put it, “has rattled the world” and, as the Financial Times described it, “scares a lot of people witless”.

So what are we to make of the statement in Seoul last week by Tillerson – a foreign policy novice – that diplomacy with North Korea has “failed”? Well, who in effect calls the shots in the six-party talks and whose very presence has always been a red rag to a bull for the North Koreans? The Americans.

It is not so much diplomacy that has failed over the past two decades but, rather, the application of the same old intransigent US strategies that failed in Eastern Europe – antagonising Russia – and the Middle East. These are strategies that made the situations worse in those regions.

And now, during his first trip to the Asian region, Tillerson was so self-assured as to warn us that all options were on the table, including a unilateral military strike. This is perhaps the definition of undiplomatic for a first-time diplomat visiting an unfamiliar region where there is a need for calm diplomacy, not the ratcheting up of tensions by a non-regional power. This is something he had been reminded of by the Chinese since arriving in Beijing, where he did not repeat his threats.
It is time the region deployed an ‘Asian diplomacy’, devoid of threats and bullying, to solve its challenges.

A cursory understanding of international law should make it clear that a pre-emptive strike would be illegal, and any military action would require UN Security Council approval, which is very unlikely.

As Foreign Minister Wang Yi (王毅) said in a recent statement: the situation is akin to “two accelerating trains” on a collision course.

What is telling is that the US has not learnt any lessons from the disasters in Iraq and Libya. Yet the world remains silent as a new US administration sets the scene for more dangerous adventures.

It is high time for Asian nations to stop being bystanders to a potential train wreck and allowing the future peace and prosperity of the region to be shaped by foreign powers unlikely to bear the true pain of a regional conflict. We in Asia cannot allow a belligerent US led by a temperamental billionaire and his cohort of rich friends to determine our future. This is an intolerable situation and would even be laughable, if not for the fact that it is a serious threat to global peace.
It is time the region deployed an “Asian diplomacy”, devoid of threats and bullying, to solve its challenges. It cannot allow Western disdain for the methods used in the region, rooted in its culture, traditions and deep appreciation of its history, to stop it from acting in its interests. The region needs to create an alternative to the six-party talks and explore other options that allow Asian-style diplomacy to work. It should consider excluding the US, with its proven inability to function in complex regions mainly because so much of its foreign policy is shaped by its toxic domestic politics. This has led to inexperienced political appointees with odd views of the world serving as US diplomats and ignoring the advice of career diplomats in the State Department. This was true of the George W. Bush administration as well. A more effective approach would be to assemble a world-class group of diplomats from within the immediate region.

Japan and South Korea would have a key role. Both need to stop acting as if they do not have a foreign policy independent of the United States and instead form a strong neighbourly alliance that seeks to work with China. This will require all three parties to once and for all patch up their historical grievances, which have allowed the region to be “divided and ruled” by non-regional powers like the US.

Asia cannot be held hostage by a South Korea and Japan that remain so wedded to US foreign policy.

If they are unable to work together, then the other nations of the region will need to take the initiative, as the issue of North Korea will affect all of Asia – which cannot be held hostage by a South Korea and Japan that remain so wedded to US foreign policy.

While South Korea certainly has grounds to be concerned over the actions of the North, its security is not helped by its aligning itself solely with the US and allowing the latter to flex military might in its territory. This not only infuriates the North but also the Chinese and Russians, important members of the six-party talks.

This is the moment for the region to stop being led by the self-serving agenda of the US and other Western powers which have also created a belief that Asian diplomacy is somehow inferior (because it does not follow Western norms) and that the diplomatic capabilities in the region are weak.

This cannot be further from the truth. We surely do not need any further evidence that the American political system is broken and, as a result, has dangerous implications for the world if Asia remains subservient to its unreliable leaders with naive and dangerous policies.

This article was first published at scmp.com and is reprinted with permission.

Chandran Nair is the founder of the Global Institute for Tomorrow and member of the Club of Rome. He is also the author of The Sustainable State: The Future of Government, Economy and Society.