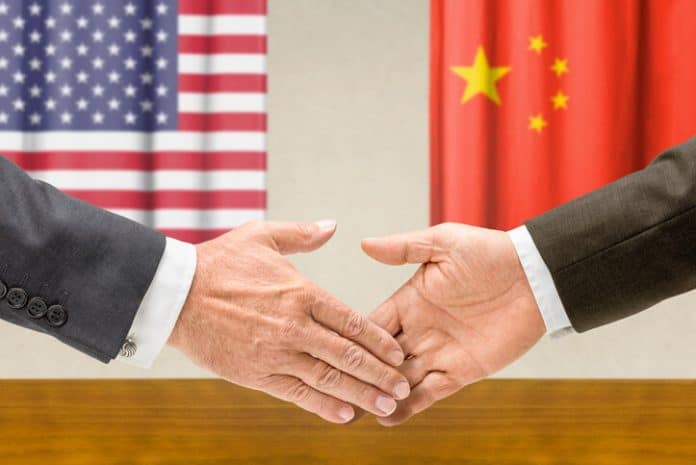 A week out from the COP26 climate negotiations in Glasgow, all eyes are on two nations: China and the United States. Together, the superpowers are responsible for more than 40% of global carbon emissions. US-China relations have been fractious in recent years, and whether they can cooperate on climate action is crucial to success at COP26 and beyond.

US progress on climate change went backwards under the Trump administration, but President Joe Biden has brought the nation back to the table. Biden wants to cooperate with China in this critical policy sphere, raising hopes of a less adversarial bilateral relationship.

Throughout 2021, however, US-China relations have become increasingly strained. And China’s cooperation at COP26 is far from guaranteed – President Xi Jinping is reportedly unlikely to attend the negotiations.

Together, China and the US could supercharge global progress on climate action. But if they fail to cooperate, the two nations risk a race to the bottom on climate change – with dire consequences for all.

China currently accounts for 28% of global carbon emissions. While its emissions rose rapidly during the 2000s and a good part of 2010s, emissions growth has slowed in recent years thanks to dedicated government efforts to improve energy security and promote renewable energy.

China made its first international commitments on climate change at the 2015 Paris climate talks, including a pledge for carbon emissions to peak by around 2030.

In 2017, US President Donald Trump pledged to withdraw from the Paris Agreement, giving China the chance to take the global leadership mantle on climate action. It looked like China might assume this role when, last year, it pledged to become carbon-neutral by 2060.

China is on track to achieve its 2030 renewable energy and carbon intensity targets. But the target is considered inconsistent with the global goal of limiting warming to 1.5℃ this century.

In the US, Biden has pledged to reverse the climate policy damage wrought by the Trump presidency. He will pursue ambitious national initiatives and international cooperation, including with China.

In April this year, Biden sent US Climate Envoy John Kerry to China to discuss collective climate action. During the visit, the two countries released a joint statement declaring a commitment to cooperation.

This statement implied China would withhold cooperation on climate change until the US gave ground on broader strategic issues. Examples include the US relaxing its stance on:

But as ever, the relationship is complex. Shortly after Kerry’s visit to China, presidents Biden and Xi spoke on the phone covering topics including climate change. Two weeks later, Xi announced China will no longer build new coal-fired power projects abroad.

But we cannot deduce from this announcement that China has decided to cooperate with the US on climate. China has been scaling back its financing of coal-fired power stations abroad for years.

Fork in the road

Cooperation between China and the US will remain highly unpredictable. The key question is whether competition between the two nations on climate action will be constructive or destructive.

Under a constructive scenario, the US and China would compete to ramp up their investments in clean energy, advance their technological capabilities and build internationally competitive industries. They would also compete to help emerging countries reduce their emissions.

China and the US would both seek to prove the superiority of their respective governance models by making rapid progress on climate change. In other words, does China’s party-state, quasi-Communist model offer the most desirable path forward? Or is the US model of democratic capitalism the better option?

By contrast, destructive competition between the US and China would have dire consequences for the climate. First, it would make the international flow and diffusion of green technologies difficult.

With a reduced market size, new climate technologies and products would then take longer to become affordable, slowing their global uptake.

Second, an effective system for global climate governance requires most nations, if not all, to participate. Yet, without trust between the US and China, such a system would be untenable.

Finally, the domestic climate actions of both the US and China may be adversely affected if tension between the two countries intensifies.

In the US, hawkish politicians and media would likely denigrate the administration’s position on climate change as its political weakness when dealing with China.

The Chinese ruling party would likely face rising nationalist sentiment against further climate actions which would be viewed as caving in to US demands. This nationalist view has long argued that the West presses China on climate actions simply to hold back the country’s development.

How the US and China act and react on climate issues will continue to be of supreme importance, at COP26 and beyond. But it’s the long-term competitive dynamics between the two countries that will fundamentally determine global climate action.

Hao Tan is Associate Professor with the Newcastle Business School, University of Newcastle. Professor Hao Tan’s current research interest is in China’s energy and resource transitions and thier global implications from a management research perspective. Since 2009, he has published over 30 scholarly journal articles and book chapters, including two major commentary articles in the leading science journal ‘Nature’ (co-authored with Prof. John Mathews from Macquarie University). He is also a frequent contributor to both English- and Chinese-language media outlets on management and policy issues in relation to energy transitions.

Elizabeth Thurbon is a Scientia Associate Professor in International Relations in the School of Social Sciences, UNSW Sydney.

John A. Mathews is Professor Emeritus in the Macquarie Business School at Macquarie University, Sydney. He has taught graduate MBA classes for the past two decades and more.

From 2009 to 2012 he was concurrently Eni Chair of Competitive Dynamics and Global Strategy at LUISS Guido Carli University, in Rome, where he taught Masters’ and doctoral level courses in the Economics and Management of the Energy Business. He was the first appointment to this new Chair.

Professor Mathews’ research has increasingly focused for the past decade on the inter-related topics of the global transformation of energy systems and the shift to renewable energies, the move from a linear to a circular economy, and the role of green finance — with China as a lead player in all three. He published a Commentary article on this topic with collaborator Dr Hao Tan in Nature, on Sep 11 2014: http://www.nature.com/news/economics-manufacture-renewables-to-build-energy-security-1.15847

His book “Greening of Capitalism: How Asia is driving the Next Great Transformation” elaborates on these themes. It was published in November 2014 by Stanford University Press: http://www.sup.org/book.cgi?id=24288

His most recent book “Global Green Shift: When CERES Meets Gaia” (Anthem Press, London, 2017) takes green issues beyond energy and materials to examine the greening of water and food supplies and their intersection with urbanization. He blogs at this book’s webpage: https://www.globalgreenshift.org/blog-1
For this book and for his wider work on industrial dynamics Professor Mathews was awarded the International Schumpeter Prize in 2018.

Sung-Young Kim (김성용) is a political scientist currently leading a project on ‘The Sources of Competitive Advantage in Exporting Green Energy Systems’, which examines why, what and how East Asian governments and corporations are promoting new smart grid technologies. He is also currently one of four Chief Investigators on an Australia Research Council Discovery Project (ARC DP) ‘East Asia’s clean energy shift: enablers, obstacles, outcomes and lessons’ (2019-2021), which focuses on South Korea and China’s green growth initiatives.