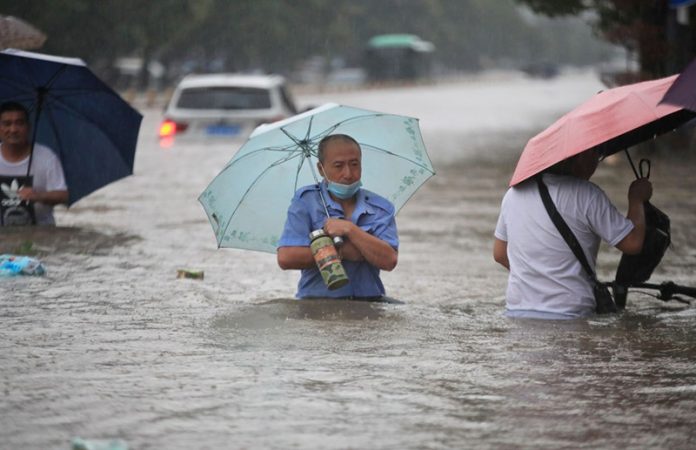 The economic impact of extreme flooding and the Delta variant may prove significant in certain regions but marginal nationwide. Preemption will be costlier nationwide.

After mid-July, China’s Henan province suffered severe flooding, caused by a period of prolonged heavy rainfall. Zhengzhou, the provincial capital of about 12 million people, was hit by a record-breaking maximum rainfall of 201.9 millimeters in just one hour.

On July 20, the first case of the Delta variant was confirmed at Nanjing Lukou International Airport. By the end of the month, almost 300 cumulative cases had been reported.

Until recently, China’s economic recovery has been spectacular. But could “once-in-a-century” weather events and novel coronavirus variants undermine it?

By August 2, over 300 people had died and 50 were still missing following Henan downpours and flooding. While resident evacuations peaked at 1.5 million, 934,000 have been relocated and some 10 million people affected.

That same day, the State Council set up a task force to comprehensively investigate the disaster response. The results will be vital for Zhengzhou and Henan but also for other Chinese cities and provinces that will face extreme climate events in the future.

What amplifies the economic impact is the role of Zhengzhou as the junction for major north-south and east-west high-speed rail lines, with connections to most major Chinese cities. In addition to heavy casualties, property losses have been high in the affected areas. According to current estimates, direct economic losses from the rains, floods and inundation amount to $18 billion.

Due to the summer season, power plants were coping with peak summer demand even before the flooding. After flooding, the transport of coal to central and eastern China could be significantly impacted. Floods also tend to have a longer-term impact on farm output. There have also been concerns about disruptions to the operations of multinational corporations, such as Foxconn, Nissan, IKEA and FedEx.

Despite short-term disruptions, the longer-term impact on global supply chains is likely to prove negligible for goods ranging from cars and electronics to coal, pigs and peanuts.

Delta impact depends on the spread and pace of containment

Reportedly, Chinese authorities have contained more than 30 outbreaks; from the southern Guangdong province to the northeastern Liaoning. But in early July, the highly contagious and transmissible Delta variant entered Nanjing, the capital city of Jiangsu province.

After over a dozen cleaners were infected with Covid-19 at Nanjing’s major air hub, more than 20 cities have detected linked cases. Reportedly, the airport cluster resulted from inadequate management and insufficient hygiene and sanitation measures. Two major linked incidents have also been identified in the Hunan province.

Three factors contributed to the regional spread: the high transmissibility of the Delta variant, the peak tourist season and the high-traffic international airport.

Today, the number of confirmed cumulative Covid-19 cases exceeds 200 million, while deaths have soared to 4.3 million. By April, Delta still accounted for less than 5% of all cases worldwide; today, that figure is a stunning 75% of the total.

Despite the regional spread in China, the economic impact could remain marginal, as long as authorities persist in strict prevention and control measures, including testing, contact-tracing and quarantine, and ensuring people continue to wear face masks and maintain social distancing.

The pace of vaccinations should be further intensified. Intra-provincial trips should be delayed or canceled, particularly to and from medium- to high-risk provinces. For this plan to be successful, cooperation of the people is mandatory.

Although the number of Delta variant cases in China is very low compared with the United States and some European countries, preemptive measures are needed to lessen its economic impact. Unfortunately, the greater the demand-side liabilities, the greater the supply-side damage.

Nonetheless, the faster the Delta can be contained, the likelier it will be that the impact will remain regional and that it can be offset in the coming months.

In the first quarter of 2021, Chinese economy expanded by 18.3%, due to the base effect from last year. Strong expansion from last year’s contraction has been prominent in retail sales, industry value added investment, real estate and trade.

Thanks to the spectacular recovery prior to flooding and the Delta, China’s GDP growth was estimated at about 7.5 to 8.0% in 2021 and 5.5% in 2022, due to the dissipating base effect. But could the floods and the Delta variant penalize the macroeconomic performance further?

It would not be surprising if factory activity would expand slightly less quickly in July, due to raw material prices, government policies, seasonal rainfalls and rising COVID cases. These effects could slightly slow and delay economic recovery. But they could also remain largely marginal if new extreme events can be avoided, the Delta impact will prove limited and successive variants can be contained.

Climate change is accelerating the frequency of severe storms, floods, droughts and extreme heat events. According to the UN, the global bill for storm damage in the past half-century is estimated at $521 billion.

“Extreme events” are now a part of the new global landscape. In the long-term, the only viable way to cope with such challenges is rapid acceleration of resilience and sustainability.

A shorter version of the commentary was published by China Daily on August 5, 2021