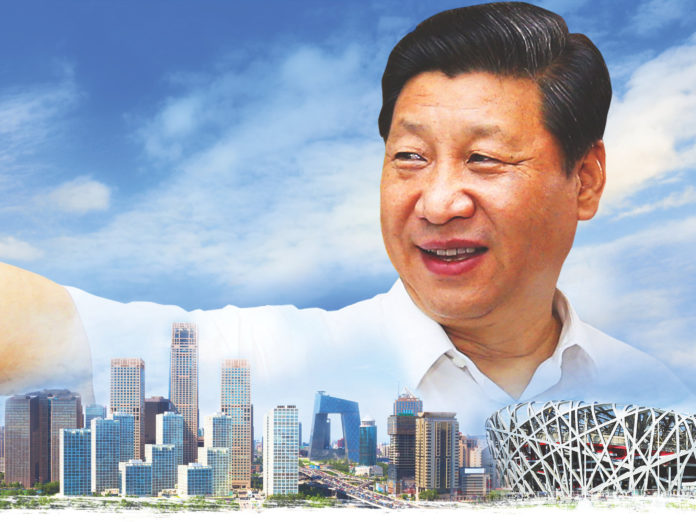 President Xi Jinping fully understands that China’s freedom from Western exploitation, its successful, independent economic and geopolitical policies, and the never ending fight against the West trying to contain and destroy China, all depends on the Communist Party of China governing the country. Xi is reaffirming the Chinese Dream’s communist values of social and economic equality. 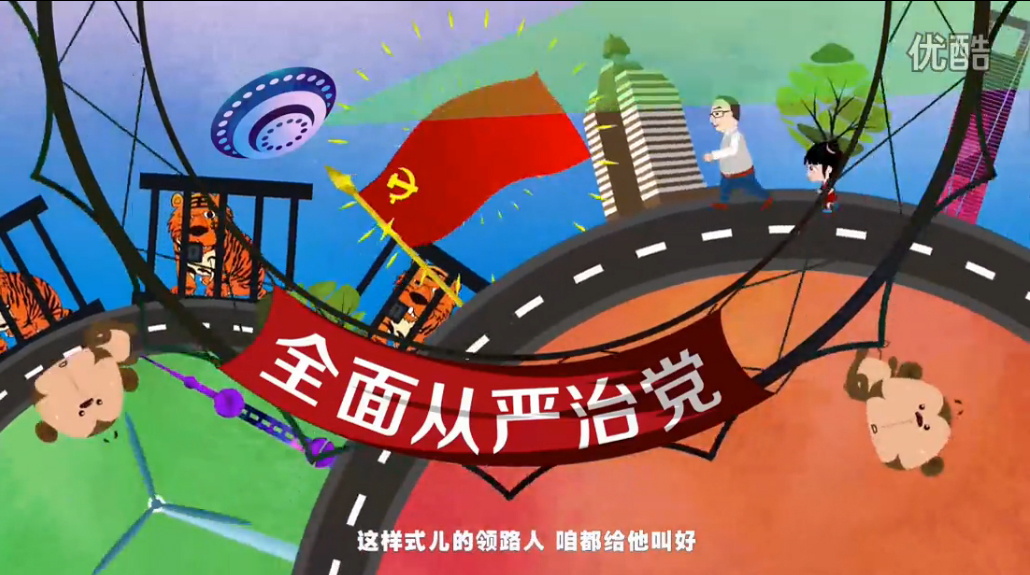 An outtake from Xi Jinping’s cartoon hip hop video. The tigers behind bars refer to the many high level Communist Party of China (CPC) members, who have been thrown in jail for corruption. Monkeys are flying around for the New Year. Shanghai’s CCTV tower and a wind turbine can be seen in a field of ecological green. A spaceship and skyscrapers evoke modernity. The flag of the CPC sparkles, while a banner rolls by saying, “Strictly govern the Communist Party of China”. Every fast changing scene elicits many different, subtle messages, that subconsciously resonate with the Chinese. The two characters, walking the socialist road towards the communist flag are chanting, “For a leader like this, let’s all give him a shout out”! (Image by Xinhuanet)

To usher in the Chinese New Year of the Monkey 2016, Xi Jinping has produced a 3-minute cartoon hip hop video, which has gone viral across the country. Why? Because it announces his presidential platform for the rest of his 10-year term, through 2023:

Xi Jinping and the CPC really understand their citizens and how to communicate Party propaganda to them. Can you think of any Western leader, who would put out cartoon videos like this? Xi has released several of them, all wildly popular with the masses, and having the world’s largest 3G and 4G networks, he and the Party have what marketers call “reach”.

While he released these “Four Comprehensives” a year ago, for Chinese New Year 2015 of the Ram, up to now they have gotten almost zero traction in the national press. They were in the media deep freeze until this week. Xi and the CPC have obviously decided that now is the time to go full Monty, as it were, to the Chinese people. Why? Because last year, a month before Xi’s announcement of his Four Comprehensives, the CPC launched its “12 Virtues of Communism” campaign. Having saturated the country with this, for a year now, it would appear that Xi is ready to take centre stage. It is truly his philosophical legacy for China’s posterity. He also probably wanted more time to reform the CPC and the PLA, before coming out in a big way with a mantra tied directly to his name. He has more than taken care of Party and military affairs, so now, it’s time to step into the people’s limelight.

Jeff J. Brown, author, analyst, lecturer and based in China, has written China Rising – Capitalist Roads, Socialist Destinations (2016) and the geopolitical travelogue, 44 Days Backpacking in China (2013). China Is Communist Dammit! will be published in late 2016 and his historical fiction, Red Letters – The Diaries of Xi Jinping, will be out in 2017.
The views expressed in this article are those of the authors and do not necessarily reflect the views or policies of All China Review.

The Duterte Whirlwind: The Reawakening of the Philippines

How the Uber China vs. Didi Will be Different in 2016