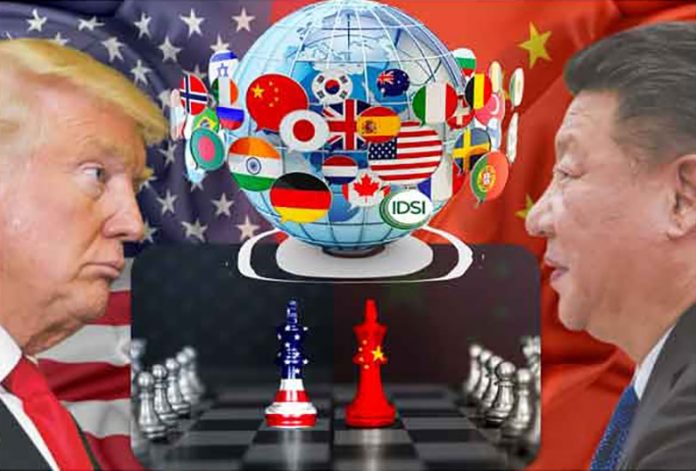 Trump had stated the assumptions he had for initiating the trade war, and what he hoped to achieve. This war  has caused the breaking of many agreements, created much political heat between countries around the world, increased the risk of war, lowered economic growth in the European Union (EU), Japan, China, South Korea, almost everywhere, to the point that recessions are now feared, and the resulting cutting of interest rates are now being interpreted as manipulation of currencies by the ECB, China, etc…since this affects exchange rates, but this is actually also a natural tool for managing domestic economies. A cycle of distrust and accusations is creating nervous tensions that are flowing into the domestic politics of each country as well as inter-country inter-region relations.

How are the BASES OF THE TRADE WAR stacked up?

Trump’s economic ASSUMPTIONs used incomplete data. Last week, we showed that the goods trade deficit of the US with China was huge, but  because it was not adjusted for  US services surpluses and cross sales (over $230 billion a year)  between the countries, which would have shown a much healthier balance and sustainability of aggregate trade between the two giants.

“Rape” or “consensual?” … Given that many US companies freely chose to source manufacturing abroad, and continued to increase orders in China even after the start of the trade war. Many US companies became powerhouses, including Apple, Qualcomm, Intel, Walmart, General Motors, on the back of sourcing and marketing in China, the benefits were mutual.

“Forced transfer of tech” in return for access to markets. There was mutual agreement, it’s “contractual,’ not “forced.” The Philippines itself has experienced negotiating quotas and access to markets, military base access, changes in legislations and tax policies, in return for investments, economic or political benefits.  Asean tariffs were often negotiated on this basis. Based not only for employment generated, but also for promised transfers of technologies or training.

Subsidies? Zones with different rules, taxation allowances, special input prices, exhibition or development supports, rebates, infrastructure support are practiced by practically every country promoting exports. Depends on the degree of support, but  Europe and the United States were the biggest subsidizers of agriculture.  The US government’s subsidies for the space program and other defense contractors were the foundation of the tech innovations and  funds for these companies.

Wage suppression? When China’s wages grew more than 10 times in the last 30 years?

Intellectual property (IP) theft? “Borrowing” was used by every economic power on the way up, including the US, Japan, Taiwan, etc…until they developed their own strengths and categories of innovation.

“IP Theft will solve itself… “As Dr. Henry Chan of NUS points out, China’s R&D is now nearly as large as that of the US,  plus it produces a multiple of the engineers and STEM graduates compared to the US  A copycat at technology can never surpass the originators, so why be afraid of Huawei if they just copy? A country, once it achieves a level of innovation, will become a protector of IP instead of one that uses others’ ideas illicitly.

Who imposes embargoes, restricting the sourcing or sales by other countries,  trade between third countries,? Imposing national laws on the international community.  Military interventions.  Reneging on arrangements that have been agreed upon.  The standards are nothing to preach about if consistency is valued.

What WILL BE, WILL NOT BE ACHIEVED?

Business supply chains will move, some manufacturing will move back to the US, but few jobs will be brought to the US  because Trump already succeeded in increasing employment, few US citizens are interested in making garments or labor intensives, US wages are still high compared to other sources.

TECHNOLOGY will the bigger determinant of job retention or loss than trade. AI and robotics will increase productivity, but blue collar jobs will be lost.

DIVERGENCE  instead of convergence may be the direction of the different sides as to technology standards and ecosystems, possibly of culture.

ALTERNATIVES TO US DOLLAR. Currency, reserve and payment systems will create alternatives since countries will want to lower friction costs of trades and also avoid the control that US exerts on the dollar trading system.

BOTH CHINA AND THE UNITED STATES HAVE TO CHANGE THEIR FUNDAMENTAL PSYCHOLOGIES.

YES, CHINA HAS TO OPEN UP.  A more open access to its markets  with lower tariffs with time frames will allow more benefits to flow to other countries and reduce resentment, creating a larger market for its products as well.  Allowing more foreign investments in areas that are not sensitive, a perceived fair grievance or justice system, one that doesn’t favor the local players, and an improved IP protection system will increase innovations, attracting world-class talents and entrepreneurs. A diversity of people and ideas will improve quality of life immeasurably also.

THE UNITED STATES HAS TO ACCEPT DIRECTION TO MULTIPOLARITY. THE above will not happen by force or threat or insult, although some tough negotiations are all part of the game.  The US can work based on America First, but not apply maximization and confrontation to every issue. It cannot always keep being “exceptionalist,” it has to fit  budgets and enhance value creation, that is people have to start producing more, not just  consume, be entitled, negotiate and find a way out of fixes. Deals should not be broken just because they can be broken.

Tough negotiations by the USA will be good for everyone if we come up with new balance of structural changes that create and disperse more value in the world, considering the environment, not just economics.  THE NEGOTIATIONS CAN END IN POCKETS OF DISASTERS if they become excessively emotional and political. We will probably not have a nuclear holocaust based on the theory of Mutually Assured Destruction, the superpowers will not go to war directly. Proxy wars may be waged like the one in Iraq, Iran, including the Philippines, as what we experienced in World War 2, serving as a buffer between Japan and the US.  We all have to work to convince both sides to keep a distance from the precipice.

The article was first published in The Manila Times.

George Siy is a Wharton-educated industrialist, international trade practitioner and negotiator, serving as director of IDSI. He has been invited as a resource person on economic and development issues by various business organizations, media and the academe. He has advised the Philippines and various organizations in trade negotiations with Asean, Japan and the United States.

How SEO Is Benefiting The E-Commerce Industry