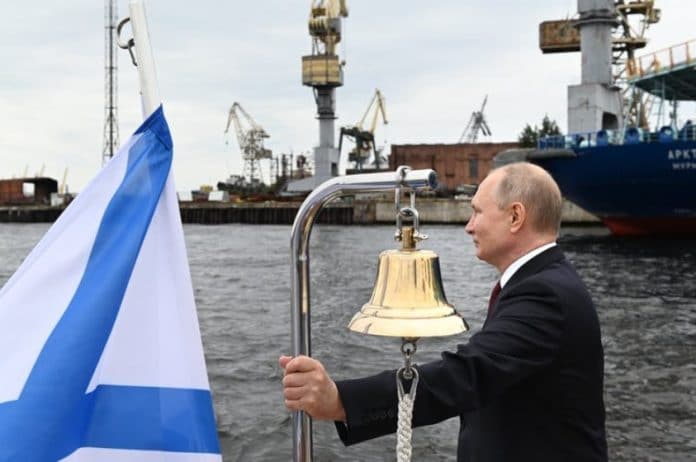 The Russian invasion of Ukraine has confounded everyone. Given its huge economic, reputational and political costs – not to mention the immense human misery it has already caused – how can anyone in their right mind choose to start such a war?

The question of rationality is important when assessing a country’s actions, the likely impact of external pressure on it, including economic sanctions, as well as a potential way out via negotiations.

My research looking at the various style of imperialism in north-east Asia from the end of the 19th century to the mid-20th century has helped me to get a better feel for Vladimir Putin’s motives behind the invasion, which actually follow a coherent pattern.

I began to see the Russian president’s rationale behind a large-scale invasion of Ukraine, from the speech he made on February 22, recognising the two separatists republics in eastern Ukraine. Pronouncements since from both Putin and several Russian officials added further pieces to the puzzle.

The Russian leadership views on Ukraine can be deconstructed into a few basic narratives. These are the claims that certain areas of modern Ukraine are “old age Russian lands” (iskonnye russkie zemli), the idea of historical closeness between the Russians and Ukrainians, and the strategic borders argument.

All of these claims fit a standard toolkit of national appropriation that have been used the world over – from North America to Europe, the Middle East and Asia. But my research has looked at policies of Russia, China and Japan at the turn of the 20th century – and it shows how such claims were used to appropriate territories by different countries across various historical periods.

By looking at the national appropriation of territories in north-east Asia between three competing imperialisms of Russia, Japan and China, we can get a close approximation of how countries with different history, geography and national identities used similar techniques for constructing their national borders.

How new territory is acquired

In a forthcoming research paper, due to be published later this year, I highlight four principal ways of territorial appropriation.

First, it is ethnic colonisation. Settling a new land with people from the home country is seen as a necessary step in claiming it as a national territory. In the case of the Russian far east this took the form of a settler colonisation in the late 19th and early 20th century. Once the majority of people are from the same ethnicity as the mother country, the new territory is claimed as national – not just imperial lands.

Both Japan in its colonisation of Hokkaido and south Karafuto (Sakhalin), and China in Manchuria, claimed those territories as their national lands because the majority of people there were Japanese and Chinese respectively.

Putin’s claim that the Russians and the Ukrainians are one people serves the same aim. It facilitates Moscow’s claims on Ukrainian territories as being essentially Russian and legitimises Russia’s alleged right for a special sphere of influence there – if not an outright annexation.

Second, to strengthen an emotional claim on a territory, the idea of ancestral possession is frequently used. In Russia’s case, claiming common ancestry to the ancient state of “Kievan Rus” as well as a common language and the same Orthodox religion serves as a powerful emotional device for a modern appropriation of territories in independent Ukraine that used to be part of the Russian empire and the Soviet Union.

Third, such claims are often reinforced by cultural and mnemonic links made via literature, culture, and celebration of important historical events. This can include distant past such as the baptism of Rus in 988, or the sieges of Sevastopol in 1854-5 and 1941-2 commemorated in popular culture from Count Tolstoy’s Sevastopol Sketches to a recent film Battle for Sevastopol.

Finally, the strategic borders argument is clearly articulated in Putin’s rhetoric behind the invasion of Ukraine. In both of his speeches on the eve of invasion he talked about the encroachment of Nato via Ukraine towards Russia’s borders as an existential threat. In December 2021, when discussing Ukraine’s military cooperation with Nato, Putin claimed: “We simply have no room to retreat.”

Security is a common argument for control of “strategic” territories. For example, Stalin’s “winter war” against Finland in 1939 was based on a similar premise of the need to move the border away from Leningrad.

Russia’s argument for possession of the Southern Kuril islands, known as the Northern Territories in Japan, is likewise often based on their strategic importance for the control of the Sea of Okhotsk. On the other hand, Japan’s own settlement of those islands and even colonisation of Hokkaido in the second half of the 19th century was often justified as a necessary protection from Russia’s encroachment from the north.

To return to the original question of Putin’s rationality. The lives of many Russians and a far greater number of Ukrainians have been lost. The Russian economy is nearly ruined because of western sanctions. Three decades of painful post-Soviet economic reforms have been undone overnight. For most people this seems crazy.

Yet, the truth is that Putin is following a well-established pattern here. This is not an irrational action but a case of history repeating itself. A great power’s nationalism and obsession with security has overriden any concerns for the economy and wellbeing of its own and neighbouring people.

This article was originally published in The Conversation on 16 March 2022. It can be accessed here: https://theconversation.com/ukraine-putin-isnt-mad-hes-following-a-long-established-great-power-playbook-for-conquest-179410

Alexander Titov – My three main research areas are Russian foreign policy and its links with different interpretations of Russian national identity; history of political thought and national ideologies in the 20th century Europe; and political history in the post-Stalin period for which I am currently working on a new biography of Nikita Khrushchev for Routledge’s ‘Historical Biographies’ series.

I have strong inter-disciplinary background, having read Philosophy and Economics and an MA in Legal and Political Theory at University College London (UCL), followed by a doctoral thesis in Russian history at the School of Slavonic and East European Studies (UCL-SSEES). I worked the University of Birmingham, UCL and Leeds University where I researched and taught various aspects of Russian contemporary history, politics and foreign policy, before arriving to Queen’s University Belfast as Lecturer in Modern European History.