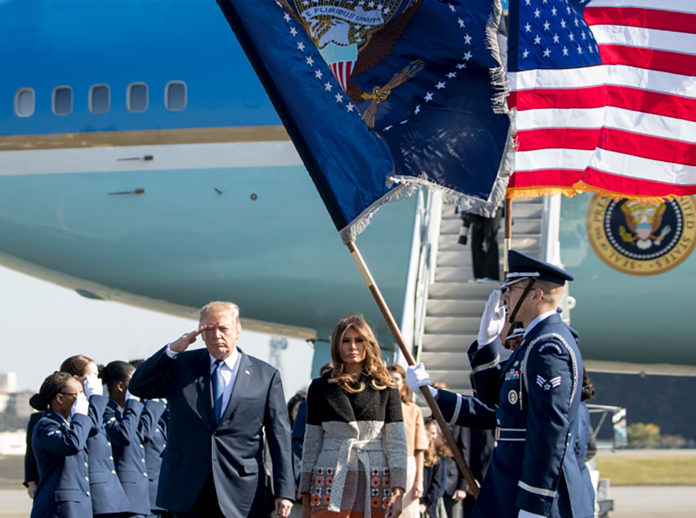 President Trump’s 5-country Asia tour has nothing to do with seeking peace anywhere, it has not even to do with diplomacy – it is entirely a warmongering business trip for the Military Industrial Complex. It is amazing that the world doesn’t catch on.

We know about Obama’s several years of pivoting to Asia. It resulted largely in the TPP, the Transpacific Partnership, a trade agreement between 12 countries including the US. The first thing Trump did when he came on board is cancelling it, claiming that it would only harm the US. Cancelling it, in fact, was a good thing, since contrary to what Trump understands, or claims to understand, of US-made international trade, the Asian partners would have suffered, not the US. There is not one single trade agreement the US has instigated, bilateral or multilateral, where the US came out as a loser, or even as an equal, always a winner. The original meaning of trade is not winning or losing, but it is an exchange of equals with equal benefits for all partners. ALBA (Bolivarian Alliance for the Peoples of Our America) is perhaps one of the few living examples.

Trump doesn’t like multilateral trade agreements, because – even though he is in control – he may not be in total control. He wants to call the shots, every shot. Literally. This is what this 8-day “pivot” to Asia is all about. It is about selling weapons; the best, the most accurate, the deadliest the world has ever produced. Trump’s words – almost. And repeated over-and-over-and-over again.

At a press conference in Tokyo, with Japan’s PM Shinzo Abe, Trump said literally, when pointing at Prime Minister Abe, “[He] will shoot [North Korea’s] missiles out of the sky when he completes the purchase of lots of equipment from the United States. One very important thing is that Prime Minister Abe is going to be purchasing massive amounts of [US-made] military equipment, as he should. We make the best by far… it’s a lot of jobs for us, and a lot of safety for Japan (The Guardian, 6/11/2017).”