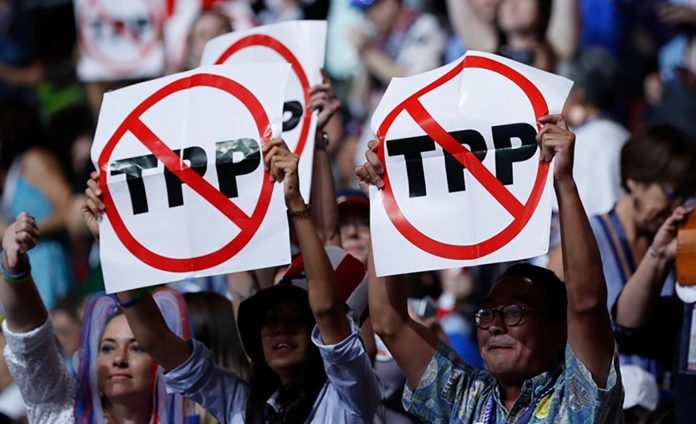 In a video message outlining his policy plans for the first 100 days in the Oval Office, President Trump stated: “I am going to issue a notification of intent to withdraw from TPP, a potential disaster for our country. Instead, we will negotiate fair, bilateral trade deals that bring jobs and industry back on to American shores.” What should we expect to happen next?

The Obama administration was trying hard to seek US congressional ratification this year but it abandoned efforts after the victory of Trump. The TPP faced stiff political opposition cutting across party lines and ideologies. Both the major presidential candidates expressed their opposition to TPP and avowed to reject it once elected. Trump was very vocal in his opposition to TPP as well as NAFTA throughout his campaign. Whereas Hillary Clinton flip-flopped on the TPP pact. While serving as Secretary of State, she had praised TPP as setting the “gold standard in trade agreements” but reversed her position during the presidential campaign due to tough primary challenge from TPP critic Bernie Sanders.

Japan is the only member-country which voted to ratify the TPP deal early January 2017. As per the rules laid out in the TPP, the agreement allows a two-year ratification period in which at least six original member-countries, representing 85 percent of the combined GDP of the grouping, should approve the text for the agreement to be implemented. The US accounts for nearly 60 percent of the grouping’s GDP. With the US announcing its withdrawal, the TPP agreement simply cannot enter into force even if all the remaining 11 member-countries ratify it.

In simple terms, the TPP, in its present form, is effectively dead.

Kavaljit Singh works with Madhyam, a policy research organisation, based in New Delhi. His areas of specialisation include international finance, foreign investments, regulatory affairs and global governance. He is the author of widely published books on international finance and globalisation. His recent book is Fixing Global Finance: A Developing Country Perspective on Global Financial Reforms. He recently co-edited a book on investment treaties titled Rethinking Bilateral Investment Treaties: Critical Issues and Policy Choices. His forthcoming book is on G20 and Global Financial Reforms. He has contributed articles in leading Indian and international newspapers including The Hindu, Bangkok Post and Financial Times.