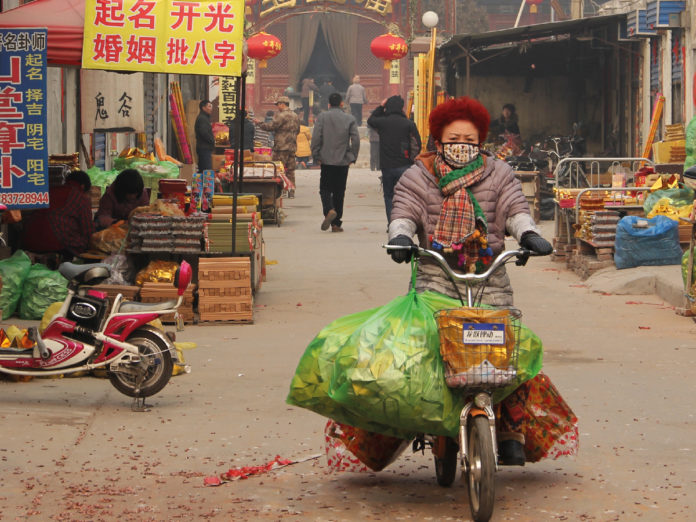 The challenge of improving Asia’s environment has been translated into business opportunities. These range from providing clean, always on, tap-water and sewage treatment to providing renewable energy and energy efficient buildings. It would appear that in the quest for sustainable growth, businesses in Asia are discovering that what is good for the environment is also good for business.

The East is Black. That, at least, is the conventional wisdom of anyone who has seen pictures of Beijing’s shrouded skies, India’s fetid rivers and the steel mills and cement kilns which blanket much of the countryside with a pall of smog.

Sadly, this dystopian image of Asia’s environmental misery is all too accurate. In China alone, 1.2 million people a year die prematurely from air pollution. Skies in some Indian cities are even dirtier. Large parts of the region are in danger of running out of clean water. Clusters of cancer villages testify to the human cost of fast economic development.

If this sounds like an environmental nightmare, it is. Asia is home to 4.3 billion people, six out of every ten people in the world, as well as to some of the fastest -growing economies. What’s been good for economic growth has come at a high cost for the environment.

Asia’s strategy seemed to be summed up as “get dirty, get rich, get clean.”

When the developed world asked developing Asia to accept limits to carbon emissions as part of the Kyoto Protocol, Asia’s response was that the West had had its turn at economic growth and now Asia wanted its chance, too. Forcing Asia to lock in ceilings on carbon emissions, so the thinking in the regions’ capitals went, would be like the West kicking down the ladder behind it, denying Asia the chance to climb the rungs of economic development. 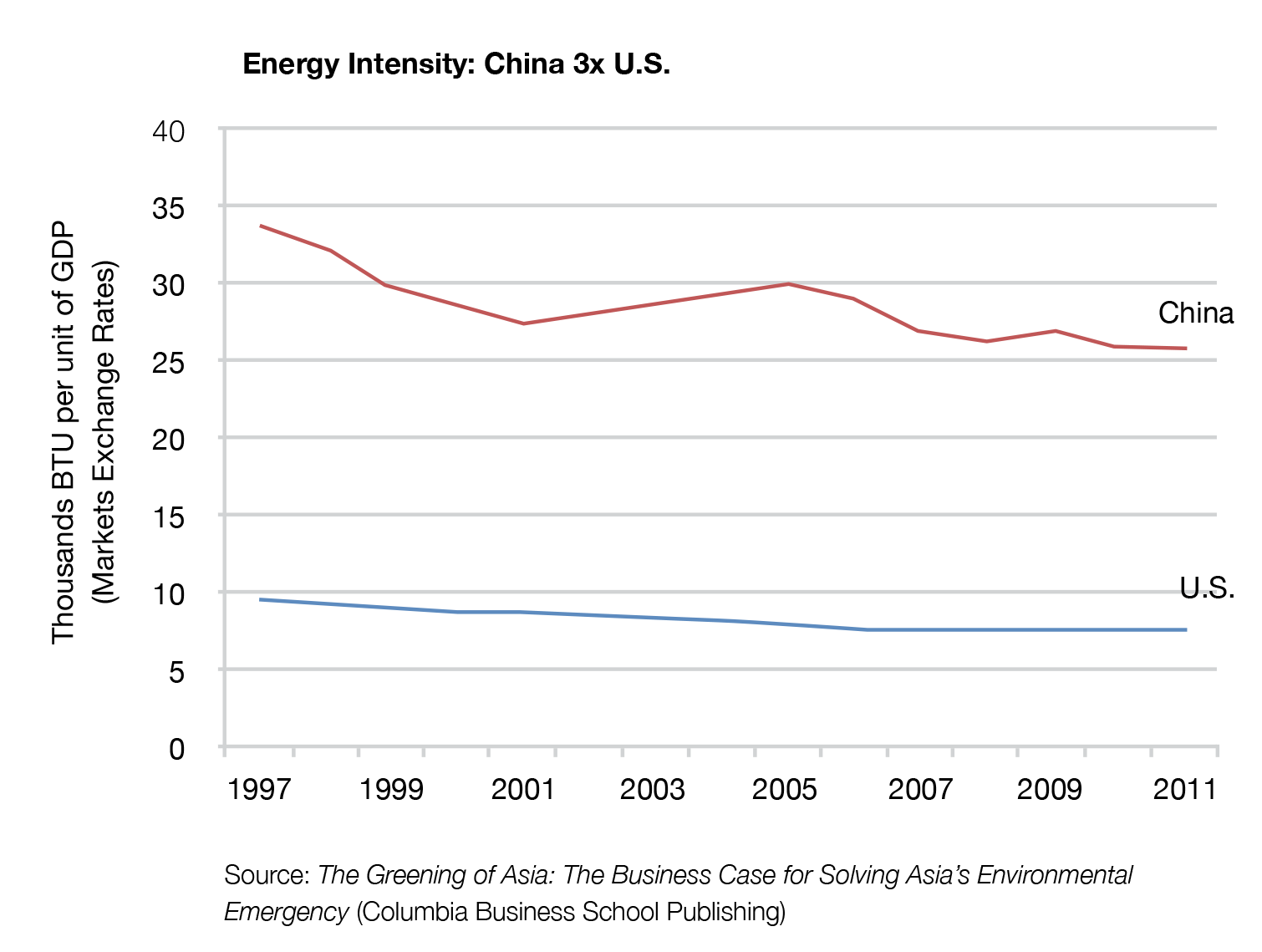 Now the “get dirty, get rich, get clean” strategy, idea that a country can only afford to clean up once it is rich is starting to look badly out of date. The problems, from cancer cluster villages and deaths from air pollution, are becoming politically difficult to justify from populations that are becoming richer and more assertive about their health – and that of their children. Chinese journalist Chai Jing’s documentary ‘Under the dome’, about air pollution in China, generated over 200 million views in the two weeks in March that the authorities allowed it on Chinese website, testament to the depth of public concern.

At the same time, hard physical constraints are putting pressure on governments. Access to safe drinking water is emerging as a potential “hard-stop” issue in parts of Asia. Northern China has only as much water per head as Saudi Arabia. The more severe weather associated with global warming is forcing the Philippines and others to invest in a variety of mitigation measures, including better watershed management.

Change is on the way. In the absence of a follow-on agreement to the Kyoto Protocol, which attempted to limit greenhouse gas emissions, countries are trying up their own environmental and climate action plans. Singapore and Japan are among Asia’s leaders in this regard. China has adopted targets that will see about 20 percent of its energy come from non-fossil-fuel sources by 2030. Coal use in China should peak before 2030 – although experts say that a combination of a tax on carbon and continued support for renewable energy could bring forward the peak on coal use to around 2020.

The rapid growth of solar and wind power, especially in China, reflects a dramatic decline in prices as well as stepped-up government support for domestic installations, [see charts]. This renewed commitment to renewables is also present in Japan, where the reliance on nuclear power has been re-thought in the wake of the 2011 Fukushima disaster. Despite a significant increase in solar power Japan’s policy remains uncertain, as the country’s energy policies are subject to intense political wrangling. 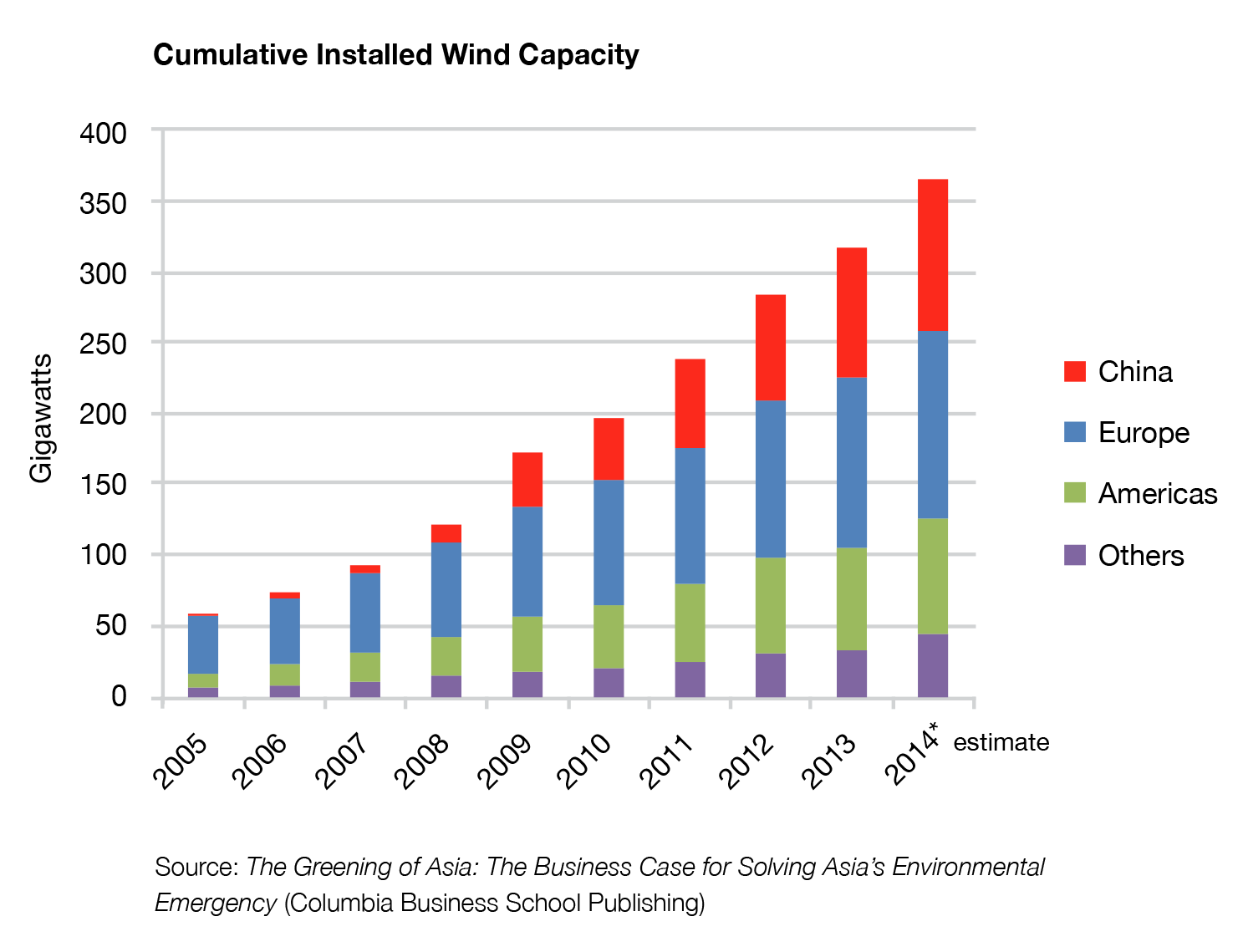 The city-state of Singapore is an excellent example of a public-private partnership to bring about a greener city. The country’s five million people live in a territory smaller than New York City. Long reliant on Malaysia for water, today it is largely self-reliant as a result of desalination plants and sophisticated water harvesting techniques, reservoirs and water treatment facilities. The tropical country has launched plans that will ensure most of its buildings are far more energy-efficient by 2030.

The rapid growth of solar and wind power, especially in China, reflects a dramatic decline in prices as well as stepped-up government support for domestic installations.

Public opinion is also proving to be a powerful motivator for change. Asia’s often aggressive newspapers, TV and, above all, social media commentators, can be unforgiving toward companies that cross the line of what’s acceptable in terms of environmental practices. Large companies can be particularly vulnerable. Many leading companies, some of whom have been around for a century or more, have a genuine desire both to do the right thing and to be seen doing the right thing. Major Asian corporations, which remain the employer of first choice for many graduates, use environmental effort as one way to burnish their standing, both among employees and in the larger community.

Unlike the Silicon Valley-style entrepreneurial culture of the West, large companies typically lead the way in Asia clean-tech, as in so many other areas of the economy. Large companies tend to have the most talented people as well as access to financial resources and technical know-how.

The challenge of improving Asia’s environment has been translated into business opportunities. These range from providing clean, always on, tap-water and sewage treatment to providing renewable energy in the form of solar and wind power. Solar and wind power prices have fallen sharply in the past decade. In Japan, leasing giant Orix is one of many corporations that, prompted by government support for solar power in the wake of the 2011 Fukushima disaster, decided to use its balance sheet to fund an expansion into clean energy ranging. Green buildings are another promising area. Property developers that build more energy-efficient buildings often find that profits increase as a result of higher rents and sales prices as well as ongoing energy savings.

This competitive advantage of environmentally conscious companies is likely to increase. Fundamental resources such as water and carbon are now underpriced. Companies that are using water more efficiently and moving to less carbon-intensive modes of production, will increase over time as these resources are priced more accurately. Textile giant Esquel is one example. The company makes more than 100 million men’s dress and polo shirts a year. Based in Hong Kong, it is one of the largest vertically integrated shirt makers in the world, buying cotton from farmers in remote regions and ginning dyeing and sewing the shirt. Since it started tracking its use of water and energy about a decade ago, profits are up, at a time when many of its competitors have been driven out of business. That, says founder Marjorie Yang, is proof that good environmental policies can make good business sense.

In a continent as large and diverse as Asia it is to be expected that there are many different approaches to sustainability. What works for Singapore might not in China.

Still, there are some basic principles:

1) Government needs to set out clear, measurable long-term policy choices. These must be backed up with short- and medium-term targets. Wherever they can, governments should use prices – market forces. Prices almost always work better than regulations. A carbon tax is better than a carbon-trading scheme. Eliminating subsidies for fossil fuel is a good place to start.

3) Public opinion has an important role. A vibrant civil society – both environmental groups and media – helps advance change. Civil society ensures that governments and businesses follow through on their promises. 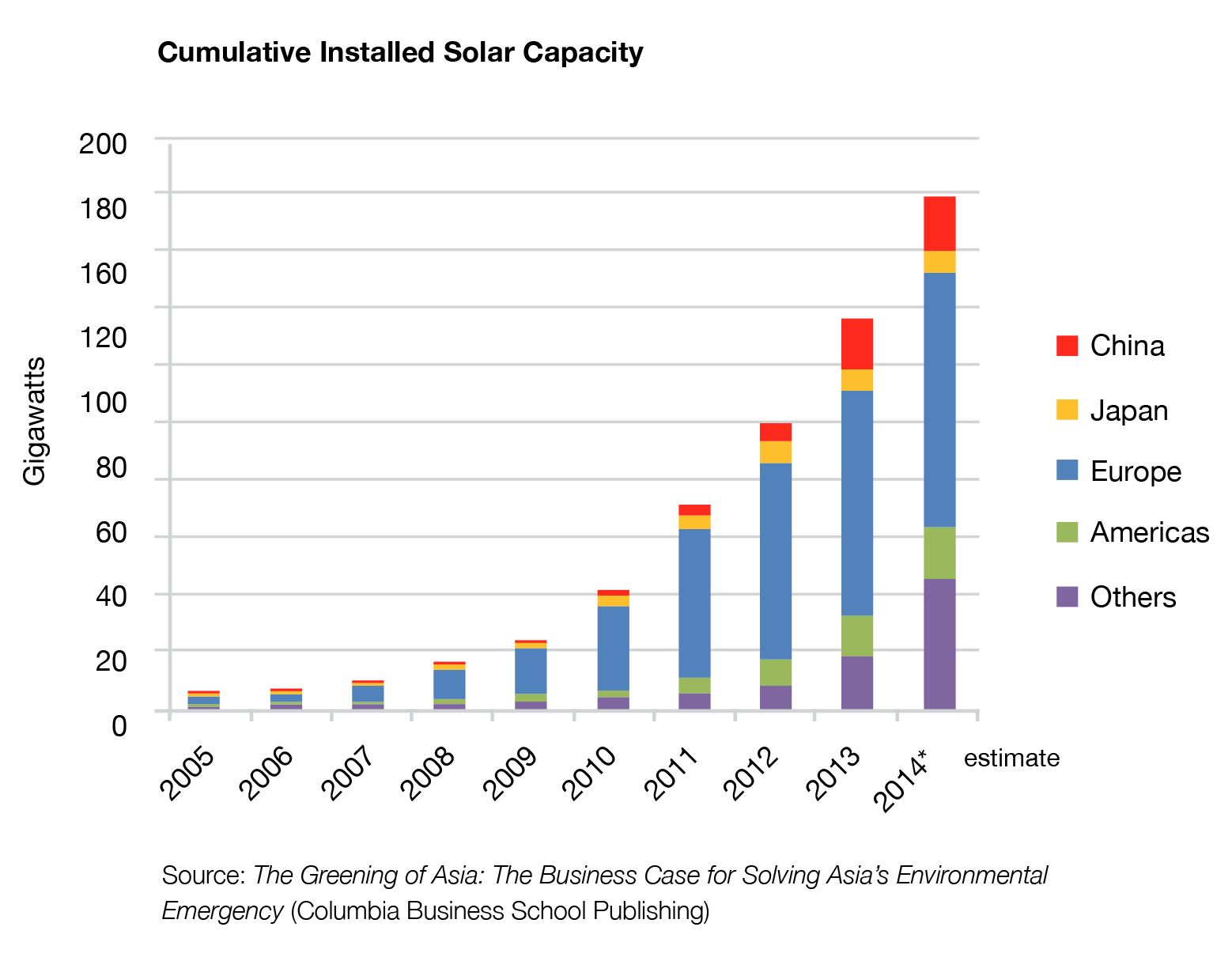 The best way to move forward is in a three-way partnership, where government sets clear and forceful policies, business creates and invests in products and services to help clean up the environmental mess and civil society acts as an arbiter to see that governments and businesses do what they say.

Mark L. Clifford is the executive director of the Hong Kong-based Asia Business Council and the author of The Greening of Asia: The Business Case for Solving Asia’s Environmental Emergency (Columbia Business School Publishing). He was previously editor-in-chief of the South China Morning Post.