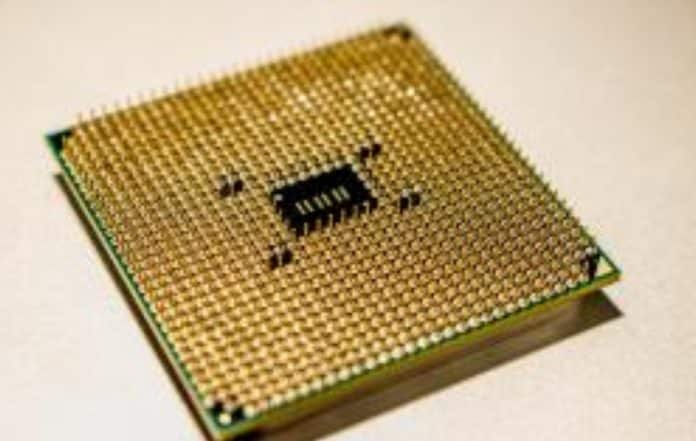 Despite its global clout, the American technology sector is moving from Silicon Valley and innovation to Pentagon and geopolitics. Weaponization rules.

Since the postwar era, American commercial and defense innovation has suffered from long-term structural erosion. In part, this reflects internal constraints; in part, the rise of other innovation nations. Through international cooperation, it could continue to benefit all major innovators. But that’s no longer the goal.

In early 2021, an official report commissioned for the White House and Congress urged the United States and its allies to reject calls for a global ban on autonomous weapons systems powered by artificial intelligence (AI). According to the report, America was “not prepared to defend or compete in the AI era.”

As the authors, ex-Google CEO Eric Schmidt and Pentagon veteran Robert Work, saw it, “by 2025, the Department of Defense and the Intelligence Community must be AI-ready.” It was an ambitious, but aspirational goal.

What the two were really pushing was extensive public AI investment that would be lucrative in private interest, while presumably serving the “national interest.”

Just as the Marshall Plan was once sold to the Congress under the perceived risk of Soviet expansionism, the AI initiative is touted in the name of perceived Chinese aggression: “We must win the AI competition that is intensifying strategic competition with China.” As Schmidt and his co-head Robert Work argued in their 756-page AI report, Chinese innovation must be derailed by weaponizing AI, the next big thing in the information and communication technology (ICT) sector.

A veteran Pentagon insider, Work served as the CEO of the Center for a New American Security (CNAS) in 2013-14 and as a principal in WestExec, which features many CNAS fellows and is vital to the Biden White House. After his stint as US Deputy Secretary of Defense (2014-2017), Work joined the board of Raytheon, the global military contractor.

Critics shunned the AI report. They warned that the proposals risked unleashing a lethal and irresponsible arms race. “This is a shocking and frightening report,” said Prof Noel Sharkey of The Campaign to Stop Killer Robots. “The most senior AI scientists on the planet have warned them about the consequences, and yet they continue. This will lead to grave violations of international law.”

The common denominator of AI and semiconductors is weaponization. What is less well understood is the private profiteering fueling decision-making that used to belong to the White House, the Congress and the Pentagon.

While public focus was on the trade war in 2017, that’s when the Trump administration initiated a broad technology battle against China. When Schmidt stepped down in late 2017 as the executive chair of Alphabet, Google’s parent, he had already overseen the Pentagon’s Defense Innovation Advisory Board for two years, to align Silicon Valley with the Pentagon. Hence, too, Google’s increasing cooperation with the Department of Defense (DoD) and his cumulative interest in targeted advisory positions. These began with a membership of the President’s Council of Advisors on Science and Technology (PCAST), followed by his role as the chair of the PCAST report on semiconductors (2017), Pentagon’s National Security Commission on AI and its final report (NSCAI, 2018—21).

In mid-September, his own Special Competitive Studies Project (SCSP) a private spinout from the NSCAI, released still another report on how to exploit technology to undermine China, America’s “chief ideological opponent, largest economic competitor, most capable technology peer, and most threatening military rival.”

Known in the past as a financier of the Obama, Clinton and Biden campaigns, Schmidt has increasingly contributed to Republican campaigns. With net worth at $23 billion, he can afford it. Political campaign finance is seed funding of sorts.

In recent years, Schmidt has invested millions of dollars into military start-ups. Meanwhile, the ties between Google, Alphabet, Schmidt, his shares and companies have grown so blurry that a federal court had to order him to turn over records to see whether he has promoted his personal business interests.

Like secretary of foreign affairs Antony Blinken, Flournoy is behind the consulting cash-cow WestExec, which links AFF with the Biden administration. Like AFF which is developing investment schemes with the QUAD security alliance countries, WestExec, has expanded through strategic partnerships in private equity (Pine Island Capital Partners) which used to employ Blinken and secretary of defense Lloyd Austin, venture capital (Ridgeline), management advise (Boston Consulting Group) and PR advisory (Teneo). These partners are profitable but controversial. Yet, WestExec’s hawkish advice is manna from heaven to CNAS’s Big Defense donors, including Northrop Grumman, Boeing, Lockheed Martin, Raytheon, and the US-based Taipei Economic and Cultural Representative Office (TECO).

Like Flournoy, the AFF hopes to cash-in on internationalization. It is developing investment schemes with the Quad security alliance countries. The AFF’s launch was followed by the release of the SCSP report, which promotes America’s global competitiveness in the AI future. The US must win sole global tech leadership by 2025-30. So Chinese innovation must be undermined in microelectronics, AI, and 5G. In each case, Schmidt, in cooperation with Flournoy, hopes to cash in public investments, monopolistic finance, startups, and venture capital partners (Figure 2).

Figure 2 – The WestExec/AFF Combine and their proxies

AI is predicated on the full spectrum dominance of the global ICT sector, which rests on semiconductors. That’s why Schmidt’s semiconductor report urged the US and its allies to “utilize targeted export controls on high-end semiconductor manufacturing equipment … to protect existing technical advantages and slow the advancement of China’s semiconductor industry.” Winning is incapacitating your “adversary.”

The semiconductor debacles first intensified with the US-Japan trade wars of the 1980s. Heavily dependent on the US military, Tokyo agreed to “voluntary export restraints” (VERs) on contested export products, bilateral concessions, sky-high US tariffs, de facto currency revaluation, and structural reforms opening the Japanese market to the US. The concessions cost Japan its mantle as world leader in microchips.

The CHIPS and Science Act of 2022 is portrayed as a $52 billion package aiming to boost semiconductor manufacturing in the United States. But the underlying strategic objective is geopolitical.

Today Asia dominates global semiconductor manufacturing. Though a top exporter, the US semiconductor industry no longer controls supply chains in the global ICT sector. However, it still accounts for over 80% of the world’s chip design equipment, 50% of intellectual property for chip designs, and half of the globe’s chip manufacturing equipment. Today, the US, Taiwan, South Korea and Japan supply most of the world’s semiconductors, whereas China represents the highest demand in the industry. The Biden administration would like to keep it that way (Figure 3).

Reportedly, the CHIPS Act will bar recipients of U.S. government funds from expanding or upgrading their advanced chip capacity in China, which has led South Korean firms to review their Chinese operations. That leaves Taiwan.

Reportedly, Pelosi said she hoped TSMC will side with the US. It wasn’t just a suggestion (Figure 4). 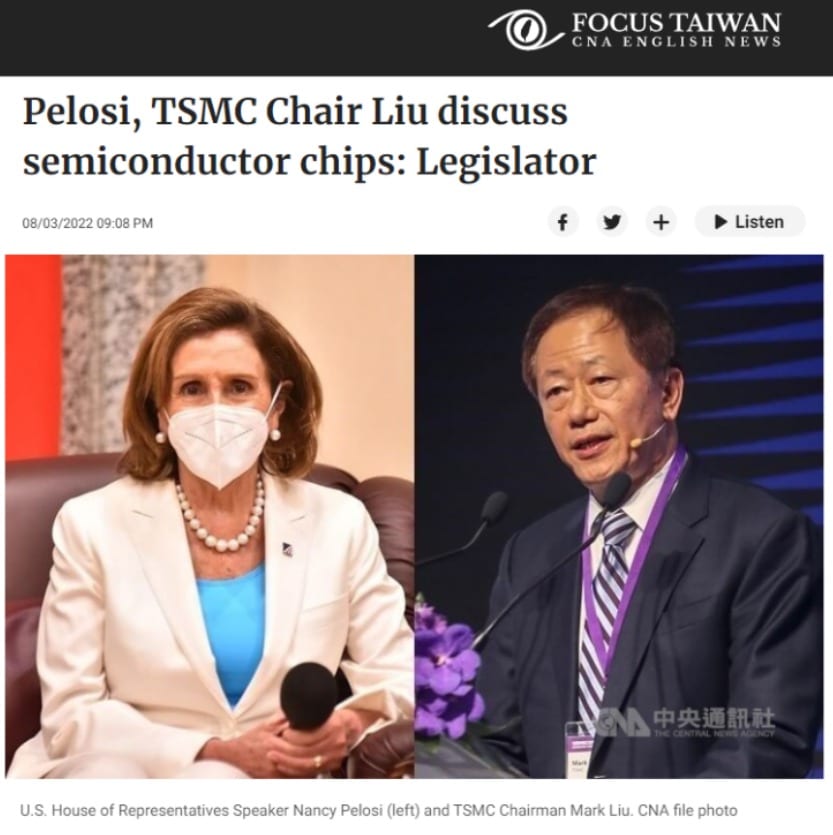 To dominate the semiconductor sector, which enables advanced military technology, the Biden team is pushing reluctant US semiconductor giants to fight China, while trying to use an international chip alliance to “counter” China.

Since no single nation can any longer control entire supply chains in the global ICT sector, weaponization of the semiconductor markets by any one country would be disastrous to the ecosystem. It would replace industry competition with geopolitics, undermine consumer welfare and derail innovation.

This article was originally published in Global Policy on 14 October 2022. It can be accessed here: https://globalpolicyjournal.com/blog/14/10/2022/global-risk-weaponized-tech-sector

Dr. Dan Steinbock is an internationally recognized strategist of the multipolar world and the founder of Difference Group. He has served at the India, China and America Institute (USA), Shanghai Institutes for International Studies (China) and the EU Center (Singapore). On his many books on the global ICT, see his Amazon page. For more, see https://www.differencegroup.net