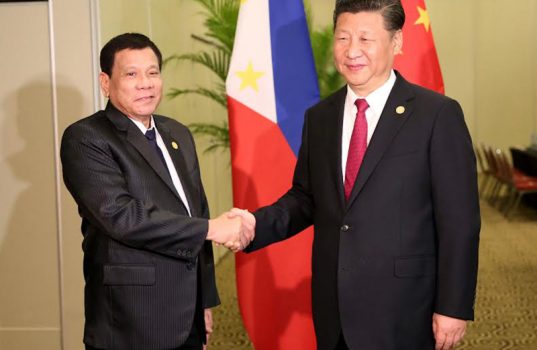 The Pax Americana is outdated and it is time for regional powers to realign.

In the past 30 years, a succession of Southeast Asian leaders was supposed to represent a new direction for regional geopolitics. First there was Malaysia’s Mahathir Mohamad. Then came Thailand’s Thaksin Shinawatra and Susilo Bambang Yudhoyono of Indonesia.

In the end, none were able to revamp the region and its relationship with the world. But Rodrigo Duterte, the Philippines’ new president, may be the first Asian leader to ask the right questions about the future of the region.

He made headlines during a trip to Beijing last month by announcing his country’s “separation” from the US and a coming embrace with China. Then he went to Japan, where he called for American troops to leave the Philippines within two years and assured the Japanese that he was not pursuing a military alliance with China.

Those outside the region have expressed shock at Mr Duterte’s words, and have deemed him naive at best, dangerous at worst. But this reveals an unwillingness to look beyond the western-led order, spearheaded by the US, as the “natural” state of things.

Mr. Duterte is raising questions about who has power, how it is wielded and what self-determination would look like for smaller nations.

Despite his penchant for blunt language, his different tack has already had results. Take the territorial dispute in the South China Sea. The administration of Benigno Aquino, Mr Duterte’s predecessor, rejected any compromise, arguing instead that history and legal precedent meant that it owned islands such as the Scarborough Shoal. China, unsurprisingly, claimed that history and legal precedent supported its own claims.

Chandran Nair is founder and chief executive of The Global Institute for Tomorrow.