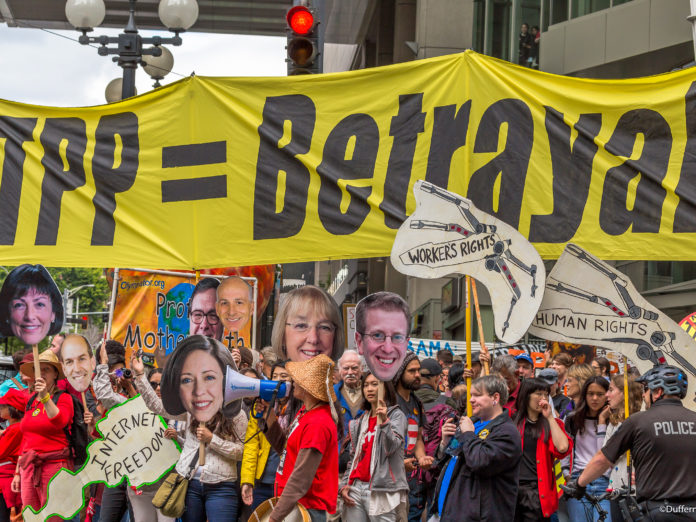 After the Trump triumph, US-led free trade plans are shelved, which leaves China an opportunity to redefine trade in Asia Pacific.

During his campaign, President-elect Donald Trump embraced a protectionist stance on trade issues and called the US-led Trans-Pacific Partnership (TPP) a “disaster.” More recently, he has pledged that the US will quit the TPP on his first day in the White House.

Last weekend, Asia-Pacific Economic Cooperation (APEC) summit, which accounts for almost 60% of global economy, made it clear that they would move forward with trade pacts with or without the US.

After years of cumbersome, secret and contested TPP talks, China is redefining the terms of free trade in Asia Pacific in a matter of days.

The demise of Obama-led TPP

The Trump administration may target NAFTA and other “unfair trade practices” on its first day in power. Trump would like to pull US out of the North American Free Trade Agreement (NAFTA), on the basis of NAFTA article 2205 and US trade code. Or he could target US free-trade agreements (FTAs) to launch more moderate trade deal overhauls.

Nevertheless, since 2010, the Obama administration has led talks for a significantly expanded TPP, which would reflect US alliances in Asia and Latin America but exclude China. These TPP talks were an integral part of Obama’s “pivot to Asia.” In his first 100 days, however, Trump pledges to “reverse decades of policies that have pushed jobs out of the US.” In this view, the current TPP is history.

In his first 100 days, however, Trump pledges to “reverse decades of policies that have pushed jobs out of the US.” In this view, the current TPP is history.

After the US election, some TPP partners – including Japan and Mexico – have sought to push a revised TPP without the US, before Trump can tear up the agreement. A former Mexican trade negotiator Luis de la Calle believes that other TPP members could continue with a modified accord even without the US. Japan’s Prime Minister Shinzo Abe has hedged between a revised TPP, a bilateral free trade deal with the US, and China-led talks at a Regional Comprehensive Economic Partnership (RCEP).

The RCEP reflects the interests of emerging ASEAN, but it has a slower implementation schedule and humbler goals. It includes the ASEAN member states, and their FTA partners (Australia, China, India, Japan, Korea and New Zealand).

Toward free trade in Asia Pacific

Historically, the TPP debacle is a déjà vu all over again in the Americas. In the aftermath of the NAFTA in the early 1990s, Washington sought to extend that agreement with non-trade-related concessions via the Free Trade Agreement of the Americas (FTAA). The effort, which would have split the region crumbled against Brazil’s opposition.

Until the US election, a similar drama was evolving in Asia Pacific where the TTP would have resulted in a set of de facto bilateral agreements to accommodate the great diversity, exemptions and protection of sensitive sectors, including US agriculture.

After the US election, apprehension has spread across Latin America, while the Fed’s impending rate hikes are about to penalize the region. That was evidenced by the recent hits of the Mexican peso, Brazilian real and other Latin American currencies on Trump policy uncertainty. These declines were coupled by the sell-off of Asian currencies.

While US pivot to Asia has stressed military aspects, China’s approach focuses on economic development. Since 2013, President Xi has been promoting commercial ties with Latin America during trips to Mexico, Argentina, Brazil and Venezuela.

Aside from Peru, he now visited Chile and Ecuador, which are both TPP parties. Since 2007, Ecuador’s President Rafael Correa has prioritized closer relations with Beijing, while Chilean Foreign Relations Minister Heraldo Muñoz has said that “protectionism, disbanding and isolation are not solutions to the unrest of citizens.” China’s quest is also seconded by Peruvian President Pedro Pablo Kuczynski who would support an Asia-Pacific trade accord that includes China and Russia if the US pulls out.

From geopolitical divisions to trade integration

Indeed, Beijing’s push for an Asia-Pacific free trade area has been more active since fall 2014 when I predicted that, as a more inclusive and open plan, it had potential to achieve reflect real free trade in the region.

Moreover, the China-led free trade initiative draws from a previous US plan. In 2006, C. Fred Bergsten, the then chief an influential U.S. think-tank, made a forceful statement in favor of the FTAAP, which would represent the largest single liberalization in history.

Oddly enough, the Obama Administration rejected the FTAAP for the geopolitical TPP, which would have imposed an Iron Curtain scenario on Asia Pacific. In contrast, the FTAAP would better serve as a foundation for regional talks.

Ironically, the failure of the exclusive TPP may pave way to truly inclusive free trade in Asia Pacific.

The original, slightly shorter version was published by China Daily on November 22, 2016.

Dan Steinbock is the founder of Difference Group and has served as research director at the India, China and America Institute (USA) and visiting fellow at the Shanghai Institutes for International Studies (China) and the EU Center (Singapore). For more, see http://www.differencegroup.net/

The Coming Revolution of Chinese Robotics

Women as Market Drivers in China

The Greening of Asia: Businesses’ Role in the World’s Biggest-Ever Environmental...