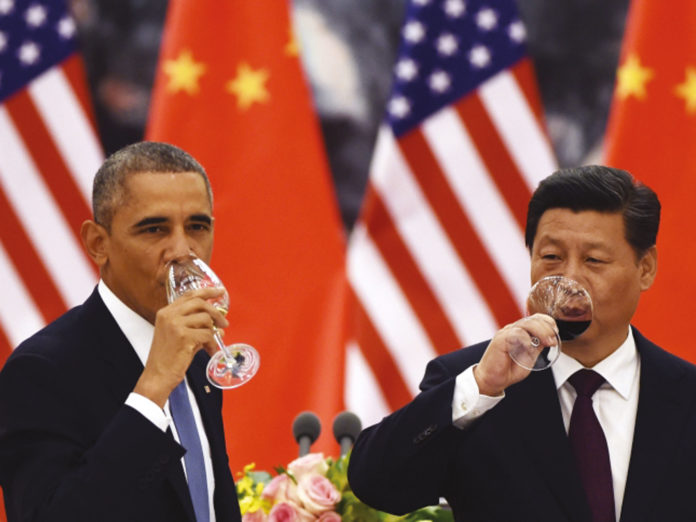 Step by step, Washington is inexorably setting up a major provocation against China. Until now, the Obama regime tightened a military encirclement of China, expanding its armed forces agreements with Japan, the Philippines and Australia. In addition, it has promoted the Trans-Pacific Partnership Agreement (TPP), a regional trade agreement which openly excludes China. Obama has ordered a major naval build-up in the South China Sea and embarked on extensive cyber-espionage of Chinese industries and the government via major US high-tech companies, as revealed by Edward Snowden in his release of confidential NSA documents.

As President Xi Jinping prepares for his first US visit as China’s leader on September 25, with the aim of extending economic ties between Chinese and US business (especially with the high tech corporations in Seattle and Silicon Valley), the Obama regime has threatened to impose a series of punitive sanctions against Chinese companies and individuals for ‘cyber-espionage’, essentially undermining the purpose of his trip.

Characterising the Chinese as ‘cyber-thieves’ and imposing sanctions on Chinese businesses on the eve of Xi’s visit will be justifiably seen as a deliberate humiliation and a provocation, designed to treat China as a mere vassal state of Washington.

This will force the Chinese government to retaliate on behalf of Chinese businesses – and President Xi is fully capable of imposing retaliatory sanctions against multi-billion dollar high tech US corporations, which had been flourishing – up to now – in China.

Obama’s decision to provoke China on multiple fronts reflects the overwhelming influence of the militarist power configurations in Washington: the Pentagon, the NSA and the Zionist – militarist ideologues.

In contrast to Washington’s aggressive policy, the major US high tech corporations are almost unanimous in their opposition to Obama’s “military pivot” and are appalled by the threat of cyber sanctions, rightly calling them a “needless provocation”.

For its part, Wall Street has taken an intermediary position – hoping Washington will coerce China into “opening” its protected financial markets to the big US banks. It doesn’t necessarily support aggressive sanctions, which could provoke a response from China closing off lucrative opportunities in the world’s biggest financial market.

Background to a Momentous Confrontation

China’s relationship with the US, EU and Japanese multi-national corporations has changed due to its recent technological advances in its manufacturing and service sectors moving its production up the value chain. Increasingly, the Chinese have been demanding technology transfers from their multinational partners and an increasing use of locally manufactured parts in their assembly plants.

China’s economic expansion and industrial maturation has evoked divergent responses from the elites in Washington, Silicon Valley and Wall Street.

James Petras is a Bartle Professor (Emeritus) of Sociology at Binghamton University, New York. He is the author of more than 62 books published in 29 languages, and over 600 articles in professional journals, including the American Sociological Review, British Journal of Sociology, Social Research, and Journal of Peasant Studies. He has published over 2000 articles in nonprofessional journals such as the New York Times, the Guardian, the Nation, Christian Science Monitor, Foreign Policy, New Left Review, Partisan Review, TempsModerne, Le Monde Diplomatique, and his commentary is widely carried on the internet. He is winner of the Career of Distinguished Service Award from the American Sociological Association’s Marxist Sociology Section, the Robert Kenny Award for Best Book, 2002, and the Best Dissertation, Western Political Science Association in 1968. His latest books include: Extractive Imperialism in the Americas: Capitalism’s New Frontier (With Henry Veltmeyer, 2014), and The Politics of Empire: The US, Israel and the Middle East (2014)