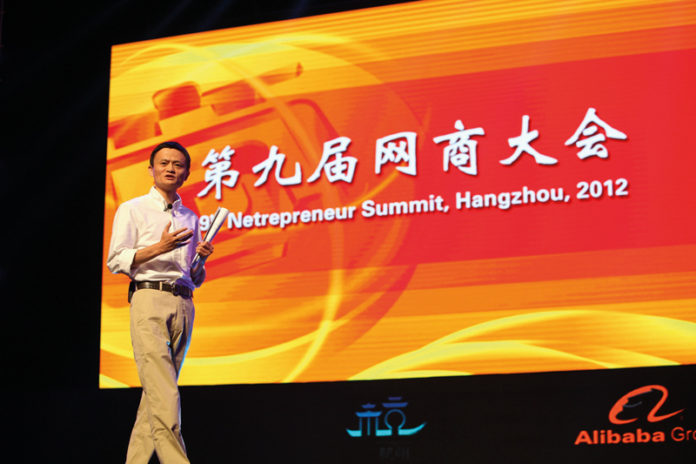 Jack Ma made history last year when his company, Alibaba, went public with an IPO of $25 billion – the largest in the world. The man that made it happen is as much of a success story as his company: once turned down for a job as a server at KFC he is now the richest man in China, and he has a lot to say on the subjects of leadership, success, and the future of ecommerce.

The most striking thing about Jack Ma’s interview at the World Economic Forum’s annual meeting in Davos earlier this month was the entrepreneur’s humility‭, ‬he spent a good deal of his time talking about the many failures that eventually lead him to Alibaba‭. ‬

One of the secrets of Alibaba’s success, according to Ma, is the amount of women who work there; 47% of the company is women, management is 33% women and senior management is 24% women.

One of the secrets of Alibaba’s success‭, ‬according to Ma‭, ‬is the amount of women who work there‭; ‬47%‭ ‬of the company is women‭, ‬management is 33%‭ ‬women and senior management is 24%‭ ‬women‭. ‬As anyone will tell you companies perform better when there is diversity at all levels of management‭, ‬and Alibaba certainly performs well‭. ‬As Ma said at Davos‭, ‬“Women think about others more than they think about themselves‭,‬”‭ ‬which often means their business strategy is unique and often more encompassing than their male counterparts‭.‬

Despite being a leader in the ecommerce industry Ma said at Davos that he hopes that in fifteen years people forget about the word‭ ‬“ecommerce”‭ ‬because it will be as natural to them as electricity‭. ‬He is passionate about the opportunities Alibaba gives to small companies‭ ‬and merchants by enabling them to do business online‭, ‬and is very conscious of the immense trust that has been placed in him by‭ ‬these retailers‭. ‬In his interview at Davos‭, ‬Ma recounts the times that he has received tokens from his customers‭, ‬once a customer even picked up his cheque in a restaurant because they knew that he wasn’t making any money at that time‭. ‬And it is clear that Jack Ma in turn feels a responsibility and affection for his customers‭, ‬and the businesses for whom he provides a platform‭. ‬When describing ecommerce transactions to Charlie Rose in this interview he asks‭ ‬“how can you do things online unless you trust‭?‬”

But responsibility doesn’t seem to perturb Ma‭, ‬who optimistically quips that in ten years Alibaba could be bigger than Walmart‭. ‬He also looks favourable‭ ‬on China’s decline in growth‭, ‬rightfully pointing out that China is the second largest economy in the world and if they were to sustain their 9%‭ ‬growth the people of China would‭ ‬“never see the blue sky‭.‬”‭ ‬In other words‭, ‬such growth is unsustainable and rightly so‭. ‬There may be a decline in growth in China but there is certainly no decline in quality‭.‬