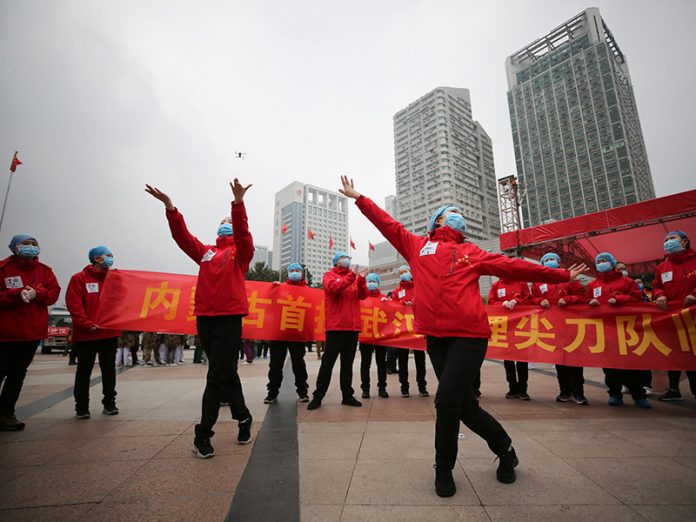 Two months ahead of most other businesses in dealing with COVID-19, companies in China offer key insights into what it takes to regroup, rebuild, and position for growth.

Two months from now, how well will companies around the world be adapting to the challenges posed by COVID-19? The actions and experiences of businesses in China suggest some answers.

Chinese companies are about two months ahead of most other businesses in their efforts to mitigate the virus’s effects. By the end of March, for example, construction was back to 80 percent of previous levels, from a low of 20 percent. Home appliance production had rebounded to more than 90 percent, from lows of 50 percent. Even while factoring in varying levels of government oversight and incentive in different countries, these figures point to smart practices for others to implement.

To identify those practices, Accenture surveyed more than 100 Chinese executives representing such industries as chemicals, consumer goods, energy, financial services, freight logistics, life sciences, and travel. We then interviewed a number of other leaders, from CEOs and chief digital officers to heads of supply chain, R&D, and factory operations.

We found that leading companies have concentrated their efforts in two areas. First, they set out to steady the business. The crisis has proven to be a huge testbed, especially for examining processes and technology infrastructure. As one executive put it, the effects of the virus “made us see everything that didn’t work.”

Second, they have learned to stretch the business. Many have made efforts to help battle the effects of the virus—actions that have incidentally strengthened their brands. It has also led some companies to discover crisis-borne innovations with high potential. Rather than retreat, one executive emphasized that “it’s important to have a growth mindset amid such a crisis.”

The company leaders we spoke to have taken three steps to steady their businesses. Almost all, for example, were quick to set up a crisis-management team. What’s different from the usual approach: a focus not only on internal operations but on the entire ecosystem. It’s more of a “control tower” approach, set up to take a big picture view—and to ensure that managers throughout the business also see and understand that view.

One example comes from the 50-50 joint venture between Dongfeng Motor Group and Nissan. The crisis management team includes experts from production, logistics, marketing, new product development, and HR. They meet daily with suppliers, relaying information on topics ranging from employees’ well-being to inventory and logistics, and communications with local governments to other company executives. They also conduct scenario-planning exercises and develop plans to prepare the company for policy changes and shifts in the market.

Through this process, the company was able to move quickly to reassign more sales support to online channels, producing a “digital marketing playbook” to train employees. It also elevated the virtual shopping experience for customers, with techniques ranging from virtual reality-powered online car demos to door-to-door test-drive bookings. On the supply side, the company also got a jump on engaging more local parts-makers to ensure production in April and May.

Chinese companies have also pushed the boundaries of digital tech in innovative ways. For example, 63 percent have improved coordination between physical and online sales channels, with a focus on growing the online channels in distinctive ways.

Consider retailer Suning.com, which despite the “dot-com” has 1,600 retail stores in China. Suning turned many stores—closed to walk-in business—into live-streaming marketing channels, essentially live broadcast rooms, featuring employees in new roles as online influencers. This “social commerce,” already disrupting online retail in China, now reaches more than 60 percent of the country. For shoppers, the draw is entertainment, information, the chance to ask questions and offer up comments, and of course to make purchases. On March 6, Suning’s physical stores across China hosted more than 5,000 livestreaming events, with more than 2 million viewers in attendance.

Another area of boundary-stretching: using digital tech to conduct maintenance remotely. More than half of the companies we spoke to are doing this. For example, as elsewhere, China has constructed new hospitals on the fly. One industrial equipment company, XCMG, used a software platform to not only to monitor all of its construction equipment in real time but also to screen the body temperatures of its workers.

Some companies have pushed the boundaries on remote R&D. Insurance company China Life relied on a cloud-based platform it had deployed in 2019 to continue work during virus-compelled shutdowns. This platform integrates tools, codes, and hardware resources, enabling developers to collaborate easily. Already the end of February, the R&D center had completed 25 COVID-19 related tasks remotely. These included, for example, upgrading the infrastructure to support call-center employees working from home. Each of these tasks, on average, took just 8.6 days to launch.

Finally, companies rebounding in China have also shifted from a mindset of “just in time” to one of “just in case.” They have expanded their supply chains, focusing on strengthening relationships with local suppliers. Informed by their crisis team, two-thirds of surveyed executives said they’ve been evaluating future demand and adjusting inventory levels with greater care. Many are also scrutinizing logistics lead times and delivery schedules far more closely.

Instant noodle and beverage producer Master Kong, for example, drastically ramped up communications with retail outlet leaders. The company was able to get a jump on changing demand, first shifting inventory and support away from large, physical retail channels to online channels and smaller stores, and then quickly shifting again as larger physical retailers reopen. (In China, the public was more inclined to patronize smaller stores in their own communities, buying smaller amounts and spending less time shopping each trip. They were more reluctant to travel to larger retailers where they were more likely to spend longer in store and encounter many more people.)

As the crisis grew—and as we’ve seen around the world—many Chinese companies enlisted in the fight. Does it help the brand? Yes. Was that the motivation? No. It was just the right thing to do.

Longer term, what’s critical is the high-potential innovation that may emerge.

Meanwhile, China Unicom has partnered with Meituan, a food and retail delivery service. The telecom giant will support Meituan’s autonomous delivery vehicle with a 5G network. In a world that increasingly seeks “contactless” commerce, Meituan is piloting the use of two autonomous vehicles for grocery delivery and also ramping up production of robots for smaller deliveries.

Digital technologies have clearly become the load-bearers for the kinds of cross-company collaborations that crisis-response efforts have required. But as one executive put it, “It seems as if this crisis will be a breakthrough for ecosystem collaboration.”