China is currently in the midst of a severe wave of COVID infections and deaths. We don’t know exactly how bad it is because of significant gaps in official reporting, but by all indications, things are dire. News reports suggest hospitals and mortuaries are overflowing.

So how did China get here, and how will the situation play out?

Despite the popular perception that the current wave of infections is a direct result of the country lifting its zero COVID policy in early December, this isn’t quite true. Cases were already rising in China before restrictions were eased.

I believe the reason cases are exploding now is largely because China continued its zero COVID strategy for too long after vaccinating its population.

We know immunity from vaccines wanes in the months afterwards. One preprint (a study yet to be reviewed by other scientists) showed that by eight months after the first booster, almost all protection against infection is lost. Protection against severe disease is more durable but still wanes.

China’s vaccination campaign was mostly completed by February 2022. So by autumn, the protective effect against infection would have been largely gone. Although protection against severe disease and death is longer lasting, this would also have declined.

By contrast, New Zealand ended its COVID suppression policy soon after completing its vaccination campaign. As expected, reopening caused a surge in infections. But the death rate was lower than in many countries.

Although vaccination is the safest way to protect against COVID, emerging research shows protection against severe disease is sustained a little longer following a natural infection, and even longer if someone has “hybrid immunity” (meaning they’ve been both vaccinated and infected).

Given few people in China had hybrid immunity when this wave began, some (but not all) of the protection against severe disease will have been lost.

Further, reports suggest vaccination rates among older people in China lag behind those of younger people. If true, this would also drive up severe disease and deaths, alongside infections.

How things could go

China’s current wave will peak at some point and then decline. But when this peak will occur, and how high it will be, depends on how many infections have actually been occurring – which we don’t really know.

UK-based health data firm Airfinity has estimated that since December 1 there have been 33.2 million infections and 192,400 deaths. But leaked notes from a meeting of China’s National Health Commission estimated that about 250 million people (18% of the population) were infected in the first 20 days of December. 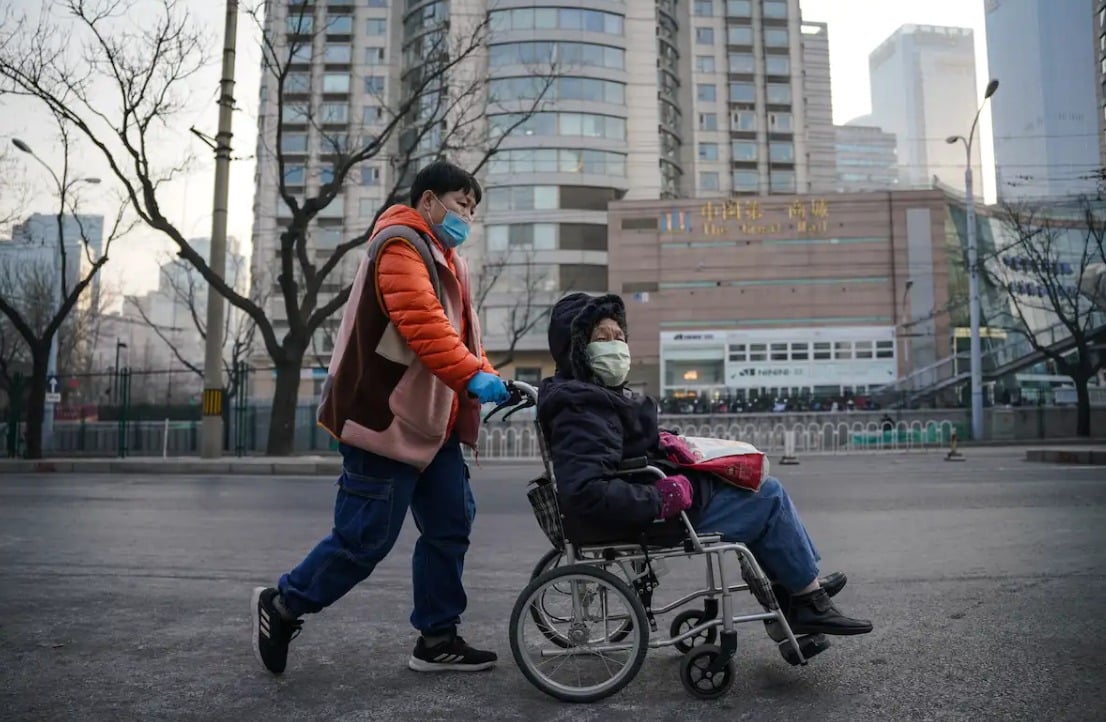 There’s also some risk associated with increased travel within China around the Chinese new year, which begins on January 22. If infections are still climbing by then, new year travel and celebrations would further boost infection rates and add to pressures on health services. If the peak has already passed it would have less impact.

What should China do now?

It may well be too late to really alter the course of this outbreak. Estimates of the reproductive number, or R0 (the average number of people an infected person passes the virus on to), have been greater than 10 and as high as 18 during this outbreak.

With an R0 so high, non-pharmaceutical interventions such as lockdowns, school closures and mask wearing would not be enough to control the spread of the infections in any meaningful way.

The most important thing China can do now is to boost vaccine uptake among its older and more vulnerable population. It may not be too late for this as many such people may be avoiding mixing and therefore have not yet been exposed.

What’s the risk to the rest of the world?

In contrast to China at the outset of this wave, most countries by now have high immunity and protection against severe disease and death from COVID. The European Centre for Disease Prevention and Control has noted that China’s surge “is not expected to impact the COVID-19 epidemiological situation” in Europe.

Also, the majority of variants identified in China are descended from the BA.5.2 and BF.7 lineages. These lineages peaked in Europe last summer and continue to decline, so any introductions from China should not add greatly to the number of these infections.

The main concern for Europe is the new XBB.1.5 variant which has been increasing rapidly in the US over the past month.

Of course there is the risk another variant could arise in China because of the large numbers of infections. That said, a new, more serious variant could also arise from somewhere else in the world.

From January 5, people travelling from China to England must take a pre-departure COVID test. Some other countries have adopted this approach too.

But we’ve known since well before COVID that point of entry and point of exit screening is largely ineffective at controlling the international spread of infectious diseases. Such screening was shown to be of little value from early in the pandemic.

And even if testing at borders was effective at controlling the spread of the virus, its merit in countries like the UK – where COVID is already circulating – would be limited.

This article was originally published in The Conversation on 26 December 2023. It can be accessed here: https://theconversation.com/chinas-covid-situation-is-dire-but-it-shouldnt-pose-a-big-risk-to-other-countries-197219

Paul Hunter – His research interest are the epidemiology of emerging infectious disease, especially that linked to environmental factors. Most interest in spread of infection by drinking water, but also recreational water contact and food. Interest in zoonotic diseases. Conducting case-control and other epidemiological studies in the UK, Europe and the developing world. Interest in risk assessment and risk communication.