The United States’ interests in the South China Sea give cause for concern and scrutiny.

The United States is considering sending warships and helicopters to patrol in the South China Sea, under the guise of so-called “freedom of navigation” exercises. This is reportedly part of a plan to pressure China into scaling back its construction work in the Spratly islands (known in China as the Nansha islands).

That would be an unjustifiable and provocative act, which could lead to a military confrontation between the world’s two most powerful countries.

The US has so far failed to build a strong case for its much-talked-about strategic move. On May 13, US Assistant Secretary of State Daniel Russel said in testimony before the Senate Foreign Relations Committee said that the US “can and does play an active role in the South China Sea to defend our national interests and international legal principles”.

Defending national interests is certainly true – but defending “international legal principles”? That seems a hollow claim, since Washington is not even a member of the United Nations Convention on the Law of the Sea, which it refers to frequently when it comes to the South China Sea disputes.

So how does the US justify potentially using its military to try to contain the “China threat”? And do those justifications stand up to scrutiny?

One Rule for Most Nations, Another for China

There has been much media coverage and hype about how quickly China is creating a sizeable landmass in the disputed South China Sea islands.

But nearly all of those articles have failed to explain one critical point: what is the proper size of reclamation that is acceptable and not alarming?

And why is there one rule for China and another for other nations?

Speaking at the same Senate hearing on May 13, US Assistant Secretary of Defence David Shear explained that:

“Over the past two decades, all of the territorial claimants, other than Brunei, have developed s in the South China Sea, which they use to project civilian or maritime presence into surrounding waters, assert their sovereignty claims to land features, and monitor the activities of other claimants. In the Spratly islands, Vietnam has 48 outposts; the Philippines eight; China eight; Malaysia five; and Taiwan one”.

So, despite being the largest and most powerful country among the claimants, China has, for many years, exercised a high degree of self-restraint.

And as Shear also said, compared with Vietnam and the Philippines, China is a latecomer:

Between 2009 and 2014, Vietnam was the most active claimant in terms of both outpost upgrades and land reclamation, reclaiming approximately 60 acres.

But have you ever read or heard of US criticism of Hanoi, or a US threat to send warships to deter the Vietnamese activity in the South China Sea?

Washington is not a claimant to the contested Spratly/Nansha island territories, and it has repeatedly said it will stay neutral.

Yet it has been very vocal in criticising “the pace and scope of China’s land reclamation”, as US Secretary of State John Kerry said while visiting Beijing last weekend.

It is true that China’s has built up land in the Spratly/Nansha islands at a rapid pace – far more quickly than any other nation in the region has before.

In just one of the sites China is working on, it has expanded from a 380-square-metre platform to an island of 75,000 square metres in a matter of five months, according to IHS Jane’s Defence Weekly.

However, why is it a problem now that China is doing it, when it wasn’t seen as a problem before?

The increased criticism and pressure from the US does not appear to be deterring the Chinese government. Foreign Minister Wang Yi said at the same press conference with Kerry that:

The determination of the Chinese side to safeguard our own sovereignty and territorial integrity is as firm as a rock, and it is unshakeable. 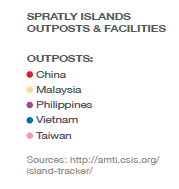 Claims of Defending Freedom of Navigation

Freedom of navigation is an old and widely recognised principle in international law, which means that ships flying the flag of any sovereign state shall not suffer interference from other states (unless there’s a legitimate legal reason to do so).

If there’s one country that cares the most about the freedom of navigation, not just in the South China Sea but also internationally, it is China.

That’s because China is now the largest trading nation in the world, and 80% of its overseas trade is conducted through shipping lanes in the South China Sea.

If there’s one country that cares the most about the freedom of navigation, not just in the South China Sea but also internationally, it is China.

China not only needs to get its exports out to the world, but it also needs vital imports. For example, China imports huge amount of iron ore, coal and liquefied gas from Australia.

At one point, Australia accounted for as much as 70% of China’s iron ore imports. Any disturbance of the sea lanes will not only affect countries like Australia but also make it difficult for China to continue its construction of high-speed rail, bridges and ports.

It defies logic for Beijing to somehow disrupt peaceful shipping lines, because that will put itself in an undesirable situation, both for its exports and imports.

A Clash of Two Superpowers

The Spratly/Nansha islands dispute is completely different from the Crimea situation.

China is reclaiming land and building infrastructure in its own territory, or at most, in disputed sea waters. Beijing is not grabbing a piece of land from another sovereign country.

So why is Washington so eager to flex its muscles to challenge the Chinese?

It’s really about the competition between an established super power and a rising one. The US talk of using its military in the South China Sea could be another attempt to contain the rise of China.

All those factors may help explain why the US is threatening to escalate the tensions in the South China Sea, despite not having a strong case to intervene.

China’s actions in the South China Sea do not breach international law, as even US Assistant Secretary of State Russel acknowledged in a recent interview with The Washington Post:

China is violating the “feng shui” of South-East Asia? It’s hardly a compelling argument for US intervention in the South China Sea, especially when it has turned a blind eye to other nations’ island building for so long.

Qinduo Xu is a  Visiting Scholar and political analyst at University of Melbourne.Mr. Xu’s current research is on China-Japan relationship, including China’s Japan policy. He provides comments and analysis regularly on Chinese foreign policies and China’s relationship with the U.S., Australia, Japan and other Asian countries.

The article was first published in The Conversation, July 2015: http://ow.ly/RxFhZ

Opening China to the World: Deng Xiaoping, the Democracy Wall and...