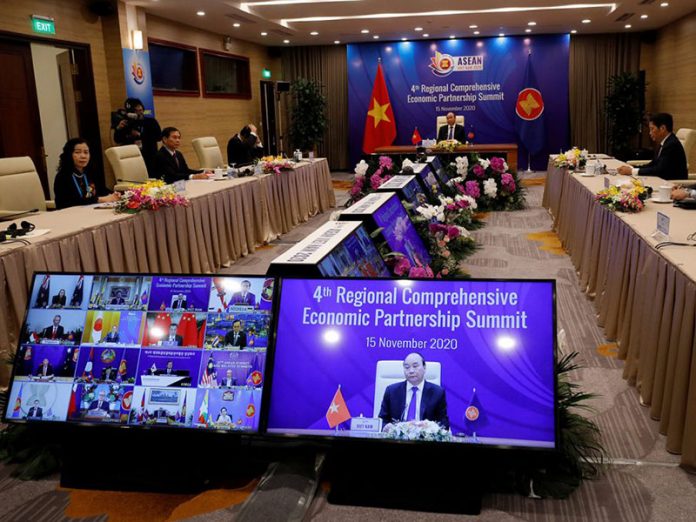 China and another 14 countries in the Asia-Pacific region have signed one of the biggest free trade agreements in history to form the world’s largest trading bloc. The free trade agreement covers 2.2 billion people and encompasses around one third of the world’s economic output. The agreement reduces customs tariffs, establishes common trade rules and supports open and connected supply chains. It has chapters on trade, services, investment, ecommerce, telecommunications and copyright. The new agreement is known as the RCEP, which stands for Regional Comprehensive Economic Partnership. Besides China and the ten ASEAN nations of Vietnam, Singapore, Indonesia, Malaysia, Thailand, the Philippines, Myanmar, Brunei, Laos and Cambodia, the agreement also includes Japan, Australia, South Korea and New Zealand.

The agreement sends out a powerful message to the rest of the world. While protectionists have gained the upper hand in the U.S. and countries in the west are busy waging trade wars, China is defending the capitalist ideal of free trade. Western countries still do not understand the reasons for China’s economic success. Time and again, western media outlets report on the “Chinese state economy” or even the “communist system.”

When considering China’s economic rise, it is important to distinguish clearly between the country’s political system as a one-party state and its economic system, which has nothing at all to do with communism. The fact that the state still plays such a major role is primarily due to the fact that, just a few decades ago, China’s economy was still purely state-run and has undergone a process of gradual transformation. First, private property rights were introduced and then a price reform. Over the last few decades, a steady stream of free market policies has been introduced.

One of the biggest mistakes commentators in the west make is to underestimate the role of the private sector in China. A working paper from the World Economic Forum stated that “China’s private sector – which has been revving up since the global financial crisis – is now serving as the main driver of China’s economic growth. The combination of numbers 60/70/80/90 are frequently used to describe the private sector’s contribution to the Chinese economy: they contribute 60% of China’s GDP, and are responsible for 70% of innovation, 80% of urban employment and provide 90% of new jobs. Private wealth is also responsible for 70% of investment and 90% of exports.” Today, China’s private sector contributes nearly two-thirds of the country’s growth and nine-tenths of new jobs, according to the All-China Federation of Industry and Commerce, an official business group.

One of the biggest mistakes commentators in the west make is to underestimate the role of the private sector in China.

It is essential to understand the reasons for China’s economic success – and this applies in particular to western countries. There would seem to be two mutually exclusive narratives: Either China’s incredible economic success is the result of the state’s major role in the country’s economy – a view espoused by some western politicians who want to justify their own calls for increased state control over their own economies – or China’s success is “not because of the state, but in spite of the state,” a phrase that the Chinese economist Zhang Weiying used in a conversation we had in Beijing in 2018. Anyone who recognizes the true drivers of the Chinese economic miracle will also understand that the U.S. and Europe need less government intervention, not more. And they will also understand that capitalism is not the problem, but the solution – not only in China, but in the U.S. and Europe, too.

At no other point in human history have so many people escaped abject poverty as over the last few decades in China. In 1980, as many as 88% of the Chinese population were living in extreme poverty; today the figure is less than 1%. Whether China continues on the path toward capitalism, or whether forces advocating a stronger role for the state gain the upper hand, is still unclear. This battle between two opposing philosophies has existed in China for decades – and it has never been completely decided.

However, the new free trade agreement proves that China’s leaders have understood the power of economic freedom. A professor with whom I spent many hours in China (he knew the U.S. well because he had spent time as a visiting professor at an American university) said to me, “We Chinese will be the last defenders of capitalism.” Officially, “capitalism” in China (as in the west) is a “dirty word.” But China’s success in recent decades is undoubtedly based on free-market capitalist reforms. Today, there are more billionaires in China than anywhere else in the world except the U.S. The concept with which Deng Xiaoping began his reform policy, “Let some people get rich first,” has worked.

At no other point in human history have so many people escaped abject poverty as over the last few decades in China.

I gave numerous lectures in China in 2018 and 2019. The people I met were all enthusiastic about the idea of becoming rich as an entrepreneur. I remember a lecture at HSBC Business School in Shenzhen, a small university. I gave my lecture about how to get rich on a Friday evening. Of the university’s 1,000 students, 850 attended and the lecture hall was full to bursting. https://www.youtube.com/watch?v=oskFI9rJzuw

The lecture and discussion went on long into the night. I doubt that Friday evening at a university in the U.S. or Europe would have been anywhere near as interesting. I suspect that in the U.S. and Europe more students would be interested in attending a lecture on how to abolish capitalism or on the moral reprehensibility of wealth.

Rainer Zitelmann’s book The Power of Capitalism https://the-power-of-capitalism.com/ contains a detailed exploration of the reasons for China’s economic success.