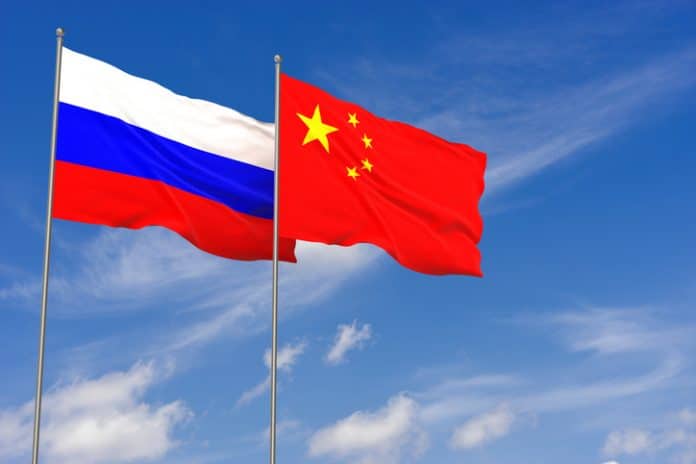 By Marcin Kaczmarski and Natasha Kuhrt

Against the backdrop of a western diplomatic boycott of the Beijing Winter Olympics, China and Russia have marked the occasion by showing off their increasingly close relationship. Russia’s president Vladimir Putin posed for pictures with Chinese leader Xi Jinping at the opening of the 2022 Winter Games, declaring their opposition to further enlargement of Nato and calling on the western alliance to “abandon its ideologised cold war approaches”.

In a joint statement, the two leaders announced a new era in relations that would “know no limits” and be “superior to political and military alliances of the cold war era”. Meanwhile they said Nato must “respect the sovereignty, security and interests of other countries … and to exercise a fair and objective attitude towards the peaceful development of other states”.

In light of Moscow’s aggressive stance over Ukraine and equally combative noises emanating from Beijing over the future of Taiwan, many international observers are concerned at the increasingly close relations between the two countries.

The chair of UK’s parliamentary defence committee, Tobias Ellwood recently wrote that the west has only belatedly woken up to the challenge from Russia’s increasingly close relationship with China. “Russia provides oil, gas and military hardware. China, in return, provides advanced technology,” he wrote, adding that: “Today, we are seeing the birth of a potent anti-democratic alliance. It is on track to see the world shear into two spheres of competing influence. And we have let it happen.”

It was not until 2021 that NATO explicitly recognised the challenge presented by a Russia-China rapprochement. The two powers declared their “strategic partnership” in the 1990s and have since regularly signalled their growing convergence, coalescing around a shared antipathy to liberal democracy and opposition to what they perceived as externally sponsored regime change – for example, the “coloured revolutions”, when popular uprisings pushed such states as Ukraine or Georgia towards closer cooperation with the west.

But both the 2020-21 protests in Belarus and the stand-off between Russia and the west over Ukraine have created problems for Beijing, which has significant trade and investment ties with both countries which play key roles in China’s Belt and Road programme.

While the current Russian-western stand-off arguably diverts US attention away from Asia-Pacific and Taiwan, China would not want a potential armed conflict in Ukraine to cast a shadow over the Winter Olympics.

Given these differences, news of apparent security cooperation between the two should be taken with a pinch of salt. While there is growing collaboration between Chinese and Russian armed forces, the primary function of their military cooperation consists in political signalling, rather than in preparing for a joint military action.

For the past few months, Moscow has been explicit in its support for China’s use of military force as an instrument of pressure on its northeast Asian neighbours, Japan and South Korea. In October, the Russian and Chinese navies conducted their first joint patrol around Japan.

In November, strategic bombers from two countries organised their third joint strategic air patrol over the Sea of Japan and the East China Sea, which demonstrated that Russia and China were willing to jointly counter the US-Japanese alliance. They had also conducted a joint army drill in northwest China’s Ningxia Hui Autonomous Region in August.

Beijing did not, however, respond in kind, refraining from support for Russia’s military brinkmanship in Europe. Chinese troops did not take part in the most recent edition of Russia’s strategic exercises, Zapad-21, which were held in western Russia and Belarus. Instead, Russian troops joined their counterparts in China for a joint exercise, organised far away from Europe.

Beijing treads a fine line between targeting individual European states – as with Lithuania, which was subject to Chinese sanctions such as the removal from the Chinese customs system – and portraying itself as Europe’s peaceful partner. Open support for Moscow’s political-military brinkmanship in Europe might well push the EU states closer to the US.

Even the joint declaration – with its warning about Nato enlargement – is ambivalent on Ukraine. While Russia reaffirms its adherence to the One China policy regarding Taiwan, there is no specific mention of Ukraine. Both sides agreed to oppose attempts to undermine security and stability in their “common adjacent regions”, which can only mean central Asia.

Russia seems to have moved from a position of studied neutrality on China’s policies in the Asia-Pacific, to outright condemnation of the trilateral security initiative between Australia, the UK and the United States, “AUKUS” – and Washington’s new Indo-Pacific strategy in general. The joint declaration notes that the two countries are seriously concerned by such developments. Nevertheless, as Moscow struggles to keep India on side, its support for China’s policies in south Asia remains limited.

Thus, the extent of potential Chinese support for Russia in the face of another round of western sanctions remains uncertain. For now, as one commentator notes “it is enough that China remains positively neutral”. Moscow had high hopes for economic assistance after 2014 – but, while Beijing provided some help to Putin and those in his circle, most Chinese companies stayed away, fearing damage to their ties with western markets.

Even the new 30-year energy deal can hardly be considered a success for Russia. Building a new gas pipeline to China, Gazprom will increase its export to China by 25%, from 38 billion to 48 billion cubic metres a year (BCM). This means central Asia remains China’s top natural gas supplier, with a pipeline capacity of 55 billion cubic metres. Details of the new deal are unavailable, but pricing will be an issue as China is known to drive a hard bargain.

It seems unlikely that Moscow and Beijing are engaged in a coordinated attempt to pull the US into a two-front war, but keeping this fear alive in the west is valuable in and of itself.

This article was originally published in The Conversation on 8 Fabruary 2022. https://theconversation.com/russia-and-chinas-growing-friendship-is-more-a-public-relations-exercise-than-a-new-world-order-176314

Dr Marcin Kaczmarski is a lecturer in the School of Social & Political Sciences, University of Glasgow. In his research, he focuses on Russia-China relations, Russia’s foreign and security policy, comparative regionalism, and the role of emerging powers in international politics

Dr Natasha Kuhrt is a Lecturer in International Peace & Security in the Department of War Studies. After gaining a BA first class hons in Russian & German language and literature followed by an MA in Soviet Studies, at the School of Slavonic and East European Studies (University of London), she spent several years in publishing before obtaining a PhD at UCL on Russian Policy Towards China and Japan. Dr Kuhrt joined King’s as a visiting lecturer in the Law School in 2002, before going full time in the Department of War Studies in 2009.