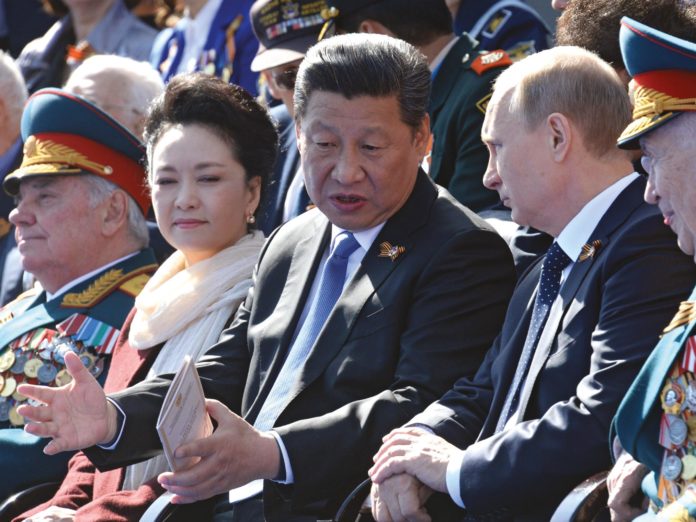 Even though Russia and China have their share of disagreements and competing interests, they have no doubts about their main adversary – the United States. In this article, Artyom Lukin discusses how Russia and China march together to eye a common adversary.

On Sept. 3 China marked the 70th anniversary of Japan’s defeat in World War II with a grand parade on Tiananmen Square in Beijing. As expected, most world leaders chose to stay away so as not to confer international legitimacy on the commemorations that many in the West see as an overly propagandistic, nationalistic and anti-Japanese display of military force. The representation of the United States and its major allies were downgraded to the level of ambassadors and ex-leaders like Tony Blair and Gerhard Schröder. The conspicuous exception was South Korean President Park Geun-hye who, after some hesitation, went to Beijing despite Washington’s displeasure. Not very surprising, given that South Korea depends on China for 26.1 percent of its exports.

However, it was Vladimir Putin of Russia who was treated as the chief guest of honour at the Chinese celebrations. Throughout the commemoration proceedings Putin was to the right side of Chinese President Xi Jinping. This exactly mirrored the May 9 parade in Moscow marking the defeat of Nazi Germany a few months earlier. At that event, no Western leader showed up and Xi Jinping was the most prominent and honoured guest.

While displays of marching troops and rolling armour have been held regularly on Moscow’s Red Square, for China it is quite a rare occasion. Before, lavish parades on Tiananmen Square only took place once every 10 years to mark anniversaries of the founding of the People’s Republic of China. The recent parade was the first ever to glorify China’s victory in World War II, or “the Chinese People’s Resistance Against Japanese Aggression and World Anti-Fascist War” as it is officially called in China. It was not lost on the observers that the festivities in Beijing strikingly resembled the Victory Day commemorations in Moscow. Chinese officials acknowledged that they drew upon Russia’s experience in “mobilising patriotic sentiments.”

Why should Russia and China celebrate the victory in the Second World War as if it has just ended? After all, for most of the countries that participated in the war it has long become history. But for Moscow and Beijing the war continues to carry special significance. Not to be forgotten, it is Russia and China that suffered the heaviest human toll during the war. Russia lost some 27 million people, while China’s casualties are estimated to be about 20 million people. The outcome of World War II made the Soviet Union a superpower and thus accorded it a top status in the international system – a privileged position that contemporary Russia is striving to retain, at least in its post-Soviet and European neighbourhood. For China, victory over Japan has come to symbolise the end of “the century of humiliation” at the hands of foreign powers and has been used by the Chinese Communist Party to legitimise its rule. The governments in Russia and China utilise victory over Nazi Germany and Imperial Japan as a powerful tool to whip up and manipulate nationalistic emotions of the populace.

The victory in WWII has always been seen in Russia as achieved primarily through the efforts and sacrifice of the Soviet Union, with the help of America and Great Britain. Russia’s official discourse is now palpably changing, with China replacing the Western allies as the second most important contributor to the outcome of the war: the Soviet Union made the decisive contribution to the defeat of the Nazi Germany in Europe, while China overcame imperial Japan in Asia. Xi Jinping’s participation in the Victory Day celebrations in Moscow and Putin’s return visit to Beijing for the commemoration of the end of the war in Asia consolidate this new interpretation of history with the obvious aim of strengthening solidarity between the two countries in opposition to the West.

Xi Jinping’s participation in the Victory Day celebrations in Moscow and Putin’s return visit to Beijing for the commemoration of the end of the war in Asia consolidate this new interpretation of history with the obvious aim of strengthening solidarity between the two countries in opposition to the West.

Russia was among a handful of countries to send troops to take part in the Chinese parade. The soldiers from the elite Preobrazhensky Regiment were given the privilege to close the procession of marching formations on Tiananmen Square, reciprocating Chinese troops’ participation in the Red Square parade back in May. For those in Russia who are well versed in history the sight of Russian and Chinese soldiers marching together may evoke uneasy parallels. In 1808, during the pompous summit of Alexander I and Napoleon in Erfurt, Russian and French troops paraded together, an event followed only four years later by Napoleon’s invasion of Russia. In September 1939, the Red Army and Wehrmacht staged a joint parade in defeated Poland, less than two years before Nazi Germany attacked the Soviet Union. And, perhaps even more to the point, memories still linger of how “the eternal and unbreakable friendship between the Soviet and Chinese peoples” of the 1950s turned into a bitter confrontation in only a few years.

That said, the new edition of Sino-Russian alignment is unlikely to rupture anytime soon. Even though Russia and China have their share of disagreements and competing interests, they have no doubts about their main adversary – the United States. As long as Washington is seen by Moscow and Beijing as trying to contain them geopolitically and subvert their domestic political regimes, the entente between Russia and China will only grow stronger, a prospect that is of increasing concern to many strategic thinkers in the United States.

Just as the new PLA’s hardware was being shown off on Tiananmen Square, five Chinese warships sailed into the Bering Sea near Alaska – the first time China’s navy appeared so close to America’s Arctic shores. The Chinese flotilla came to the Arctic waters fresh from joint exercises with the Russian navy in the Sea of Japan. Right at that time Barack Obama happened to be travelling in northern Alaska. Was it a message from China – “even if you don’t come to our parade when invited, you are bound to see our flag anyway”?

This article was first published in The Huffington Post http://www.huffingtonpost.com/artyom-lukin/russia-china-us_b_8105578.html