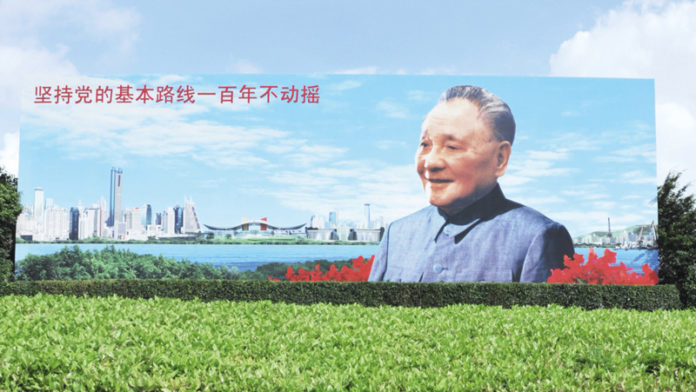 In an excerpt from his new biography of the enigmatic leader, Deng Xiaoping: The Man who Made Modern China, Michael Dillon explores how Deng Xiaoping fought off growing calls for democracy in China after the death of Mao Zedong. Deng Xiaoping overcame these calls in order to march the party forward towards his “grand objective” of four modernisations, but were these modernisations really reform? Or were they simply reactionary?

The central conundrum of Deng Xiaoping’s time in power is the contrast between his tenacious commitment to the transformation of‭ ‬the Chinese economy‭ (‬from a man who before 1978‭ ‬had very limited exposure to the Western capitalist world‭) ‬and his equally resolute refusal to countenance any political reform that might appear to resemble Western multi-party democracy‭. ‬The key to unravelling this conundrum lies not only in his early training and experience but also in the tightrope that he walked in the Politburo‭ ‬and the Central Committee between economic and political reform‭. ‬The more contacts China developed with the Western world the more fraught this issue became‭. ‬The most obvious manifestations of this conundrum were the political contortions that Deng had to‭ ‬perform with his affirmation in 1979‭ ‬of the‭ ‬“four cardinal‭ [‬or basic‭] ‬principles”‭ ‬that governed the operation of the CCP‭ (‬Chinese Communist Party‭) ‬after Mao‭.‬

Different schools of thought had emerged within the Party and some of these alarmed Deng. A small minority of members completely opposed the overall thrust of political changes put forward at the Third Plenum.

The elucidation of the four fundamental principles emerged from a special meeting of the Central Committee between 18 January and 3 April 1979, a “meeting to discuss guidelines for theoretical work” (lilun gongzuo wuxu hui). This meeting was unusually long: it lasted for approximately six weeks, and the length of the meeting is an indication of the difficulties the Party leadership faced. (A historical parallel is the back-to-back meeting of the Politburo and Central Committee in Lushan from 2 July to 16 August, which was the arena for the battle between Mao Zedong and Peng Dehuai and lasted for just over six weeks.) At the March 1979 meeting the new leadership was attempting to reconcile the practicalities of a root and branch reform programme that gave back much of the initiative to private capitalists with an ideological tradition that the Chinese Communist Party and Deng were committed to.

Different schools of thought had emerged within the Party and some of these alarmed Deng. A small minority of members still clung to the rhetoric of Lin Biao and Jiang Qing and completely opposed the overall thrust of political changes put forward at the Third Plenum. Others exaggerated the faults of the past and took the opportunity of the political flux to propose the complete rejection of the Party leadership and the legacy of Mao and Mao’s Thought, presenting themselves as “opponents of famine, persecution and upholders of human rights and democracy”. Some of these individuals began to form organisations and issue their own publications. For Deng and the new Party leadership this was going too far. The organisations and publications that these individuals created were deemed illegal and their originators were accused of “inciting widespread disturbances and attacks against the organs of the party centre and the government”. Some were also accused of collaborating with foreign enemies of China and plotting to provoke more serious incidents – activities which, if allowed to continue, would “damage the political arrangements that provided the stability necessary for the construction of China’s socialist modernisation”. 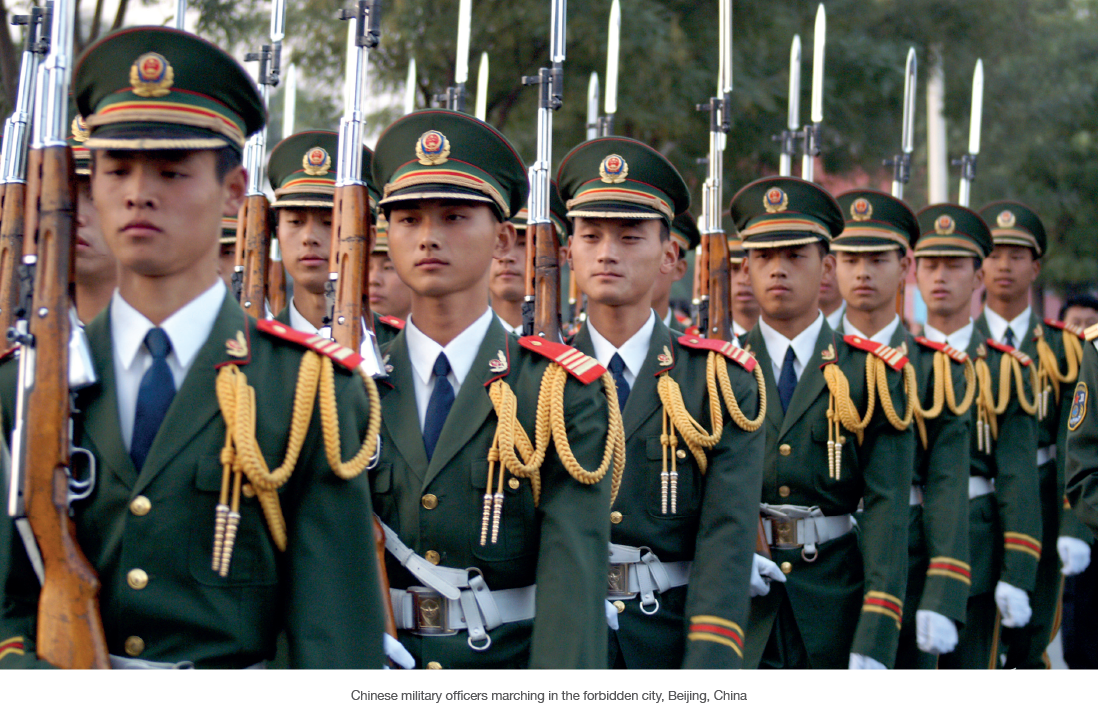 The appearance of the “Xidan Democracy Wall” (Xidan minzhu qiang) was a more troublesome issue. The background to this was the appearance of political posters, originally on Wangfujing Road in Beijing, but later on Xidan Road on the opposite side of the Imperial Palace and closer to the Party compound of Zhongnanhai. The wall on Xidan was soon dubbed Democracy Wall and became a forum for the free expression of ideas by dissenting activists. They had been encouraged by the new freedoms that were anticipated as a result of the Third Plenum and particularly by the decision of the Beijing Municipal Committee to reverse the verdict on the violent demonstrations in Tian’anmen Square that had taken place on 5 April 1976. The committee declared, with the support of the Standing Committee of the Politburo, that the demonstrations honouring Zhou Enlai and attacking Jiang Qing and her supporters should now be treated as a revolutionary and not a counter-revolutionary event. This encouraged dissidents and democracy activists to demonstrate afresh in Tian’anmen Square and, in addition to the official slogan of “four modernisations” (agriculture, industry, science and technology, and defence), activists argued for a fifth modernisation, “democracy”. The best known of these activists was Wei Jingsheng, whose poster was put up on Democracy Wall on 5 December 1978. Demonstrations and a wave of new and creative publications continued into the following year in what is sometimes called the Beijing Spring (although there were similar manifestations of dissent in Shanghai and other cities).

Supporters of Deng were willing to tolerate the movement as long as it criticised his opponents such as Jiang Qing, but the demands for greater democracy were soon regarded as a serious threat to the authority of the CCP. Ironically Deng had lauded the new democratic life that was now possible both within and outside the Party in a speech at a meeting of the Central Committee.

Wei Jingsheng was imprisoned on 16 October 1979, having been convicted of passing military secrets to foreign journalists and diplomats: this was a powerful signal that the wave of dissidence would no longer be tolerated. The Xidan wall was cleared and an alternative venue established in the Temple of the Sun (Ritan) Park, which lies some distance to the east of the most sensitive areas of central Beijing. Access to the park was restricted by police who demanded to see identity cards and, not surprisingly, Democracy Wall ceased to exist. Wei served a total of 18 years in prison and was only finally released, to exile in the United States, in 1997.

Deng always gave the impression of being tough, and he had been down and out politically in the past. He was no stranger to criticism, but he was not prepared to countenance any threat to his reform programme.

On 30 March 1979, towards the end of the discussions in the Central Committee, Deng gave the keynote speech, “Uphold the Four Cardinal Principles” (Jianchi si xiangjiben yuanze), after extensive consultations with Hu Yaobang, Hu Qiaomu and other aides. Much of the speech set out his thinking on where China and the Communist Party now stood and the tasks that faced them. The four principles emphasised in this speech were: the socialist path (shehuizhuyi daolu), dictatorship of the proletariat (wuchanjieji zhuanzheng), leadership by the Communist Party (gongchandang de lindao) and Marxism-Leninism Mao Zedong Thought (Ma Lie zhuyi Mao Zedong sixiang). These were not new, merely a restatement of the Party’s traditional principles and as such considered inviolable. They resulted from a compromise with those who doubted the wisdom of Deng’s reforms and were intended to provide reassurance that, whatever changes might take place in the economy, the political status quo, with the Communist Party controlling the state, would not be at risk.1

Is it possible to know what Deng really thought of the Democracy Wall, the criticism that was being levelled at his new leadership and the demands for greater and more genuine democracy inside and outside the Party? There are no written records to answer this conclusively, but from what we know of his character, it seems unlikely that he would have been nervous about demands for democracy. He always gave the impression of being tough, and he had been down and out politically in the past. He was no stranger to criticism, but he was not prepared to countenance any threat to his reform programme. It was a programme that, in one form or another, he had been working on for over 20 years since he had collaborated with Liu Shaoqi during the 1950s. Once he had secured the support of the Third Plenum in 1978 he was not prepared to countenance any danger to what might be his last opportunity to see his project through.

Whatever his private thoughts, Deng was not able to be a dictator even if that was what he had wished. He could only work within the parameters of the party bureaucracy. Deng was an influential voice in the two most powerful bodies, the Central Committee and the Politburo, but he was not in a position to control them. Although he had managed to secure support for the economic reforms, the opposition was still formidable: those who were most suspicious of the economic reforms were even more distrustful of demands for greater democracy. If Deng had defied his critics and insisted on a parallel programme of wider political reform, it is unlikely that he would have secured sufficient support: the consistent opposition that he faced over his economic policies and the length of time that was needed to hammer out a compromise sustain this view. By allowing any concessions to Western multi-party democracy, he could have jeopardised the economic reforms. When preparing his speech to that fraught meeting of the Central Committee, he consulted two of his advisers, whose views could not have been more different: Hu Yaobang, who would later become an icon for the reform tendency in the CCP, and Hu Qiaomu, a determined doctrinaire opponent of reform. The only possible conclusion is that in the end it was his pragmatism that won: he made the only decision that he believed would work at that time, saved his economic reforms and allowed the demands for political democracy to be silenced, or at least shelved, for another time and another generation.

Edited Excerpt from Deng Xiaoping: The Man who Made Modern China by Michael Dillon (I.B.Tauris Publishers). Copyright 2015. All rights reserved.

Michael Dillon was founding Director of the Centre for Contemporary Chinese Studies at the University of Durham, where he taught Modern Chinese History. He is a Fellow of the Royal Historical Society and the Royal Asiatic Society and was Visiting Professor at Tsinghua University in Beijing in 2009. He is the author of China: A Modern History (I.B.Tauris)