By Linda Lim & Ronald U. Mendoza

The discussion on global rebalancing is at a crossroad, and much of what will shape policy options moving forward will have to be taken-up in roundtables that include more countries than the two usual suspects: China and the United States. At its core, the global economic imbalance is an artifact of an uneven development pattern, whereby one country consumes excessively while the other feeds that consumption. A more orderly and sustained global rebalancing is likely synonymous with a more inclusive development pattern across countries, where consumption, investment and production are more evenly promoted across more countries. True “global rebalancing” will take place if more countries, and larger segments of their respective populations, are able to achieve higher standards of living. In this article, we map out some of the main messages for policymakers to achieve this.

When the issue of global rebalancing first emerged, it was focused squarely on the trade imbalance between China and the Unites States. However, the global economic turbulence of 2009-2010, and the subsequent economic fragility and uncertainty enveloping much of the global economy today, has begun to underscore how broad this issue really is. Analysts like Stephen Roach of Yale University and Yiping Huang of Peking University have also noted how China has taken steps to contribute to possible rebalancing. China’s currency has appreciated by over 30 percent against the US Dollar since 2005. And it has experienced some decline in its trade surplus in recent years.

Nevertheless, the consumption share of GDP in China is still low (and even declined according to recent statistics). Further, the US still has a current account deficit amounting to about 3.1 percent of GDP. In 2011, the US maintained a trade deficit with at least 91 countries, most of which are in the developing world.[ppw id=”82520417″ description=”” price=”0.70″]

The strategy of bashing China and curbing US consumption seems to have done little to rectify the global economic imbalance.

The strategy of bashing China and curbing US consumption (which remains significantly depressed despite mild signs of economic recovery) seems to have done little to rectify the situation. Today, the global economy seems more unbalanced than ever—and on top of this, new risks such as the European debt crisis are dragging down the global economy. Fast growing Asian economies—including newly invigorated economies like Indonesia and the Philippines—are bracing themselves from possible hot money flows owing to more relaxed monetary policy in the world’s financial centers. As global capital moves about in a very unpredictable way, new economic imbalances are potentially being fed.

Broader and more fundamental changes in the global economy could facilitate a more sustained and orderly rebalancing process—one that is also much more politically feasible in both China and the United States. Rapid economic growth in a number of developing countries and socio-economic advancement of large swaths of their populations, are among the forces of change. As parts of the industrialized North ages and enters a period of economic fragility, some parts of the emerging South could play a role in global rebalancing.

In a recent special issue of the Journal of Asian Business co-published by the University of Michigan’s Center for International Business Education and Research (CBER) and the Asian Institute of Management Policy Center, we tried to shed light on some of the main channels through which the process of global rebalancing is possibly taking shape. There are four main messages for policymakers.

First, international value chains suggest that rebalancing is not just between any two countries.

Many countries in the Asian region are part of a complex manufacturing chain. Some export intermediate goods to an end-product assembly hub country—typically China—which in turn exports final goods to industrialized countries and other markets. In recent years, China alone accounted for about half of all input trade in Asia—this is more than double China’s share in input trade in 1995.

For countries like Malaysia, the Philippines, and Thailand vertical integration is a key factor behind their collective export competitiveness. It is possible that with further integration within the Asian region and the formation of the ASEAN Economic Community by 2015—a common market of about 600 million people which is larger than the EU’s 500 million and NAFTA’s over 400 million—these international value chains may play an even greater role in boosting economic competitiveness and crisis resilience among Asia’s most dynamic economies. Indeed, the shift in global manufacturing supply chains has already begun—examples of which, include Foxconn’s US$5-10 billion planned investment in Indonesia and the recent resurgence in electronics and consumer goods manufacturing investments in the Philippines, easily doubling or tripling its FDI inflows this year based on initial estimates.

A sustained reduction in trade imbalances involving final assembly hubs like China, therefore, requires an exchange rate adjustment across a number of Asian economies linked through the value chain. Otherwise, exchange rate adjustments by China alone could be effectively undone by accompanying adjustments in its intermediate trading partners’ exchange rates. Imbalances will be merely diverted if China alone rebalances. This reality is still lost to some of the world’s political leaders who would still prefer to blame China rather than admit, and also address, the failure of international economic cooperation. 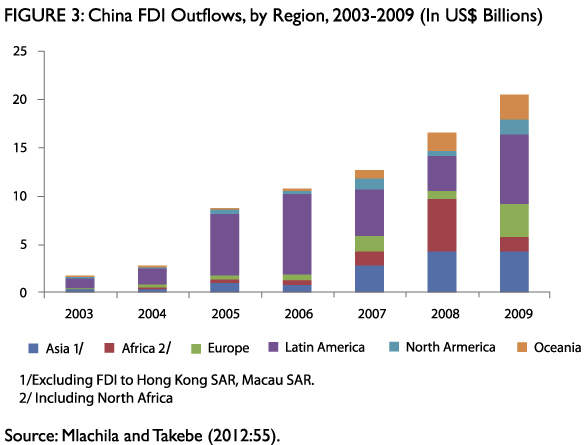 Second, China has many consumers, but so do other rising economic powers.

Asia will soon be home to an ever rising share of the global middle class. This army of consumers will demonstrate an even stronger hunger for globally traded products. While China will account for much of this emerging middle class, countries such as India, Indonesia, Thailand, Philippines, Vietnam, Pakistan and Malaysia will also account for large numbers. Asians living on more than US$2 a day (the international poverty line) increased from only 20% of the total Asian population in 1990 to about 60% by 2009 (Figure 1). In 2009, the US$4.5 trillion in total expenditures in developing Asia represented 19% of total global expenditures. Projections show that by 2030, expenditures in Asia will reach about US$35 trillion—at least 50 percent larger than the US$21 trillion projected for OECD countries for that year.

Third, sending FDI may be just as strategic as receiving FDI.

These trends in FDI flows cohere with BRICs’ national policies encouraging domestic firms to tap new comparative advantages in labor and material costs by investing globally. Russia and China are the two main drivers behind this, as the two countries alone accounted for over 70% of the BRICs’ FDI growth between 2005 and 2008. These patterns of investment are also fueled by abundant foreign reserves, high demand for natural resources and commodities, rising domestic labor costs, and greater appetite for risk in the BRICs, combined with an improving business climate in Africa and other regions that were historically left out even during the best of the boom years of the 2000s. 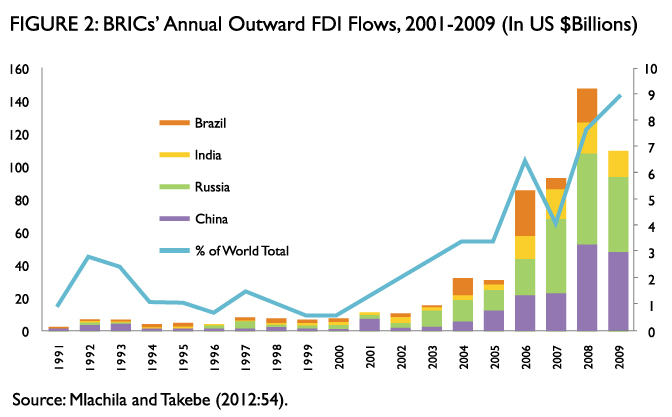 In principle, South-South FDI can help in facilitating global rebalancing by lowering emerging market economies’ lending to the US (i.e. the purchase of US treasuries and accumulation of reserves), and increasing the potential for Africa, armed with a very young workforce, to help satisfy part of the emerging South’s demand for both manufactured goods and raw materials.

Migrants’ destinations are now shifting from industrial countries to fast-growing Asian economies such as Singapore, Malaysia and Thailand.

A final avenue for rebalancing focuses on the often overlooked potential for South-South—and largely intra-Asian—migration flows (and their eventual implications on remittances). Migrants’ destinations are now shifting from industrial countries to fast-growing Asian economies such as Singapore, Malaysia and Thailand. Consequently, the flow of remittances is beginning to shift from North-South to South-South, and this could help ease the current account imbalances in some industrial countries. Asia is now second only to Europe as the global host for most international migrants. Asia has also exhibited the highest growth in migrant stocks and accounts for close to one-third of the total global migrant stock (Table 1).

Most of the migrant source countries have very young populations, including countries in South Asia, Indonesia and the Philippines. Between 1995 and 1999 an estimated 2.6 million workers in Asia worked abroad. 50 percent of these migrants came from Southeast Asia; and they were employed in services, manufacturing, and construction jobs in the Gulf States. New patterns of migration have also begun to emerge in Asia, involving professionals and technical workers, especially in the information technology (IT) and healthcare sectors. With ASEAN governments working on mutual recognition agreements on certain professional skill sets, it is possible that more skilled migrants are going to play an increasing role in intra-regional migration. Nevertheless Asian migrants in these high skilled professions still go to Europe and North America in significant numbers.

Toward a more sustained and politically feasible global rebalancing

Perhaps a more orderly and sustained global rebalancing is likely synonymous with the continued growth and development of more countries in the world. The developing world is now home to the world’s youngest workers and consumers, the main source for raw materials and commodities for manufacturing, and the main hub for many of the world’s international value chains. “Global rebalancing” in this sense is also a product of a less imbalanced economic development process—one which brings in more countries (and larger segments of their respective populations) into higher standards of living. While this should be welcomed, it will also usher new opportunities and challenges. The possible solutions and strategies are unlikely to be merely bilateral. The type of rebalancing that will bring broader gains across countries is the one that will be more likely shaped by industrial and developing countries cooperating for mutual and sustained gains. 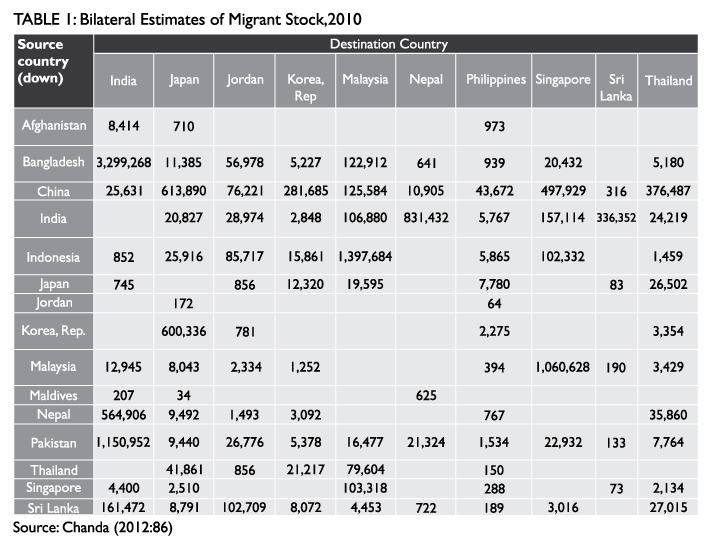 *This article builds on a similarly titled article posted on VoxEU.org and Lim, L. and R.U. Mendoza, Eds. 2012. Journal of Asian Business Special Issue on “An Asian Lens on Global Rebalancing.” Asian Institute of Management (AIM) Policy Center and University of Michigan, 2012.

[/ppw]
About the Authors

Ron Mendoza is an Associate Professor of Economics at the Asian Institute of Management (AIM), and he concurrently serves as the Executive Director of the AIM Policy Center (www.policy.aim.edu). Prior to this, he was a senior economist with UNICEF’s Policy and Practice Group in New York. His research background includes work with the UN Development Programme’s Office of Development Studies, the Federal Reserve Bank of Boston, the Economist Intelligence Unit (EIU), and several non-governmental organizations in Manila. Ron obtained his Masters in Public Administration and International Development (MPA-ID) from the John F. Kennedy School of Government, Harvard University, and his M.A. and Ph.D. in Economics from Fordham University.