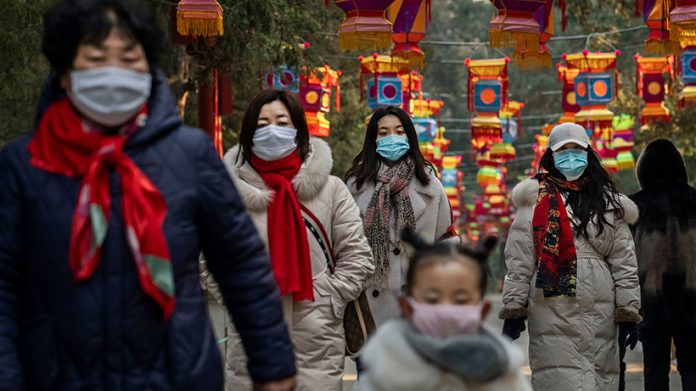 In a positive appeal to the Chinese people, last Saturday, President Xi Jinping has called on the nation’s courage to defeat the deadly epidemic which has already claimed more than 80 lives and more than 2,000 infected worldwide, the vast majority in China. These figures are changing fast, as the spread of the epidemic is accelerating. President Xi warned that the situation was serious, but not unsurmountable.

“As long as we have steadfast confidence, work together, [rely on] scientific prevention and cures, and precise policies, we will definitely be able to win the battle,” President Xi told a politburo meeting, according to Xinhua.

It is thought that the deadly coronavirus, 2019-nCoV has originated from wild animals, such as bats, but science is still out to confirm the details.

In short, the Government of China deserves high-flying congratulations for the efficient, rapid sanitary measures it has taken to avoid further infection – putting about 50 million people in a state of quarantine, blocking potentially dangerous travel routes and checking travelers for possible symptoms.

The timing of the outbreak has an additional dimension of pain and suffering, as it affects and hinders people’s celebration of the New Chinese Lunar Year’s joy of visiting families and of togetherness. On a tertiary plan, it also affects the retail economy.

Chinese doctors and nurses have already healed several dozen cases. Chinese scientists in collaboration with Russian scientists are accelerating their research into developing a vaccine against the virus. Indeed, there is no country in the world that has ever achieved with such ardor, efficiency and love for the people, progress towards isolation of a potentially highly infectable and deadly disease, preventing millions from infection and providing them with protective as well as curative measures, and by setting up a countrywide impenetrable health surveillance mechanism.

There could not be a clearer sign, that the Government of China is making every effort for the betterment and the well-being of its population. This is also reflected in the high esteem and credibility the Chinese people entrust in their government. – Something not heard of in the west – not by far.

Rather to the contrary: in the west disease means foremost business and that (business) model of health care is steadily increasing, treating sick people like a “market” – and those not yet sick, as a potential market. The medical industry, is one of the most ferocious money-making apparatuses, next to the war industry.

It’s more, the big western bought and manipulative media have immediately put the blame on China. They are demonizing and slandering China, for insufficient hygiene, for medical negligence – it is one more accusation of the “yellow peril” causing worldwide danger. A horror of western attitude and injustice.

Aside from such lies and false propaganda, let’s look at the context. In the USA alone, the regular influenza causes every year several thousand deaths, and that despite country-wide carpet vaccination, and in some states forced vaccination. The 2019/20 flu-season has already claimed more than 7000 reported deaths and uncounted cases of serious flu infections; and that only in the United States. We are talking about a country of some 350 million people.  The statistics of this flu-epidemic could be expanded to a much larger dimension throughout Europe and the rest of the western world – and the order of magnitude would be even more overwhelming.

Yet, China, with a population of some 1.4 billion people, an outbreak, where up to this writing less than 3000 people have been infected with the new 2019-nCoV virus, and the death toll stands at below 100, the country is being badgered non-stop for being at the origin of this new disease.

Let me be clear, China does not need or want to compare herself to the west, nor does she want to measure her degree of efficiency in mastering the disease and dealing with the disease’s consequences against the west. Not at all. It’s not part of the Chinese philosophy. – However, WHO immediately calls the outbreak a potential pandemic, thereby frightening the public at large with yet another danger coming from the east, from China.

The Chinese Government and the Chinese scientists work for the people, to contain the outbreak to the extent possible. And they will ‘win’; their determination like with most everything China engages in overcomes almost all obstacles. What China has already achieved in stopping the disease from seriously spreading within China and to other countries is simply remarkable. It is what no other country in the world would have achieved in this short period.

China does all this quietly, no bragging. It is simply an endless flow of creation for the well-being of her population and for harmony – and eventually for a peaceful, trustful cohabitation of the people with their government. People willingly participate in this mammoth effort to contain and cure the disease, willingly, despite the suffering of many for not being able to visit their families during that highly revered Chinese New Year, the New Lunar Year celebration which in magnitude and importance would be the western equivalent of Christmas. Having said this, it should also be noted that this case of 2019-nCoV is curiously similar to other CoronaVirus diseases, like the Middle East Respiratory Syndrome – MERS, first found in Saudi Arabia (2012) and then it spread to other Middle Easter and Sub-Saharan African countries; and the Severe Acute Respiratory Syndrome (SARS), first discovered in China in 2002, spread around the world but was quickly contained and caused no know infections after 2004. Both are coronaviruses, suspected having been laboratory-made, with animal trials, and the viruses’ transfer to humans was only possible with human assistance. Then the viruses mutated to make human-to-human infection possible. Bothe SARS and the new 2019-nCoV virus also have the particularity of affecting primarily people of the Chinese race (see also https://www.globalresearch.ca/chinas-new-coronavirus-an-examination-of-the-facts/5701662).

There are some 100-plus CIA / Pentagon sponsored clandestine and semi-known laboratories spread throughout the world – laboratories to fabricate and test agents for biological warfare. A few years ago, one such laboratory was discovered and reported on in Ukraine. They were working on a virus affecting the “Russian Race”. Since there is no homogenous Russian Race – their initial trials supposedly failed. Since the empire never gives up in its evil attempts to dominate the world, we can assume that research on race directed bio-agents continues.

This western, especially American (CIA, Pentagon, NATO) project to develop bio-chemical weapons to kill people by disease rather than bullets and bombs – it is much cheaper! And less obvious – does exist. You may draw your own conclusion on whether SARS and the new 2019-nCoV fits that pattern. The timing of the appearance was especially curious. It was first reported on 31 December 2019 in Wuhan (the center of China) – and then expanded rapidly, so that it interfered with China’s most important Holiday, the Lunar New Year. It could, of course, be just coincidence. – One of Washington’s “low-grade” warfare models is destabilizing China (and Russia for that matter) with any means. With the objective of destabilization, China is constantly being harassed and aggressed – see Hong Kong, Taiwan, the Uyghurs in Xinjiang, Tibet, the tariff wars – and why not with a contagious virus, a trial for a potential pandemic?

What can be observed and even the west must notice to their chagrin and frustration – is China’s extreme resilience and capacity to adapt and resist – to resist with powerful minds and ingenuity that saves her people. And that without counter-aggression, without even an accusation and never a threat. This is China’s way forward: a steady flow of endless creation, avoiding conflict, no dominance, but seeking harmony by building bridges between people and among countries and cultures – creating understanding and wellbeing, towards a multi-polar world. A model for mankind? – If only the west would open its eyes and wake up.

Peter Koenig is an economist and geopolitical analyst. He is also a water resources and environmental specialist. He worked for over 30 years with the World Bank and the World Health Organization around the world in the fields of environment and water. He lectures at universities in the US, Europe and South America. He writes regularly for Global Research; ICH; RT; Sputnik; PressTV; The 21st Century; Greanville Post; Defend Democracy Press, TeleSUR; The Saker Blog, the New Eastern Outlook (NEO); and other internet sites. He is the author of Implosion – An Economic Thriller about War, Environmental Destruction and Corporate Greed – fiction based on facts and on 30 years of World Bank experience around the globe. He is also a co-author of The World Order and Revolution! – Essays from the resistance. Peter Koenig is a Research Associate of the Centre for Research on Globalization.