In addition to the Chinese mainland, the struggle against the new cases and outbreak clusters of the COVID-19 is shifting to countries outside China.

As the COVID-19 is now beginning to go global, a set of new risks loom in the horizon, including (but not limited to) international complacency, botched quarantines, “super-spreaders,” failed evacuations and poorly monitored self-quarantines. Additionally, potential new risks include weaker health care systems, untraceable virus clusters, extended incubation periods and local transmissions — along with the resurgence of old risks and clusters.

While there still remains a “window of opportunity” to stop COVID-19 from becoming a broader global crisis, that window is now closing.

While these numbers will continue to climb, the low starting-point suggests China’s draconian measures may have saved many lives within and outside China. The same cannot be said about preemption measures outside China’s borders.

Risk of international complacency (WHO member states). On February 4, the WHO’s chief Dr. Tedros said that, after almost a month of international crisis and global alert, three of five WHO member countries outside China had failed to provide adequate information in a timely manner.

As the timeline suggests, the number of cases outside China soared after February 4 and the missed opportunities of greater international cooperation (Figure). 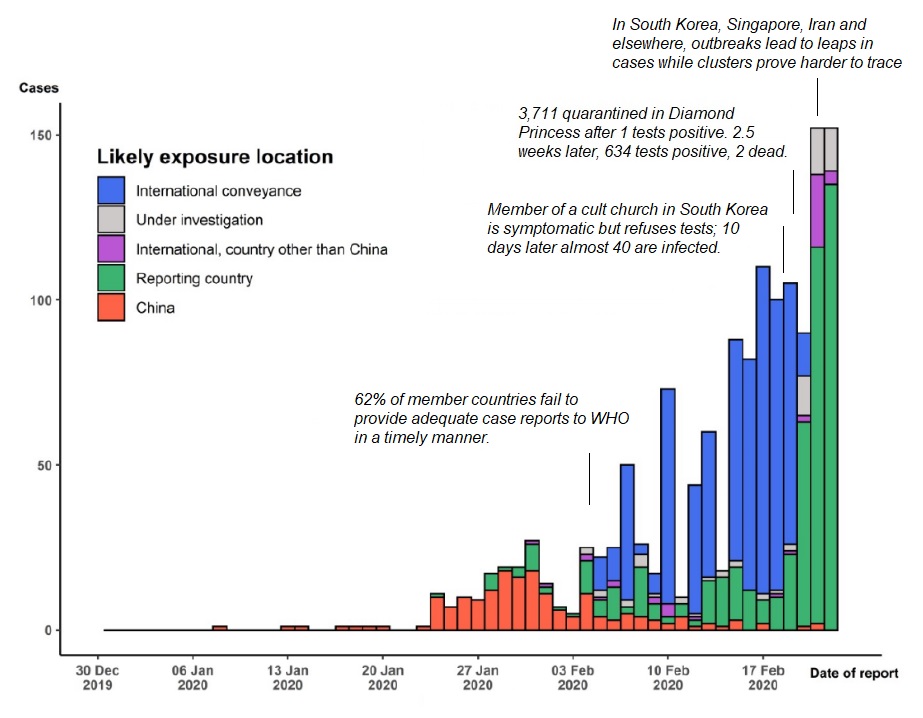 Risk of botched quarantines (Diamond Princess Cruise). On February 3, more than 3,700 passengers and crew were quarantined by the Japanese Ministry of Health after one passenger on the ship tested positive for COVID-19. Just two and half weeks later, some 635 passengers tested positive for the virus, while two passengers had died after contracting the virus. It is this cruise and its sub-standard quarantine measures that account for almost half of all international cases.

Risk of “super-spreaders” (South Korean cult church). From the start, potential super-spreaders who could endanger others have been a great concern. On February 10, a 61-year old woman, who worships at the Daegu cult church, developed fever but twice refused to be tested for the virus claiming she had not recently travelled abroad. After she had attended at least four services before the diagnosis, 40 other members of the church were infected.

Risks of potential evacuation failures (State Department vs CDC). As countries seek to rescue citizens from infected territories, failed evacuations can pose new risks. Last week, the US Centers for Disease Control urged to keep 14 infected US citizens in Japan, yet the State Department put the infected on a plane with healthy people claiming that a plastic-aligned enclosure would mitigate infection risks.

Risks of poorly-monitored self-quarantines (several countries). On February 21, California health officials said that 7,600 people who had returned to the state after visiting China during the virus outbreak had been asked to quarantine themselves at home this month. Self-quarantine can help health officials to allocate vital resources to the most critical cases, yet any laxness in self-quarantine could endanger far more lives. Moreover, the CDC is not tracking how many people from each US state who have returned from China have been asked to isolate themselves. Nor are there clear and forceful federal guidelines; rather local health departments have discretion in how to carry out the quarantines.

In addition to the threats that we know, there are potential, more challenging risks which we understood poorly or don’t even know about.

Risks of untraceable virus clusters (several countries). In South Korea, Singapore and Iran, virus clusters have led to leaps in cases. As it is becoming harder to trace where the clusters started, the virus may be spreading too broadly for traditional public-health steps to contain it. That highlights the importance of Chinese standard-setting measures that several countries are now emulating in part or fully.

Risks of weaker healthcare systems (poorer developing countries). In late January, the WHO declared the ongoing virus outbreak a “public health emergency of international concern” (PHEIC). The goal was to boost international coordination against the expected internationalization of the outbreaks. As WHO officials have repeatedly noted, the PHEIC was motivated by the possible effects of the virus, if it would spread to countries with weaker healthcare systems.

The case of Italy is particularly intriguing. It remains the only European country to have barred flights to and from China, Hong Kong, Macau and Taiwan. And yet, as Health Minister Roberto Speranza has said, Italy is now seeing the kind of “cluster” of cases, which Germany and France have seen. It is centered in the regional towns of Lombardi, only 60 km southeast of Milan, the country’s business hub.

The world’s most vulnerable

The big question is how forcefully the virus will arrive in the rest of Americas and particularly Africa.

Risks of local transmission. On Feb 21, when the virus had spread to 25 countries, local cycles of transmission had already occurred in 12 countries after case importation. In Africa, Egypt has so far confirmed one case. As such cases are expected to proliferate, the probability of such risks will climb accordingly.

In modeling simulations based on air travel, new research indicates that the highest importation risk involves a set of countries – including Egypt, Algeria, and South Africa – that have moderate to high capacity to respond to outbreaks. In turn, countries at moderate risk – including Nigeria, Ethiopia, Sudan, Angola, Tanzania, Ghana, and Kenya – have variable capacity and high vulnerability.

Several African countries are already struggling to contain still another Ebola virus outbreak, while others are fighting against the worst locust in decades, particularly in East Africa. Having already decimated crops throughout Ethiopia, Kenya and Somalia, Eritrea and Djibouti, locust swarms threaten South Sudan, Uganda and Tanzania, while breeding along the both sides of the Red Sea in Egypt, Sudan, Eritrea and Saudi Arabia.

As many countries in Africa are struggling to step up preparedness to detect and cope with COVID-19 virus importations, resources will ultimately have to be prioritized, particularly in countries with moderate risk that might be ill-prepared to detect imported cases and to limit onward transmission.

What happens in Africa may not stay in Africa. Adverse feedback events could compound inter-regional challenges.

Old risks could resurface along with the new

As new risks are evolving, old risks are not yet fully contained and can still pose lingering threats in China and particularly in countries outside China.

Risk of “closed spaces” (prison systems, nursing homes). On February 21, Chinese prisons reported some 500 new cases of infections among inmates and guards. It was followed by news of infections in nursing homes. Both cases highlight the high transmissibility of the virus in spaces of confinement.

Risks of new potential mutations and infection scenarios. The plausible current assumption is that, like seasonal influenza, the COVID-19 is causing mild and self-limiting disease in most people who are infected, with severe disease more likely among older people or those with comorbidities (e.g., diabetes, pulmonary disease).

But if the scenario changes towards wider community transmission with multiple international foci (or toward new kind of mutations), current mitigation procedures will prove inadequate and countries will be more likely to emulate Chinese measures.

If the containment measures will not be effective in the early phases of the virus outbreaks, the human and economic costs will compound dramatically over time.