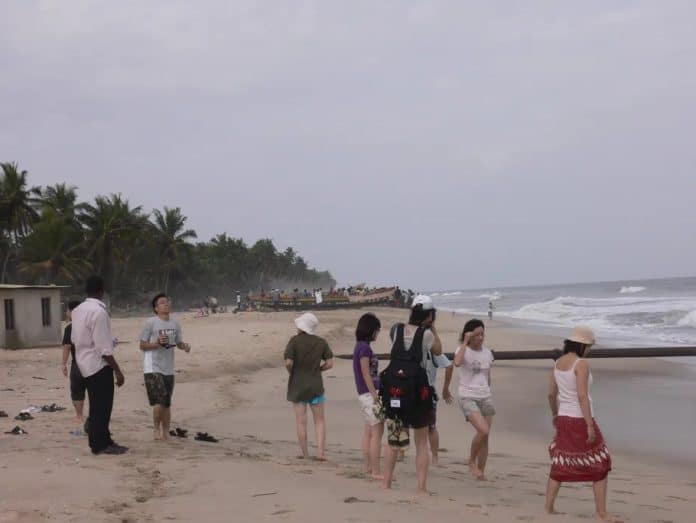 Over the past two decades, there have been many debates about China’s growing engagement in Africa. In these discussions, the more than one million Chinese expatriates, business people and labourers who come and work in Africa are often seen only as a byproduct of an overall “outbound” China. And they are often studied as isolated sub-groups: expatriates of Chinese state-owned enterprises, traders, construction workers, and so forth.

As a result, there’s no holistic understanding of the mechanisms underpinning emigration from China to Africa.

What motivates these new migrants to come to Africa? Who is more inclined to make the move? How have the ongoing market and social changes within China influenced them?

These were questions I explored in my ethnographic survey of Chinese migrants, based on fieldwork in Ghana between 2016 and 2019. There is currently no fixed data on the number of Chinese in Ghana although some estimates place it at about 30,000. They are involved predominantly in trade, infrastructure and mining.

China’s drastic political and economic changes in recent decades, coupled with its changing positioning in the global economy, have created a distinct social infrastructure for emigration. I found that opportunities for social mobility, rather than simply economic incentives, generated emigration flows to countries like Ghana.

This insight is useful for sociologists and policy makers to understand migration drivers, diaspora-homeland relations, and contemporary migration in the Global South.

Chinese emigration to the world

Political and economic changes in post-communist China have driven massive human movement both inside and outside the country. Since the late 1970s, institutional reforms and market evolution in China have created a new “mobility regime”. Population movements have been deregulated and even encouraged in some regions for development needs.

China’s rapid integration into the global economy also opened the door for outward migration. In particular, since the 2000s, Chinese emigration to non-traditional destinations in Africa, Eastern Europe, Latin America, the Caribbean, and other parts of the global south has grown significantly.

A prevailing explanation is that China’s economic development gives Chinese firms and entrepreneurs competitive advantages in overseas markets, which further fuels the demand for labour migrants.

This perspective points out the importance of the new migrants’ economic ties to their homeland but says little about who is most likely to leave China for Africa. It doesn’t consider the industries, localities, and personal characteristics that are linked to migrants and would-be migrants. Doing this requires looking inside contemporary China, at how migrants’ aspirations and motivations stem from China’s political-economic changes and social stratification order.

‘Squeezed out’ to Africa

Many industries are facing market saturation and intensified competition. Companies are compelled to explore overseas markets, especially underdeveloped ones. In the last decade, China’s economic restructuring and declining competitiveness in manufacturing have forced many export-oriented firms to penetrate African markets where their products match local demand. The same logic applies to industries of infrastructure, telecommunications and construction. The flow of excess capital and labour to Africa is seen as a “spatial fix”.

At the micro-level, contemporary Chinese society is marked by social inequalities in the distribution of income, wealth and, more importantly, opportunity. The gradual closure of ways to move up the social ladder drives individuals, especially those who are marginalised in their microcosm, to migrate in the hope of achieving their dreams in a foreign land.

Africa as a new ‘social ladder’

As I found in my study, venturing to Africa gives migrants an opportunity for social “reshuffling”. It allows them to get around the social and institutional barriers to achieving a “class leap” in their motherland.

For instance, in China, people are labelled by the “hukou”, a residency registration system that classifies people as urban or rural. But in Ghana that doesn’t apply – they are not treated differently according to that classification. Their education or family background in China is not a major determinant of social capital in Ghana. Instead, human capital and entrepreneurship are better rewarded.

Social repositioning brings migrants more than simply linear upward mobility in terms of socio-economic status. It also allows flexible identity conversion. For instance, some Chinese start their own businesses in Ghana with a small investment and become independent entrepreneurs over time. The migrants regard the fairer opportunity structure and more flexible space for career and identity transitions as more important drivers than incentives like wage differentials or social benefits.

I would therefore argue that economic motives for migration have multiple layers. What Chinese migrants in Ghana hope for is a step up in social status.

Where are their journeys leading?

The migrants’ initial aspirations are undoubtedly embedded in China’s stratification dynamics. But their aspirations are constantly changing, and so are their ties to the homeland.

In the process of adaptation and integration, incentives such as self-esteem and social acceptance are important drivers for settling in the host society. I found that many new Chinese migrants felt that life in China was a “rat race”. The anxiety and frustration of competition and inequality were not the price of achieving a better life, but a meaningless drain. Hence, they gradually let go of the “Chinese dream” of higher social status that motivated their departure.

Some Chinese migrants choose to stay on the “new ladder” rather than return to the old one. But it’s not certain that they will become permanent settlers in Africa. In fact, they exhibit a highly floating character. Many of them become circular migrants between China and Ghana, stepwise migrants to the west, or, very commonly, sojourners bouncing between various places.

This article was originally published in The Conversation on 7 April 2022. It can be accessed here: https://theconversation.com/what-drives-chinese-migrants-to-ghana-its-not-just-an-economic-decision-177580

Jinpu Wang is a Ph.D. candidate at the Department of Sociology, Syracuse University, USA. His ongoing project investigates the links between recent Chinese emigration to West Africa and China’s political-economic changes. His research outcomes have been published in peer-reviewed academic journals including Journal of Ethnic and Migration Studies, Asian Ethnicity, Journal of Small Business and Entrepreneurship, among others.