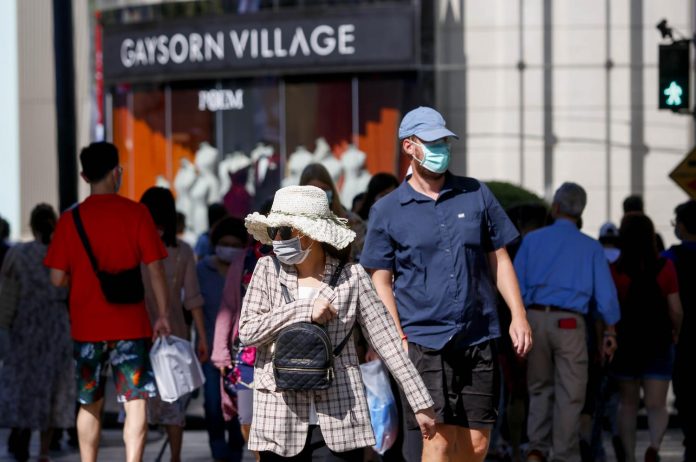 The virus outbreak is showing possible signs of steadying, although the number of accumulated cases will continue to rise. The economic impact on the ASEAN depends on the outbreak’s duration and severity.

With the new coronavirus – the 2019 novel coronavirus acute respiratory disease (2019-nCoV ARD) – there are now (2 pm Wuhan time, Feb 11) more than 42,600 confirmed cases worldwide. If the current pace prevails, that figure will exceed 50,000 in the coming days.

And yet, there may be something else going on behind the reported figures.

On the one hand, the number of confirmed cases outside China is less than 500, and there have been only two deaths, which both are associated with the virus epicenter Wuhan. While these numbers are likely to increase in the near future, the low starting-point suggests that China’s costly and draconian measures may have saved many lives within and particularly outside China.

More importantly, the pace of the contagion may be decelerating in China. In international media, the spotlight is mainly on the absolute numbers of accumulated cases and deaths, which are likely to increase. And yet, the relative increase of these accumulated cases has decreased ever since mid-January.

Even more importantly, the relative daily increase of new cases, which have critical impact on the longer-term duration and severity of the outbreak, may be amid a crossroads.

The confirmed new cases increased steadily from mid-January soaring to almost 3,900 on February 4. Since then the numbers have fallen below 2,700. In relative terms, the change has been almost progressive, having plunged from almost 350% to negative (Figure).

Figure     Is the virus outbreak at a crossroads? 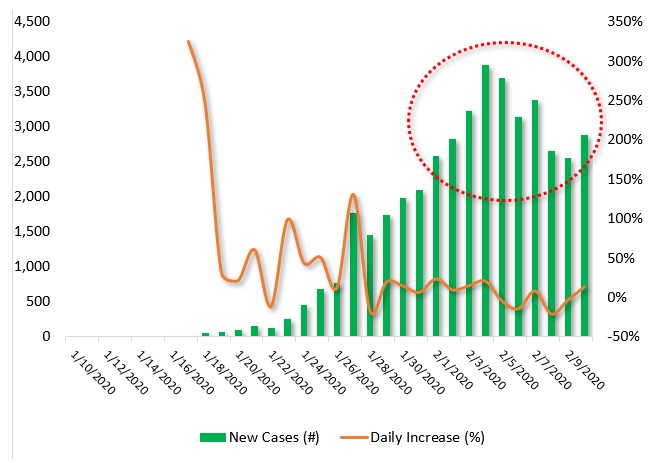 The big question is, will the trend prevail. While the data could indicate a possible turnaround in the virus outbreak, there is no assurance that the deceleration will prevail. It is well known that virus trend lines can zigzag. Consequently, complacency in the struggle against the outbreak is no option.

Also, all projections rely on data accuracy and presume the absence of adverse mutations within and outside China. Furthermore, the trend lines are predicated on the idea that there will be no new, major outbreaks as people in China are now returning to their homes after the holiday period. Finally, the trend is predicated on the idea that containment will succeed outside China, where precautions have been lagging in many countries, including high-income nations.

As WHO chief Tedros Adhanom Ghebreyesus has warned, confirmed cases of coronavirus being transmitted by people who have never traveled to China could be the “tip of the iceberg.”

Since mid-2018, ASEAN countries have suffered collateral damage associated with the US-Sino trade friction, slowing world trade and eroding global growth. Even before the outbreak, regional growth prospects were downgraded by 0.3-0.4 percentage points for 2019-2020. Now, Southeast Asian economies may face new downgrades associated with the outbreak’s likely economic impact (on the basic scenarios, see my previous TMT column of Feb 3, 2020).

Last December, the Asian Development Bank (ADB) revised its forecast down to 4.4% for 2019 but maintained at 4.7% for 2020. The latter was predicated on the anticipated mild recovery in China and the US. It will be downgraded.

Prior to the virus outbreak, growth forecasts were downgraded for Singapore and Thailand, but upgraded for Brunei and Vietnam, with the remaining ASEAN economies on track to meet forecasts, despite export declines and weaker investment weighing on growth prospects.

In early 2020, downgrades are likely to deepen in Singapore and Thailand, while positive prospects in Vietnam will not prevail. Growth forecasts in Taiwan and East Asia – South Korea and Taiwan – will be penalized, due to anticipated supply chain disruptions, particularly in electronics, machinery and textiles.

Growth prospects in Singapore have eroded significantly and will be compounded by the outbreak. The 2020 real GDP forecast could be downgraded to less than 1%. In Hong Kong, political volatility coupled with the outbreak will extend the technical recession into the 1st quarter.

The rest of Southeast Asia – Malaysia, Indonesia, Lao, Cambodia, Myanmar, and the Philippines – will find it hard to stay on track with forecasts. In the past year, softening domestic investment exacerbated export woes in most larger economies—Indonesia, Malaysia, Philippines, Singapore, and Thailand—but domestic consumption held up to cushion the slowdown.

Since household spending is the first victim of the virus outbreak, larger economies will not be immune to it. But in each case, the specific country impact will depend on the duration and severity of the virus spread.