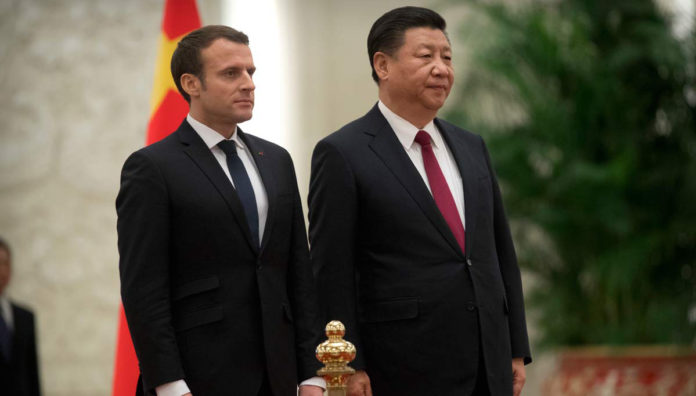 Less than a week ago, President Macron was lambasting Italy for signing agreements with China in the context of their New Silk Road, alias President Xi Jinping’s Belt and Road Initiative (BRI), in the same breath he was criticizing China for attempting to undermine Europe with new trade individual country deals under the pretext of BRI. However, Italy, also scolded by Brussels for her single-handed deals with China, was, in fact, the first G7 country for signing a number of contracts with China to use Italian ports under the BRI, making Italy also the first official EU partner of China’s BRI.

In his zeal of becoming Europe’s new king, Macron also called on all EU members not to go their own way with China, but to jointly negotiate with China “new deals” under the BRI. A joint EU to be strong and equal to the economic and trade behemoth, China. Indeed, solidarity is always ‘good’- but Europe is the last bit of Mother Earth’s territory that has ever shown any solidarity and cohesion among her neighbors and co-members of this illustrious non-union club, called the European Union.

Yet, surprise-surprise! On President Xi’s next stop, Paris, coming from Italy, Macron rolled out the red carpet for the Chinese President and, according to RT, went on to sign billions worth of new contracts with the Asian leader. If this looked like a Macron U-turn, it was a Macron U-turn. As an afterthought he invited German Chancellor, Madame Merkel and EU President Junker to Paris for a photo-Op under the Arc de Triomphe – just to make sure his about-face was not to be misinterpreted.

Peter Koenig is an economist and geopolitical analyst. He is also a water resources and environmental specialist. He worked for over 30 years with the World Bank and the World Health Organization around the world in the fields of environment and water. He lectures at universities in the US, Europe and South America. He writes regularly for Global Research; ICH; RT; Sputnik; PressTV; The 21st Century; TeleSUR; The Saker Blog, the New Eastern Outlook (NEO); and other internet sites. He is the author of Implosion – An Economic Thriller about War, Environmental Destruction and Corporate Greed – fiction based on facts and on 30 years of World Bank experience around the globe. He is also a co-author of The World Order and Revolution! – Essays from the Resistance. Peter Koenig is a Research Associate of the Centre for Research on Globalization.