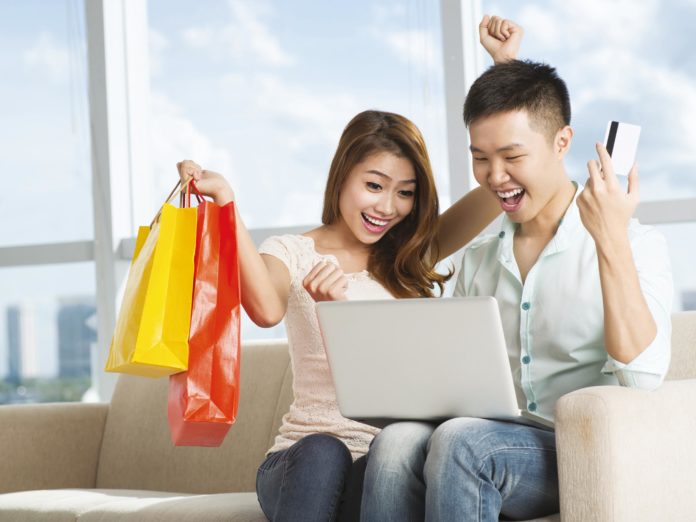 When it comes to social media, social commerce, and the pace of digital change, China is at least 10 years ahead of the West. This article outlines five key reasons why Western marketers need to pay attention now to be successful both in China as well as in their home markets.

Global brands universally understand that the Chinese market has big potential, is growing fast and requires a unique approach. Surprisingly, only very few marketers are trying to study and learn from what makes this market unique and trying to embrace learnings for their home markets in the US or Europe. The ones who do agree that when it comes to social media, social commerce, and the pace of digital change, China is at least 10 years ahead of the West – and due to its scale it will increasingly influence products and services outside of China. There are several reasons why Western marketers need to pay attention to avoid being squeezed out in China, and their home market.

The Economic Power Base is Shifting Back East.

A McKinsey study shows that the world’s economic gravity has for centuries been driven by the East –up until the industrial revolution when it temporarily shifted West (McKinsey Global Institute Report June 2012: Urban World: The cities and the rise of the consuming class). To quote the Nobel Prize winning economist Joseph E. Stiglitz “2014 was the last year in which the United States could claim to be the world’s largest economic power. China enters 2015 in the top position, where it will likely remain for a long time, if not forever.” (http://www.vanityfair.com/news/2015/01/china-worlds-largest-economy) In fact, China is already a top three market for many global brands across a broad spectrum of industries such as mobile phones, automotive, fashion and beauty.

Marketers hear these sorts of statistics all the time. However, what is often misunderstood is how savvy and progressive Chinese consumers are and that consumer behaviour will not be impacted by the recent turbulence of the Chinese stock market.

China’s middle class is predicted to grow from 450 million in 2013 to 800 million by 2025 (http://www.travelweekly.com/Plus/Travel-Trend/Chinese-Middle-Class-Travel-Helen-Wang/). A Brooking’s Institution Study conducted in 2010 predicted that by 2030 66% of the global middle class will be in Asia (compared to 6% in the US – see graph below). 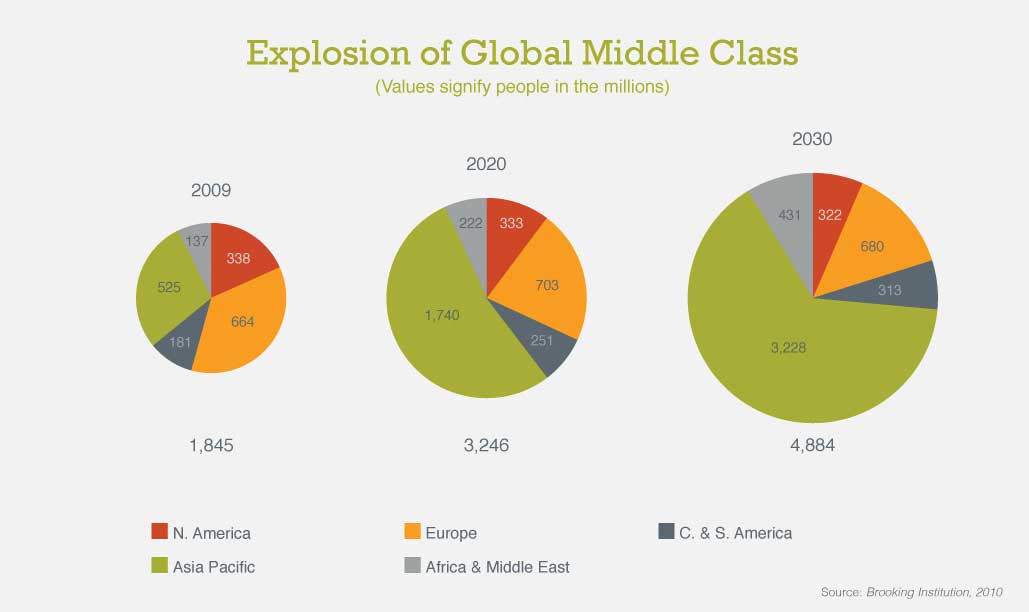 As the economic power is shifting East and purchase power is rising, the Chinese consumer will set market trends. As a result marketers will need to develop products and services that are tailored for the needs and preferences of the Chinese consumers first and then adapted for other markets. This will not only be the case for China based firms but also Western brands. Hence, consumers in Europe and the US will need to get used to Chinese tastes.

The Chinese Consumer is Super Digital and Hyper Social.

Chinese consumers are young, value-seeking, rapid adopters of new technologies and mobile-centric. For example, Burberry’s shoppers in China are on average 20 years younger in China than in developed markets (Source: ‘Six Eye-Opening Stats About Social Commerce in China, Forbes). Last August, Smart sold 388 cars in three minutes on the mobile messaging platform WeChat. And, on November 11, or 11/11, is “Singles Day” (China’s version of Cyber Monday) broke all records in online sales last year generating a staggering 5.7 billion US$ sales in one day. That is more than three times the scale of Cyber Monday.

Chinese consumers heavily rely on peer recommendations, which online retailers have fully embraced. Today, sellers can disappear (or be catapulted to success) simply based on consumer reviews. The Chinese internet user is an extremely active content creator. According to Forrester 85% of online Chinese citizens create or organise content on the web versus 25% in the US. Unlike shoppers in the West, Chinese shoppers are happy to share their shopping experience through platforms like WeChat. Today’s Chinese digital consumers have a lot in common with millennials in the West. Marketers are well served to observe this audience, employ Chinese staff to identify the communalities and how Chinese brands succeed in this environment.

There is a fierce battle occurring between the digital ecosystem titans Alibaba and Tencent – both are aggressively pursuing a diverse set of services (ranging from messaging, gaming, social networking, social commerce, commerce, entertainment, travel, delivery, financial services, etc.) under a single umbrella. (See chart below) 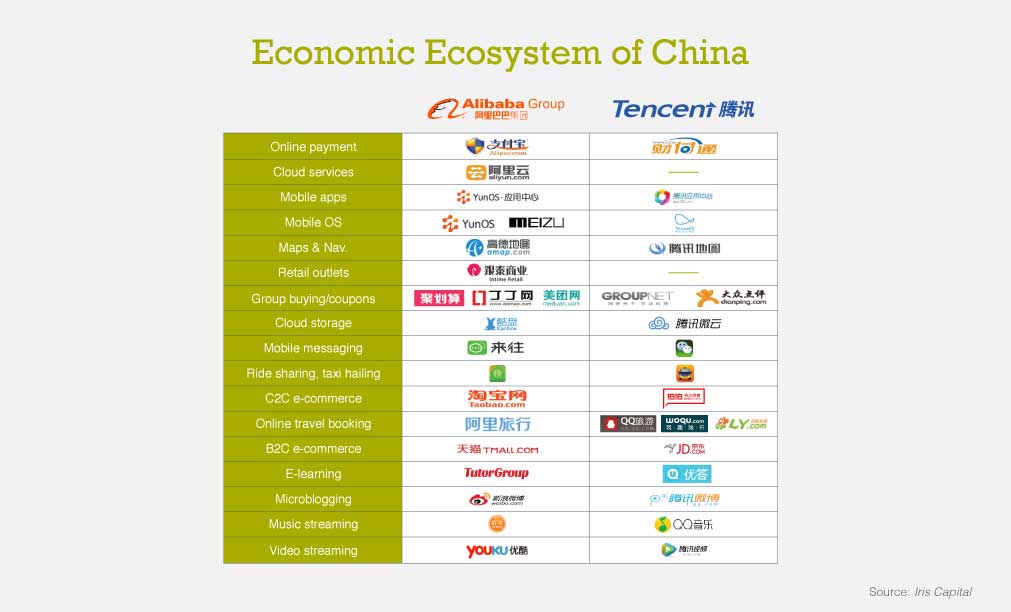 Brands left out of the main ecosystems have very little chance to create economic value for themselves in the Chinese digital economy – Western brands need well thought through strategies on how to partner with local Chinese platforms to succeed and protect their brands.

It is wrong to conclude that the local digital players are simple copies of their Western counterparts.

With over 480 billion US$ worth of transactions made in 2014 Alibaba is the undisputed world leader in eCommerce. In comparison, Amazon reported sales of 74.4 billion US$ for fiscal 2013 (http://www.forbes.com/sites/walterloeb/2014/04/11/10-reasons-why-alibaba-is-a-worldwide-leader-in-e-commerce/). The Alibaba Group – which includes TMALL, Taobao, AliPay, Alibaba Cloud – has covered all aspects of eCommerce and created a network effect with a massive customer base.

With over 480 billion US$ worth of transactions made in 2014 Alibaba is the undisputed world leader in eCommerce. In comparison, Amazon reported salesÂ of 74.4 billion US$ for fiscal 2013.

For example, while TMALL/Taobao – a business-to-consumer eCommerce site which accounts for roughly 80% of all online purchases in China – resembles a combination of Amazon and Facebook, its business model is very different to Amazon. It operates as a marketplace and earns a commission for facilitating transactions between sellers and buyers. Therefore, unlike Amazon, it facilitates transactions and does not compete with sellers. Alibaba succeeds when its sellers succeed and it does not launch competing products.

Or take Tencent’s WeChat. It is far more than Western messaging services like WhatsApp. Its services go far beyond text or voice messaging. It is rapidly becoming the hub of Tencent’s digital ecosystem, which includes eCommerce, taxi and ride sharing, payment services and more.

It is important to understand that the dominance of Chinese local Internet players is the result of delivering better consumer experiences and cannot be reduced to government intervention. The Chinese digital platforms have understood early on that for their consumers shopping is a form of entertainment. Therefore, they merged social interfaces with eCommerce features to capture the attention of their users way beyond the actual transaction – content and commerce have always been closely linked together to create an immersive experience. In China, online shopping is a way to kill time; in the West as a way to save time.

It is important to note, that the rules for success from the West do not apply to China. The consumer engagement model and the digital ecosystem are fundamentally different. Global brands have started to realise this. For example, GrandVision – one of the world’s largest optical retailers – is launching their next generation omni-channel presence. They purposely picked China as the launch market from which they will roll-out their new technology platform, website, digital in-store, mobile and social experience to other geographies. The underlying insight is that the Chinese market is ahead of the West.

WeChat’s services go far beyond text or voice messaging. It is rapidly becoming the hub of Tencent’s digital ecosystem, which includes eCommerce, taxi and ride sharing, payment services and more.

The abundance of advertising dollars in the West – and therefore ad-based revenue models – have created sub-optimal consumer experiences on most Western social media platforms. Whereas Chinese players have understood early on how to harness the power of recommendations and have built their business models around the “fan economy” Western players are only now catching up. In the process, Chinese firms have not only created large scale and highly profitable businesses that are now expanding into the international markets – with big and ever growing war chests. Now is time to wake up and study their success before the likes of Alibaba, Tencent or Baidu begin to make big inroads into your home market.

When searching for inspiration, new business models and the evolution of the digital consumer, executives must look to China and not just the Silicon Valley.

Since 2013, Michael Karg has been CEO of Razorfish International, the digital business transformation consultancy of Publicis Groupe, having served as COO, Razorfish and Digitas International previously since 2010. He has worked globally over a fifteen-year career. Michael holds a degree in Finance and Accounting and a doctoral degree in Business Administration.