By Jeffrey Towson and Jonathan Woetzel

Six big trends are shaping the country’s future, as investor Jeffrey Towson and McKinsey’s Jonathan Woetzel explain in this excerpt from The One Hour China Book.

A lot of people view China business as mysterious. Relax. Consumers behave pretty much the same everywhere. Competition is pretty much the same everywhere. You just need to ignore the hype and focus on the basic fact that in China today, there are six big trends (exhibit). That’s it. Six trends shape most of the country’s industries and drive much of China’s impact on the Western world. They are like tectonic plates moving underneath the surface. If you can understand them, the chaotic flurry of activity on the surface becomes a lot more understandable – and even predictable.

These trends move businesses on a daily basis. They’re revenue or cost drivers that show up in income statements. Deals, newspaper headlines, political statements, and the rising and falling wealth of companies are mostly manifestations of these six trends, which aren’t typically studied by economists and political analysts. In fact, we happen to think that Chinese politics or political economics are wildly overemphasized by some Westerners in China. So let’s tell a story about each of these megatrends, with some important caveats. They’re not necessarily good things. They’re not necessarily sustainable. For every one of them, we can argue a bull and a bear case. Most lead to profits or at least revenue. Some may be stable. Some lead to bubbles that may or may not collapse. We are only arguing that they are big, they are driving economic activity on a very large scale, and understanding them is critical to understanding China and where it’s headed. 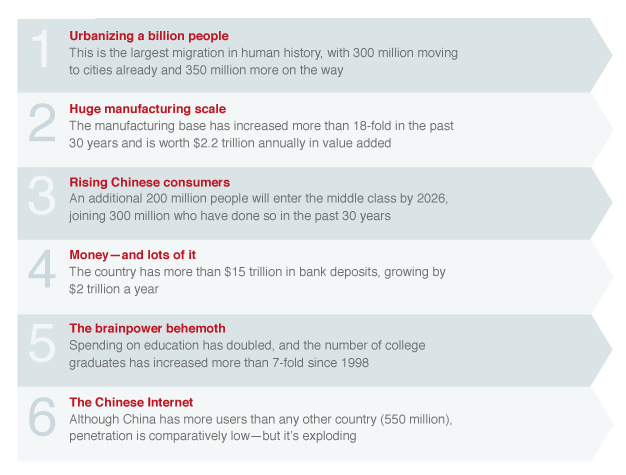 Urbanization is arguably the most important phenomenon shaping modern China. More than 300 million people have moved from the country to cities in the past 30 years, and an additional 350 million are on the way. China has 160 cities with populations of more than one million and 14 with more than five million. Increasingly, these cities are becoming linked, creating urban areas with 30 million people or more – the size of many European countries. Before long, there will be one billion city dwellers in China, placing intense demands on infrastructure such as transportation and public services, as well as on critical resources like clean drinking water. Already, a staggering 40 percent of Chinese rivers are seriously polluted and unfit for use. In an attempt to reverse that, China will invest $636 billion in water-related projects through 2020.

At the same time, urbanization is creating a great deal of wealth. Some 350 million people have moved out of poverty since 1990 in China, with disposable income per capita rising 300 percent during that period. Perhaps the clearest illustration of wealth generation is in real estate, where investment rose to $980 billion in 2011 from just $120 billion in 2003. In fact, by focusing on building basic modern apartments for China’s rising middle class, the country’s leading developer, China Vanke, built some 80,000 apartments in more than 25 cities in 2012 – and recorded annual sales topping 97 billion renminbi (about $16 billion).

Yet it’s perilous to underestimate Chinese manufacturers and the benefits of scale. Perhaps the most global Chinese company today is telecommunications giant Huawei Technologies, which grew rapidly by developing lower-priced equipment for second- and third-tier cities and avoiding competition from global manufacturers in major markets. When Huawei expanded abroad, it targeted less-developed areas in Southeast Asia, Africa, and Eastern Europe that had been neglected by major global players. By the time Huawei became the world’s top telecommunications-equipment company in 2012, it was earning more than two-thirds of its $36 billion in revenue outside of China. And at home, its scale has allowed it to make more sophisticated products and move into first-tier cities.

Huawei became the world’s top telecommunications-equipment company in 2012, it was earning more than two-thirds of its $36 billion in revenue outside of China.

The American middle class was the world economy’s growth engine throughout the 20th century. Now, the engine is the Asia–Pacific region, which will account for two-thirds of the world’s middle class by 2030. While Chinese consumers’ focus on “value for money” has driven the rise of companies such as apartment builder China Vanke and Tingyi Holding Company – the business behind China’s dominant instant-noodle brand – buying habits are changing. As urbanization accelerates, consumer
spending is becoming more like that of the West’s middle class. Urban Chinese are shopping to meet emotional needs, driving a skyrocketing demand for middle-class goods, food, and entertainment.

As an example, China consumed more than 13 million tons of chicken in 2012 – more than the United States. Tyson Foods’s China operations has facilities able to process more than three million chickens per week, and Chinese chicken consumption, which grew by 54 percent from 2005 to 2010, is expected to grow an additional 18 percent annually during the next five years. For additional evidence, look no further than the fact that the largest Chinese acquisition of a US company had nothing to do with technology, cars, or energy. In 2013, Chinese Shuanghui International spent $7.1 billion to buy American Smithfield, the world’s largest pork producer and processor. It’s not surprising, then, that agribusiness is one of China’s hottest new industries.

Almost every aspect needs to be improved, from land and water use to logistics and retail. Legend Holdings, the parent company of Lenovo, now lists modern agriculture as one of its five core areas, with a portfolio that includes kiwi and blueberry farming.

Money – And Lots of It

China has more than $15 trillion in bank deposits, and that figure grows by $2 trillion every year. Foreign-exchange reserves total $3.5 trillion. China is the single largest foreign purchaser of US government debt. And its yearly trade surplus with the United States has grown from $10 million in 1985 to more than $300 billion in 2012. China’s banking and financial ecosystem is moving large amounts of money with increasing efficiency and sophistication – but it may not be stable. The financial-services sector is a great churning mass of high finance, state capitalism, and one-party rule. The Big Four banks can and do function as an arm of the government, pumping lending into big state-owned enterprises and local governments rather than the small and midsize enterprises that employ 80 percent of the Chinese workforce. And this mismatch is driving a surge in the shadow banking system.

In 2003, bank lending accounted for 88 percent of Chinese finance; in 2012, it was 55 percent. A large lending market outside the formal banking system has emerged, complete with underground finance, off-balance-sheet lending, and wealth-management products that pool investors’ money and invest it in various projects. However, most of these wealth-management products do not specify where funds are used. This situation creates risks and affects the dynamics of the Chinese banking sector. Banking is dominated by government regulation while shadow banking is not, which is giving it a competitive edge. And this comes as lending in China has skyrocketed. Central and local governments have financed an estimated $1.8 trillion in debt for projects, but no one really knows how much debt China actually has.

Manufacturing isn’t the only thing that’s happening at large scale in China. The number of college graduates has surged from 1 million in 1998 to 7.5 million in 2012, turning Chinese brainpower into another game-changing phenomenon. There is an explosion in research-and-development investment: in 1993, China accounted for just 2.2 percent of the world’s R&D spending; by 2009, the figure was 12.8 percent and well ahead of most European countries. In 2011, China surpassed Japan and is now second only to the United States. China’s manufacturing giants have massive scale, deep pockets, and access to large numbers of skilled professionals. For example, Huawei has a workforce of 150,000, of whom 68,000 are in R&D; Cisco has 66,000 employees but only 21,000 in R&D.

That’s the good news. The not-so-good news is that there is a substantial disconnect between education, employment, and other markers of Chinese brainpower. One-quarter of the students who graduated college in 2012 failed to land a job by year’s end. Patent filings have surged, but few of China’s patents are of a quality comparable with those in Japan or the West. And even companies focused on cost innovation are not immune to market forces or competition: solar-panel maker Suntech rose rapidly – and fell from the world stage just as quickly.

While search and e-mail dominate online activities elsewhere, in China, users have gravitated to instant messaging and online video.

The Internet is a recent phenomenon in China. About 60 percent of the 618 million Chinese now online have only begun using the Internet in the past three to four years, and overall penetration remains at just 40 percent of the population, compared with approximately 80 percent in the United States. The potential for further growth is underlined by another fact: Internet users in China spend five to six more hours online per week than Americans do. Yet user behavior is also different. While search and e-mail dominate online activities elsewhere, in China, users have gravitated to instant messaging and online video. That online behavior shows no sign of changing, even though gaming and social networking have become popular.

Consider, then, the growth of Tencent. Founded in 1998, it now has more than 700 million accounts for its instant-message service QQ. Over the years, it has added service after service to become, one observer has noted, an amalgam of AOL, Facebook, Gmail, Norton, Skype, Twitter, and Yahoo!, with a market capitalization of nearly $100 billion. In 2013, cofounder Ma Huateng – known as Pony Ma – was ranked China’s third-richest person, with a net worth of $13 billion, according to the Bloomberg Billionaires Index. The company is now spending heavily to expand overseas, particularly in gaming. It bought a majority stake in Los Angeles – based Riot Games in 2011 and a minority stake in Epic Games the next year; it also has partnerships with both Activision Blizzard and Electronic Arts. Tencent has, according to Dean Takahashi of VentureBeat, “the market power to acquire just about every major video-game company in the US.”

China is developing so rapidly and on such a vast divider scale that instability and chaos are natural by-products. It is experiencing regular booms and busts across its economy in the same way a rocket ship experiences turbulence. Yet underlying this volatility are powerful economic and demographic megatrends that are broad and long term. They did not change last year, will not change this year, and will remain the driver of most of China’s daily business and economic activity – for better or for worse.

Jeffrey Towson is a managing partner of the investment firm Towson Capital, and Jonathan Woetzel is a director in McKinsey’s Shanghai office. They are both professors at Peking University’s Guanghua School of Management in Beijing.

This is an edited excerpt from The One Hour China Book: Two Peking University Professors Explain All of China Business in Six Short Stories (Towson Group, January 2014). For more details about the book, visit onehourchina.com.