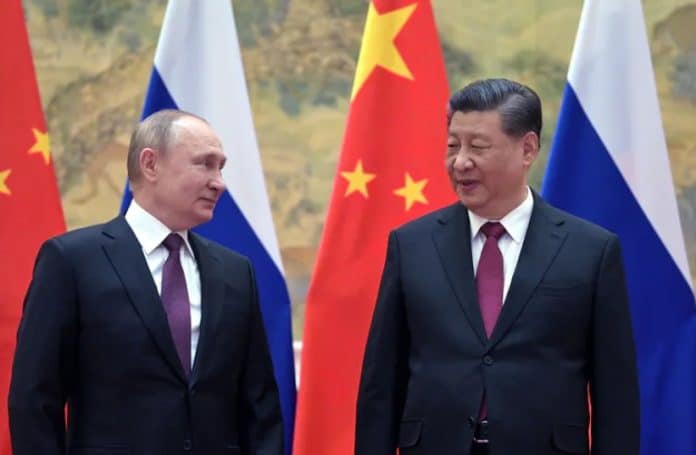 Some early indications suggest that China may want to negotiate on behalf of the rest of the world with Russia on Ukraine. On March 1, Beijing issued a statement saying it “deplored” the outbreak of conflict and calling on Russia and Ukraine to find a solution.

China’s handling of its relationship with the Kremlin during the Ukrainian crisis offers some insights into how it manages strategic but, sometimes, inconvenient partnerships, and the degree of leverage it enjoys over its partners.

If China became a peace broker, and was accepted as one, this would have both pros and cons for the west. On the one hand, it would be a relief for Ukraine and the rest of humanity as it would raise the chances of the bombing and killing stopping. It could also reduce the economic downturns some countries are already experiencing if the sanctions imposed on Russia were removed as part of a deal.

Should China lead parties involved to a new peace, it would be a major diplomatic and public relations victory for Beijing and a setback for the US, whose officials – perhaps, naively – “beseeched” Chinese officials to stop Russia several times. China would be able to present itself as a responsible great power and to convince the west that in future they might have to rely on Beijing’s global influence at a time when US influence is declining.

This could also highlight the failure of Nato’s diplomatic abilities. Finally, it would allow China to showcase its world view on a global stage based on harmonious international relations and how to build peace and stability. Like Russia’s, China’s foreign policy is built around its concerns about the US seeking regional dominance, and a significantly different narrative to how the United States portrays China.

However, being a global negotiator could be risky for China too. Should Beijing insist on mediating but fail, this could signal to the rest of the world that China has limited diplomatic leverage over its partners, especially larger nations.

China’s next moves will depend on the development of the conflict. If the military war remains confined to Ukraine – despite its global ramifications – any further Chinese escalation will be perceived by Russia as interference. Ultimately, this might reduce China’s power to erode the US-led liberal order – Beijing’s long-term priority. However, an eventual military success for Putin might be unpalatable for China.

Examples of China’s thinking on scenarios of this type can be drawn from recent relations between Beijing and Myanmar or North Korea. In Myanmar, China accepted a military coup because the alternative might have been greater instability. Similarly, for years China has seen North Korea as an inconvenient partner. But ensuring a “buffer” between China and the democratic south remains Beijing’s primary interest.

Ultimately, China’s strategic culture and solid finances allow the Chinese Communist Party to accept short-term economic losses if these lead to political gains in the long-term – such as stability or strengthening of its position compared with the west.

It will be weighing up whether it should back Russia over geopolitical issues and in multilateral settings or try to soften the stance of the west.

The calculation might change should war spill over into the rest of Europe – then China is more likely to put pressure on Russia. China does a lot of trade in the Mediterranean, for instance, and this could be a factor. But should China flex its muscles over Ukraine, it will do it in its own way, while perhaps backing Russia on other issues.

There have been fears that China’s opportunism in this crisis could mean an attack on Taiwan. But these concerns may be exaggerated.

Taiwan is better placed than Ukraine to defend itself. Diplomatically, it has a defence pact with the US, via the Taiwan Relations Act. Strategically, it is a not easy to access because it an island with a complex urban geography, energy reserves and an advanced military.

Compared to Putin’s Russia, China is more risk averse. It will want to avoid political costs; and it will only fight a war with Taiwan where some kind of victory is guaranteed. If China opted for a conflict with Taiwan, including a naval and cyber blockade, it would likely not be over quickly.

It is too soon to know what China’s next move will be, but there’s no doubt it is weighing up all options carefully.

This article was originally published in The Conversation on 4 March 2022. It can be accessed here: https://theconversation.com/ukraine-conflict-the-pros-and-cons-of-china-as-global-peace-mediator-178447

Dr Zeno Leoni is a Lecturer in ‘Challenges to the International Order’ at the Defence Studies Department of King’s College London, based within the Joint Services and Staff College (JSCSC) of the Defence Academy of the United Kingdom. He is also an affiliate to the Lau China Institute of King’s College London, where he is co-convenor of the same institute’s policy brief series named China in the World.