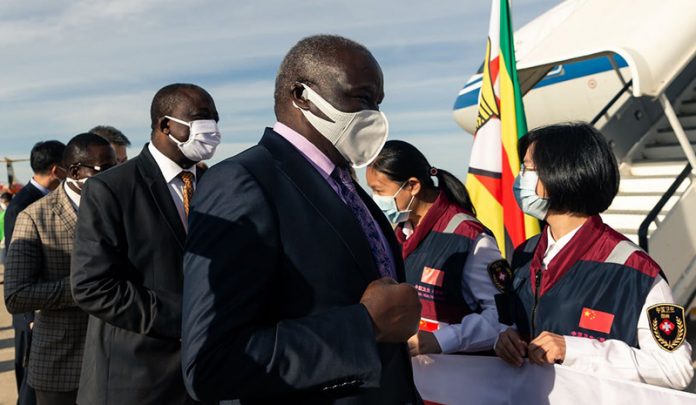 Being Chinese in Africa was the worst possible stigma for much of 2020.

Africans vilified the Chinese, blaming them for the COVID-19 pandemic. At the same time, China was blaming Africans for the pandemic, too. Viral videos in March and April 2020 showed Chinese authorities forcibly evicting Africans from their homes in Guangzhou, China, for allegedly spreading COVID-19.

These actions sparked an uproar on the continent. On social media, there were calls for deporting Chinese residents in Africa. The Twitter hashtag #DeportRacistChinese trended throughout the continent.

Beijing sought to improve its pandemic-era image in Africa with “mask diplomacy,” an effort to supply the continent with vaccines, medical equipment and personnel – and it worked.

As a doctoral student in geography who has written extensively about Africa, I recognize this “mask diplomacy” by China as part of its broader incursion into Africa that arose from the United States’ global retreat.

China’s rising economic influence in Africa has been in the works for two decades.

In North Africa, China has spent US$11 billion since 2015 on the Trans-Maghreb highway – from the Western Sahara to Libya – that will connect 60 million of the region’s 100 million people.

In East Africa, China built a network of roads and a rail line linking Ethiopia and Djibouti that has facilitated trade.

In southern Africa, Namibia partnered with China and the African Development Bank in 2013 on a $300 billion port expansion. And Angola will be benefiting from a $4.5 billion Chinese-funded hydroelectric power plant.

Similar infrastructure projects are in the works in west and central Africa.

Some Western leaders have described Chinese financing mechanisms as debt traps, suggesting they saddle African countries with high debts while increasing China’s power in the region.

But China’s willingness to fund Africa’s infrastructure has been viewed favorably by African leaders – especially as U.S. trade with Africa has steadily declined for a decade.

“They say China has lent too much to Africa,” Rwandan President Paul Kagame said in 2018, “but another perspective of the issue is that those criticizing China on debt give too little, and Africa needs the funding to build capacity for development.”

By 2019, however, it had dropped to $56 billion. Meanwhile, China-Africa trade rose from $102 billion to $192 billion within the same 11-year period. Today, no other single country comes close to matching China’s investments across Africa.

The Trump administration ignored Africa as China exerted its influence. Trump never set foot on the continent as president – the first U.S. president in 27 years to avoid Africa.

Already Africa’s largest economic partner, China was able to pivot quickly after the coronavirus hit to offer the region aid, attention and expertise.

The results were immediate.

Some African leaders who criticized China’s treatment of Africans in China during the early days of the pandemic have changed their tone. Nigeria’s president, Muhammadu Buhari, for example, recently proclaimed that he was “satisfied with the progress of” Nigeria’s relationship with China.

Additionally, Beijing is assuming powerful leadership positions within international institutions that play important roles in Africa. Out of 15 United Nations agencies, China heads four of them, including the Food and Agriculture Organization, or FAO, and the United Nations Industrial Development Organization. No country rivals China in this sense.

Beijing is also courting influence and favor in ways beyond lending.

China canceled $78 million in debt owed by Cameroon in 2019 – money borrowed for infrastructural development – allegedly in exchange for Cameroon’s support for its candidacy as director-general of the FAO. Cameroon, an influential central Africa country, stands out with its diversified economy and strong private sector.

The importance of a new US-Africa relationship

For the U.S., China’s surging influence in Africa has global implications. American companies are increasingly facing tough competition from state-backed Chinese corporations as they bid for contracts in Africa. If left unmatched, Chinese companies could increasingly outcompete U.S. companies.

The Biden administration has vowed to engage more with Africa, likely signaling a long-term U.S. strategy to counter China in Africa.

But China’s strategic vaccine distribution and PPE donations to African countries have built a lot of goodwill and embellished its reputation as a responsible global power acting to protect vulnerable populations in Africa – which the U.S. and Europe have largely overlooked during the pandemic.

The U.S. may be ready to recommit to Africa, but by the time it starts to reengage, it could be too late to outpace China.

Dinko Hanaan Dinko is a Doctoral student at the Department of Geography, University of Denver in Colorado. His research interest lies in the geopolitics of China’s engagements with Africa and its implications on the Great Power Competition.