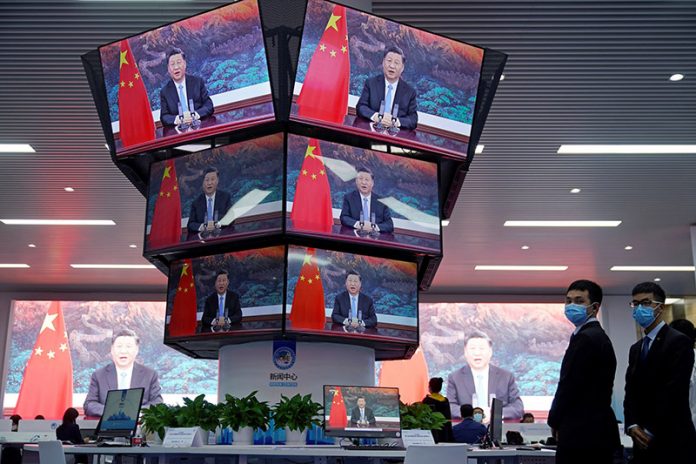 China’s per capita income reached US$10,000 in 2019 – an important milestone in measuring the significant improvement in wellbeing for 1.4 billion Chinese people resulting from the decades-long program of reform and development. In the same year, China’s total gross domestic product (GDP) reached US$14.3 trillion, accounting for 16.4 per cent of global GDP according to World Bank estimates, which matches closely to China’s share of about 18 per cent of global population. Along with the rise in per capita income and total GDP, the Chinese economy witnessed some fundamental changes in the pattern of industrialization, continuing to move towards high value-added production, trade, investment, and progress on innovation and technological change.

The catch-up phase of China’s economic development saw significant progress in innovation and technological change, underpinned by its human capital and increased capacity for innovative activities. China’s spending on R&D climbed 10.3 per cent to US$378 billion in 2020, as reported by China’s National Bureau of Statistics (NBS). According to the NBS, R&D spending accounted for 2.4 per cent of China’s GDP in 2020 (Figure 1). The report shows that, by the end of 2020, China had 522 ‘national key laboratories’ and 350 ‘national engineering research centres’ in operation; some 457,000 projects had been funded by the National Natural Science Foundation of China in 2020 and 3.6 million patents had been granted – up by 40 per cent from 2019. These developments have allowed China to leapfrog its technological capabilities in several key areas such as artificial intelligence, space, medicine and digital technologies, as well as compelling it to pay more attention to the protection of intellectual property rights in the transition from technological imitation to innovation.

According to the Global Innovation Index, which provides detailed metrics about the innovation performance of 131 countries and economies around the world, China was ranked first in innovation performance for middle-income countries and fourteenth globally. The World Intellectual Property Organization (WIPO) reported that its China office received a record total of 1.54 million patent applications in 2018, ahead of the United States, Japan, South Korea and the European Patent Office (EPO). China accounted for more than 40 per cent of the world total.

As technology diffusion opportunities wane, China will need to rely more on domestic innovation to sustain its technological progress.

Since the 18th National Congress of the Communist Party of China (CPC), the CPC Central Committee and the State Council have placed scientific and technological innovation at the core of the overall national development plan and made a series of major arrangements around the implementation of the innovation-driven development strategies. One of the strategies is to implement technological innovation projects performed mainly by enterprises, and this strategy started from the “Ninth Five-Year” National Technological Innovation Program in 1996. The experience of the city of Shenzhen provides some valuable insights on innovation led by Chinese firms. This Southern city is where the headquarters of Huawei, ZTE, Dajiang and Tencent are located and is a leader in innovation outputs (Table 1). One unique characteristics of Shenzhen is that private firms are responsible for the majority of R&D investment. The comparative advantage of Shenzhen in innovation activities comes from two main sources. The first advantage is its unique economic geography. As one of the financial centers in China, Shenzhen possesses the venture capitals that are crucial to high-tech businesses, especially in the start-up period. In addition, the manufacturing industry in Guangdong province is leading in China, which facilitates the transformation of knowledge to products. The second advantage is the business environment in Shenzhen. As Shenzhen is as a newly developed city, there are fewer policy interventions and economic distortions in Shenzhen compared with another city like Shanghai, which has similar geographical advantages. Thus, firms in Shenzhen operate in markets that are more freely competitive and the core competence of Shenzhen lies in its business environment.

While R&D spending is important for creating innovation, it is not necessarily sufficient for improving productivity and growth. One key puzzle has been the declining trend of productivity growth in China since early 2000s despite massive investment in R&D. Hence, policy makers need to think hard about this. For R&D to have positive impact on productivity and growth, there is a growing evidence that various factors including ‘innovation ecosystem’ will be extremely important rather than just expenditure on R&D or patent registration. Institutions, infrastructure, human capital, business sophistication, civil service, intellectual property rights, transparency, creative outputs, civil liberty and political rights all play crucial role in enhancing impact of R&D on growth and productivity.

Yixiao Zhou is a Senior Lecturer at the Arndt-Corden Department of Economics and Deputy Director of China Economy Program, Crawford School of Public Policy. Her research focuses on international macroeconomics and policies, the economics of innovation and industrial upgrading, and issues and policies for development and growth.

Sudyumna Dahal is a PhD candidate in economics at the Centre for Applied Macroeconomic Analysis (CAMA), Australian National University. Previously, he worked at the World Bank in Washington DC, Africa and South Asia. His research interests are at the intersection of macroeconomics, growth and development with a focus on the public policy of developing countries.